You are here: Home / 2006’s Passings of Cryptozoologists and Others

2006’s Passings of Cryptozoologists and Others

Who Did We Lose This Year?

The following is a roundup of 25 notable people linked to cryptozoology, cryptids, Bigfoot studies, aligned fields, and cryptocinema who died in 2006.

Death is a milestone. This gathering is given out-of-respect and in celebration of the significant lives of these people who have passed before us.

It is chronological and begins with an ordinary man unknown to but a few, is followed quickly by a bona fide cryptozoology celebrity, and ends with a writer of whose art inspired many to start their quest and an online friend to several people at Cryptomundo and beyond. Our condolences to their families and friends, good-bye to them, and much appreciation for the many forms of cryptozoology they shared with all of us.

Paul Diehl, 53, died from hypothermia, on Brush Mountain, near Greenwood, Pennsylvania, while looking for Bigfoot. More.

Jacques Boisvert, 73, Memphré researcher, Lake Monster hunter, scuba diver, historian, and ecologist, died in Magog, Quebec. He coined "dracontology" and thus was the first person in the world to see himself as a dracontologist. More.

Reinhold E. Rau, 74, the founder of the Quagga Project and a taxidermist, died at his home in South Africa. More.

Roger Cowburn, 77, of Galeton, Pennslyvania, died. He was an active field researcher for the Eastern Puma Research Network. More.

Richard Fleischer, 89, the director of the 1954 sci-fi movie 20,000 Leagues Under the Sea, died of natural causes at the Motion Picture and Television Hospital in Woodland Hills, California. More.

Paul Gleason, 67, died. Actor Gleason appeared as the no-nonsense disbelieving Sheriff Halderman in Ryan Schifrin’s Abominable, which aired in May 2006, on the SciFi Channel. More.

Karl Pflock, 63, passed away at his home in Placitas, New Mexico. A skeptic, Pflock engaged in a memorable examination of the Patterson-Gimlin Bigfoot film. More here and here.

Arthur Franz, 86, died in Oxnard, California. He is remembered as the narrator of The Legend of Loch Ness (1976), and earlier as the cryptozoological equal to Dr. Jekyll and Mr. Hyde, as Professor Donald Blake in Monster on The Campus, involving a coelacanth and Neanderthal man. More.

Lyle Stuart, 83, a book publisher, died in Fort Lee, New Jersey, and had shepherded the publication of many paperbacks filled with material on Fortean wonders, Bigfoot, and flying saucers in their heyday, the 1970s. More.

Lisa McIntosh, 42, the producer of Mothman: Man, Myth or Monster? died in California of a rare form of cancer. More.

Edwin Tobolowsky, 86, a creature features producer, died in Texas. He produced classic drive-in films, including Creature of Destruction (1967), Curse of the Swamp Creature (1966), and The Eye Creatures (1965) a/k/a Attack of the the Eye Creatures. More.

Sam X. Abarbanel, 92, who wrote the screenplay and produced the 1950s’ Prehistoric Women, died in Los Angeles in a freak accident. More.

Nicholas Webster, 94, an award-winning TV documentary writer-producer-director died in Santa Monica. His 1978 documentary Manbeast: Myth or Monster dealt with Yeti, Bigfoot, and the Honey Island Swamp Monster (not to be confused with Man Beast, the earlier drive-in movie, whose poster is pictured.) More.

Star C. Sams, 37, the co-host of the 2005 Sasquatch Research Conference and wife of Bigfoot researcher Jason Valenti, died in a car crash in Washington State. More.

Steve Irwin, 44, The Crocodile Hunter, who once devoted time in the hunt for the Thylacine, died in a freak accident involving a stringray off the Great Barrier Reef, Australia.. More here, here, here, and here. 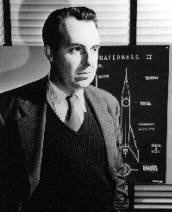 Nigel Kneale, 84, the screenwriter who adapted his own BBC serial "The Creature" for Hammer Films as The Abominable Snowman (1957), died in the U.K. More.

Mark K. Bayless, 46, a herpetoculturist, a moderator of a Bigfoot group list, and an active cryptozoology correspondent, died in Berkeley, California. More.

"Leadership is like the Abominable Snowman. You never see it, but you know by the footprints that it’s there." – Ann Richards, first woman elected governor of Texas (1991-1995), who died September 13, 2006.