You are here: Home / New Owl Discovered in Oman, Apparently

The BBC News is reporting that new sound recordings of an owl in Oman may be a record of a new species, as published in Dutch Birding from a random recent discovery. Most are hearing the news today.

Ornithologists working in Oman say an owl discovered in a remote, mountainous region could be a new species.

Wildlife sound-recordist Magnus Robb told BBC News that he heard the bird’s call whilst trying to record the call of another type of owl.

After repeated trips to the remote site, he and a colleague – naturalist and photographer Arnoud van den Berg – captured photographs of the bird.

Robb’s first recordings of the bird’s unfamiliar hoot were a “serendipitous discovery” in March 2013.

“I was listening through my headphones, when I suddenly heard something completely different [to the owl species I was there to record],” he told BBC News.

“I know the other Arabian owl sounds quite well, and this was clearly something that didn’t fit.”

The bird call expert said he had a “good inkling straight away that this could be something new”.

“I even phoned a colleague a few minutes later and said, ‘I think I’ve just discovered a new species of owl.”

The sound of the owl can be found here. The BBC also linked to the recording. 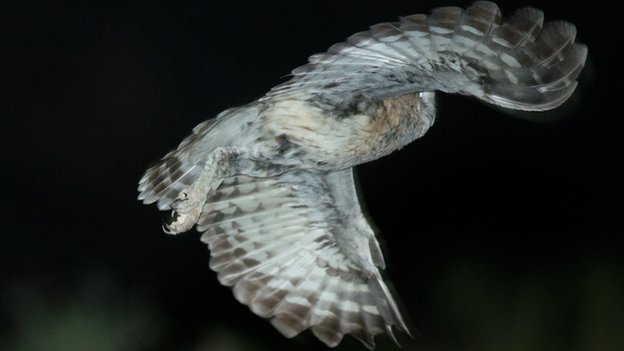 Dr Wesley Hochachka from Cornell University’s lab of ornithology commented that, in the last few decades, it had become “more accepted by ornithologists, particularly in tropical areas, that new species are being discovered based on distinctively different vocalisations”.

The team plans to gather DNA evidence from the owl’s feathers in order to confirm their find genetically.

But Prof Ian Newton, a bird expert from the UK’s Centre for Ecology and Hydrology, said he found the evidence that the team had already provided convincing.

“Based on the recordings of songs and calls and on the good-quality photographs, I was also convinced that it should be placed within the genus Strix, which also contains the Tawny Owl of Britain and Europe,” he told BBC News.

Mr Robb said he hoped eventually to name the new species the Omani owl, in honour of the Omani people.