You are here: Home / Type-D Orca: A New Species of Killer Whale?

The cetaceans are among the group of animals producing the most new species to Western zoology. A literal explosion of findings are providing routine news about new whales, killer whales, dolphins, and beaked whales. Recent discussions have occurred related to a new killer whale. 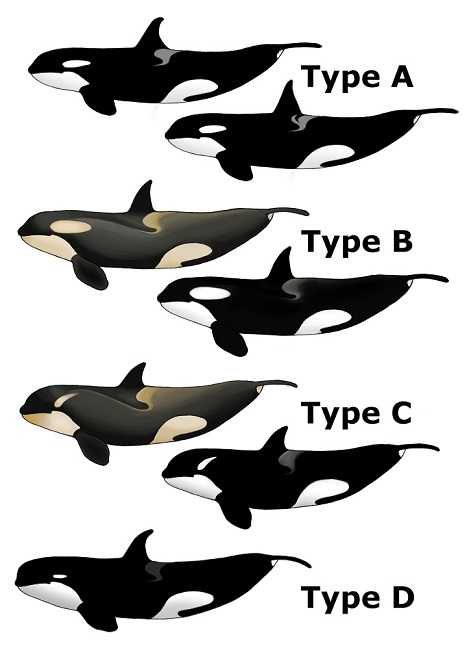 For a little background on the breaking news, here are details on the types of Orcas or Killer Whales:

The three to five types of killer whales may be distinct enough to be considered different races, subspecies, or possibly even species. The IUCN reported in 2008, “The taxonomy of this genus is clearly in need of review, and it is likely that O. orca will be split into a number of different species or at least subspecies over the next few years.” In the 1970s and 1980s, research off the west coast of Canada and the United States identified the following three types: 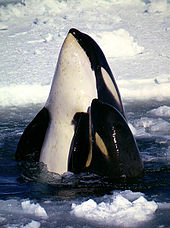 Transients and residents live in the same areas, but avoid each other. The name “transient” originated from the belief that these killer whales were outcasts from larger resident pods. Researchers later discovered transients are not born into resident pods or vice versa. The evolutionary split between the two groups is believed to have begun two million years ago. Genetic data indicate the types have not interbred for up to 10,000 years.

Three types have been documented in the Antarctic. Two dwarf species, named Orcinus nanus and Orcinus glacialis, were described during the 1980s by Soviet researchers, but most cetacean researchers are skeptical about their status, and linking these directly to the types described below is difficult. 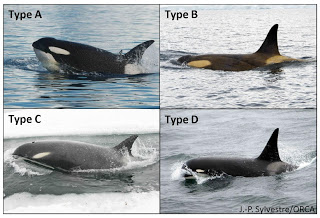 As for the new species news:

The Type-D killer whale, a type of orca generally thought to have its distinct look because of a rare genetic mutation, may actually be an entirely separate species of the cetacean, according to a recent study published in the journal Polar Biology.

Type-D orcas, known to live in the Southern Ocean, are set apart from their Type-A, B and C peers by their notably small white eye patch, bulbous head and shorter-than-normal dorsal fin. Other types of orca have much larger white eye patches and streamlined bodies. The first known observation of a Type-D orca was in 1955 when a small pod of the creatures washed up on the shores of New Zealand. Since then, there have only been a handful of at-sea sightings of a Type-D orca.