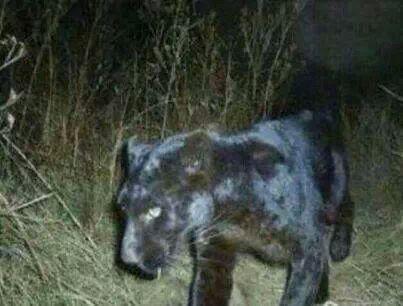 The above is a “new” photograph that has been sent to me today (August 6, 2014) allegedly showing “a black panther taken by a trail camera near Dale, Indiana.”

However, there is no claim or vouching for the “authenticity” of the location of the photograph.

It is one of those incidents of “It was sent to me by text by someone who knows the owner of the camera!”

But this is a recently old “Mystery Cat” hoax.

Dale A. Drinnon posted the following, with this same photo, on November 8, 2013:

Rare Panther Sighting
Photo taken by a trail cam of a co worker near Roan Mountain, Tennessee (Carter County). Truly a rare sighting. Most people around here have only heard stories of these cats.

(posted to Carolyn Rose Goyda’s Facebook wall this morning )
This seems to be a photo taken off the internet and originally indicated as a captive big cat from another location. As such its misrepresentation as coming from Tennessee constitutes a malicious hoax.

Further comments indicate this is a captive black leopard in South Africa, named “Cole.” Here’s the same pic from March 2013.

This image has been used to claim trailcam photos for Cole has been “spotted” in:
Louisiana,
South Carolina, and
Texas.

By making this American, the uniqueness of this trailcam photo from Africa has been undermined. This is a well-traveled photo of a known felid named “Cole.” But the story of the photo was used to illustrate an African mystery. 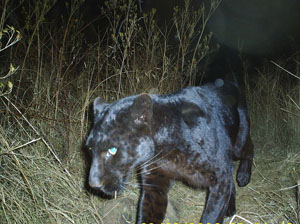 “Your chances of seeing a black leopard are less than one in a hundred, and considering how difficult it is to see the 99 normally coloured animals, it really is always mere coincidence. But that does not mean it doesn’t exist,”