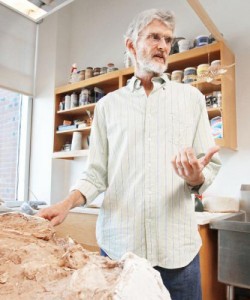 In an article on December 28, 2010, in the Oklahoman, James S. Tyree reveals a startling new discovery fifty years after it should have been made. 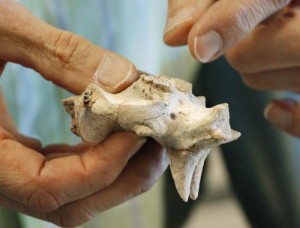 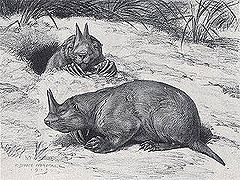 Staff at the Sam Noble Oklahoma Museum of Natural History are excited about the rediscovery of an ancient horned rodent that could turn out to be pure genus.

Remains of a rodent from the mylagaulidae family had been kept in an unmarked plaster-and-burlap “jacket” for 50 years at a Sam Noble museum storage area. Jackets contain sections of earth from archaeological digs.
Nick Czaplewski, the museum’s curator of vertebrate paleontology, said the animal doesn’t seem to fit with any ancient rodent species that had horns. The rodent’s teeth and lower jaw indicate it belonged to a genus and species in the mylagaulus rodent family that up until now was thought to have no horns.
“Well, it has horns for sure,” he said of the discovery, “and that makes it the third or fourth genus in the family that has side-by-side horns on its nose.”
Czaplewski said he and staff members Kyle Davies and Reg Tempelmeyer, are in the process of:

Finding out if the mylagaulus is part of some already-named species.
If not, then giving the rodent a name, describing it and explaining why and how it is different from previously known species.
Explaining how the rodent is related to other ones.
“This is the slow and tedious part,” Czaplewski said, “the reading of literature and taking all kinds of measurements.”
Until recently, the fossil’s origin at the museum had been as much a mystery as its origin in nature. Davies brought the unmarked jacket earlier this year from storage to the museum for volunteers and trainees to practice on, which is common.
But Czaplewski said the jacket turned out to contain much of a skeleton and even a skull. “Quite a prize as far as I’m concerned,” he said.
The problem was, the jacket had no location information.
The curator decided to contact David Kitts, the museum’s curator of vertebrate paleontology in the 1950s, to ask about the discovery, only to find the scientist had died Oct. 30.
So Davies brought over some other jackets that could have been associated with the mystery one, and Czaplewski found one that was similar to the one in question — a jacket taken from a western Oklahoma site dated Aug. 16, 1959.
“We found more coincidental evidence tying the jackets to one another and also a date from newspaper lining the plaster and burlap,” Czaplewski said. “I’m pretty confident we now know where the rodent skeleton came from.”

Once more is known about the rodent, Czaplewski plans to write and hopefully publish an article on what could be a newly discovered species, and “maybe dedicate the paper to David Kitts, about a half century after he or his helpers collected it.” Source.