You are here: Home / “Woolly Mammoth” Spotted in Siberia (Updated) 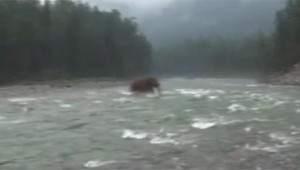 Wow, first this month has produced a video of a “River Monster” in an icy river in Iceland. Now, allegedly, a “Woolly Mammoth” has been filmed in a rough-looking river in Siberia.

According to the English tabloid source, The Sun, this footage was taken by “a government-employed engineer last summer in the Chukotka Autonomous Okrug region of Siberia.”

Before this “incident,” supposed sightings of living mammoths in Siberia were recorded as recently as the 1970s.

Could this be a replica (obviously with a movable trunk) in a creek? Or is this proof of a mammoth cryptid in Siberia? Or a brown bear with a salmon in its mouth (see at bottom)?

Below is an extremely tiny image of a brown bear with a salmon from here, demonstrating that if viewed smaller than we are all use to, a bear can look like a mammoth: