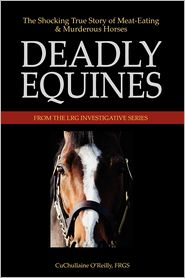 The author of the book has written directly to readers at Cryptomundo who commented on our first posting. Here is the response:

Let me begin by addressing the publication date.

In fact the book was not published on April 1st. It did not appear until several months later, as important last minute evidence delayed the release. This included discovering that in 1939 a German expedition to Tibet filmed horses being fed blood, evidence from the Lord Chamberlain of Bhutan that horses belonging to the king of country ate yak meat and tiger’s fat, and an offer by Kazakh tribesmen to sell a meat-eating horse to a modern explorer. So whereas it would be fun to think that Flicka had pulled an April’s Fool joke on the staid horse world, the truth is a bit less exciting.

“This makes me think of the Greek myth of the Mares of Diomedes..”

That is an excellent point! The Mares of Diomedes are indeed explained in the book. Like the other examples of dangerous equines, they demonstrate that our forefathers were keenly aware of the fact that equines could chose to enact the most incredible acts of savegery. For example, the Man Eater of Lucknow terrorized and killed the citizens of that city. While the French mare, Lisette, ripped the face off one Russian soldier and disemboweled another. What the book explains is that it is only since the advent of the motorized age, that wide spread equestrian amnesia has largely erased knowledge of this part of the equine behaviour from our collective consciousness.

“Horses can be dangerous, but meat-eaters?”

When the book was published the known list of meat which horses had known to have consumed included: Antelope, Beef, Birds, Chicken, Fish, Goat, Hamster, Horse, Human, Moose, Offal, Onager, Polar Bear, Rabbits, Seal, Sheep, Whale,Yak. Since then the list has grown. And we have just been informed of a horseman who a few hours ago offered his horse half a kilo of raw ground mince. The horse eagerly ate it. Thus evidence strongly suggests that horses are omnivores, not herbivores as is commonly taught today.

“…”this sounds very far-fetched and sensationalist to me.”

I was recently interviewed for an hour by Rick Lamb, host of America’s most respected equine radio show. He began by urging his listerners to “keep an open mind.” He concluded by stating that the evidence “recants our modern definition of horses.” Thus there was no need for sensationalism, nor would I engage in such a tactic. In fact, as I explain in the beginning of the book, it was only because of evidence linked to children’s deaths that I reluctantly decided to go public with the research.

“Alexander the Great had a horse that was known to be a killer..”

The book explains how one version of the legend has been largely suppressed because it depicts Bucephelus as being an eager man-eater.

The book explains how various cultures fed meat to horses so as to make them more powerful. Nineteenth century European explorers crossing Tibet rode equines who were “eager meat eaters.”

Nor should I neglect to mention that when humans and horses had to travel together across hostile, grass free environments, men learned that horses could survive on meat. One of the most astonishing examples was when the British army created a special meat ration, which Sir Ernest Shackleton fed to his horses while trying to reach the South Pole in 1911.

““Shakespeare, Sherlock Holmes and Steve McQueen … provide ….evidence”. Intereting line-up, and last time I checked, one of them was a fictional character..”

These people/characters were mentioned so as to demonstrate how previous generations of writers knew about the existence of savage, meat eating horses. I didn’t mention Kafka, but he too wrote about them.

“the horse in that paddock would aggressively follow my truck as I drove past with his ears pinned back..”

A similar story has been sent to the Long Riders’ Guild from New Zealand. And that illustrates an important point about this ongoing investigation. Unsolicitated evidence continues to arrive from all quarters of the world. And one story links to an similar episode thousands of miles away.

What has surprised us since the book’s release is the unexpected and uninterrupted stream of unsolicited evidence which has been sent to the Guild from riders around the world.

For example, in the last 72 hours we have received news about horses in Arabia who consume raw camel meat, horses in Louisiana who devour live crayfish, the BBC filmed horses eating fish on the beach of an English island, and Mariwari horses in India enjoy consuming goat’s head soup.

And the idea that horses are prey animals, who fear conflict, flee from man and are terrified of carnivores is also in need of immediate re-evaluation.

The “Deadly Equines” book was only a couple of hours old when the Guild received the first powerful positive evidence. The British Long Rider, Penny Turner, forwarded film footage of a Indian horse turning on its attacker and attempting to grab him by the throat.

Then soon after the book’s release, we learned of a seven-year-old New Zealand girl who was seized by the throat and thrown violently through the air. She survived, as did the American horse trainer visiting Egypt, where a horse tried to tear out his throat. A lady in Holland was not so lucky, as the horse ripped open her jugular. Yet the most disturbing case occurred in Oklahoma, where a four-year-old child was playing in his family’s front yard. The horse jumped a fence, and having missed the child’s throat, tore off his right arm and killed him in front of his horrified parents.

Therefore, the idea that horses are prey animals, who fear conflict, flee from man and are terrified of carnivores is also in need of immediate re-evaluation.

When Jane Goodall announced in 1961 that chimps ate meat, that discovery did not impact many people’s daily lives. However, I am sure you can appreciate the significance of the discovery that horses are omnivores who are capable of perpetrating acts of incredible violence.

There is a great deal of additional evidence and information available on the Deadly Equines page at the Long Riders’ Guild Academic Foundation website.

In the meantime, I will be happy to answer any questions regarding the project and its findings.CuChullaine