You are here: Home / Hurricanes, Cryptozoology, and Weird Animal News

Hurricanes hitting North America have interacted with cryptozoology in the past. What stories will we read about after the passage of Irene? 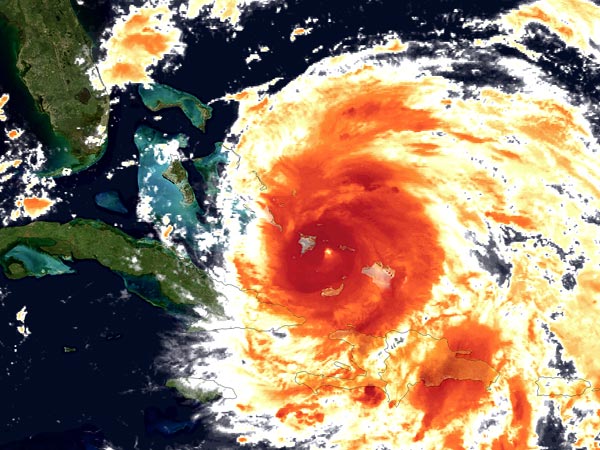 Sometimes you hear that all the reports of apelike creatures in the southern USA, in the bottomland swamps, have been blamed on this hurricane or that hurricane causing the escape of monkeys or apes from experimental labs, roadside zoos, or personal collections. However, most of these rural legends live in the same corner of the room where you find those tales of all the mystery cats being escapees from “circus train wrecks.”

Nevertheless, infrequently, big cats are said to have been a post-hurricane problem. And apparently, in a few rare cases, primates do wander about due to hurricanes. Let’s look at the facts.

Certainly hurricanes are known for their ability to completely wipe out populations. The imported Greater bird of paradise (Paradisaea apoda), which lived on Little Tobago in the Caribbean from 1909 to 1963, disappeared when it failed to survive Hurricane Flora.

Hurricanes have caused other ripple effects within the animal world that call for our attention. For example, it is known that feral pet monkeys have formed breeding colonies, especially in Florida, and infrequently in Texas. It is always good to keep track of these groups for some humans might report these animals as a random “Skunk Ape” or “Bigfoot.” It is best to know where these escapees might be living.

Rarely hurricanes are responsible for these specimens. A few of the 500 monkeys uncaged in 1992 by Hurricane Andrew from research labs, private owners, and the Miami Metrozoo are said to probably still be living and breeding in the Everglades.

Then there’s that business about a hurricane and Mothman sightings.

In the movie The Mothman Prophecies, news articles about the “Houston Batman” were flashed on the screen as the character “Alexander Leek” (“Keel” backwards) talked of how Mothmen were seen before disasters like “the hurricane” of 1969 in Galveston. But this is poor mythmaking that is pure cryptofiction time-traveling. The famed big hurricanes in Galveston occurred in 1900 and 1915, long before the Houston Batman was seen in 1953. No, Mothman was not seen directly before the Galveston hurricane of 1969.

But Galveston has been in the news with other strange hurricane-animal-related results. In September 2008, Galveston, Texas authorities busy trying to clean up after Hurricane Ike had a new problem on their hands: There was a tiger loose. A county official told the Associated Press on September 16, that the animal somehow left its enclosure at an exotic pets center in Crystal Beach. Animal experts are coming in to try and catch the tiger.

Galveston County Judge Jim Yarbrough put it this way: “Turns out there’s a tiger, and I understand he’s hungry … so we’re staying away from him.”

Crystal Beach is on Bolivar Peninsula. The area was one of the hardest-hit by Ike.

The news followed reports in 2008 of a lion holed up in a Baptist church with its owner on Bolivar Peninsula as well as livestock and other animals roaming amid Hurricane Ike’s wreckage.

No further accounts surfaced about the eventual status of these felids. Were they caught?

In 2008, there were no reports of any primate escapees, which often are rumored to have occurred when hurricanes sweep through the southern USA and subtropical Florida.

One thing is for certain. Hurricane Irene probably will cause a decrease in any possibilities of Sea Serpent sightings. On Saturday, September 5, 2009, when I gave two separate talks on the Sea Serpent & Whale Watch put on by the Bar Harbor Whale Watch company, the boat’s two trips had to go far out to see anything. Because of the then two recent coastal 2009 hurricanes (Bill and Danny), the local whales had been pushed out greater distances than usual to sea. Thus both treks went over fifty miles northeast (“downeast,” it’s called around here), up into the Bay of Fundy, beyond Eastport, Maine. We could easily see Nova Scotia from the boat.

We finally saw basking sharks (even one breaching) and whales, but no sea serpents. Meanwhile, Cryptomundian Bill Edmondson (below) went undercover with my Cryptomundo hat.

Will Hurricane Irene have an impact on cryptozoology? Only time will tell.

Research questions remain on this topic. I hope someday some statistically-minded investigators charts all the sightings of Sea Serpents along the East Coast and plots them in relationship to the past appearances of significant hurricanes. The results could be extremely revealing and enlightening.

The International Cryptozoology Museum is closed on Sunday due to Irene, unfortunately, at a critical time in our attempt to gather funds for our upcoming move to a much larger space. Special news bulletin: The museum has filed for tax-exempt nonprofit status, and any donations you give in support of the museum is now a tax-deduction for Tax Year 2011. Our development has been made possible by your donations, and you are to be appreciated for that. Your continued support is important to assist us in this next grand phase of our development.