You are here: Home / A Green Anaconda in Lake Hopatcong?

A Green Anaconda in Lake Hopatcong?

There’s a “monster” in New Jersey’s Lake Hopatcong, and reporter Michael Izzo has the latest on it in the Daily Record. The article’s headline sums it up: “Expert: Lake Hopatcong Boa Is Green Anaconda.” 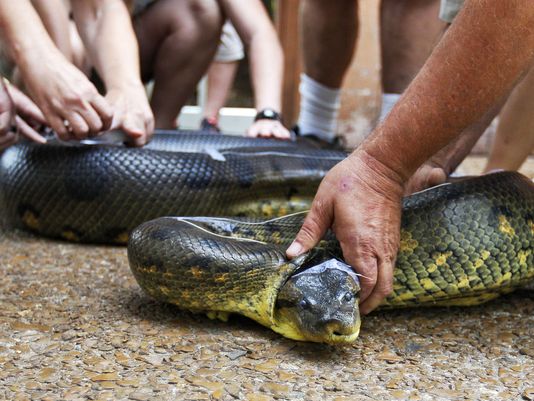 In this file photo, an anaconda snake at the Oklahoma City Zoo has dental floss taped to it’s head and along it’s body as it is measured. The floss and tape are necessary because it would be nearly impossible to stretch out the snake. This anaconda weighed 152 lbs. and measured 16 feet. An expert says the snake that he saw in Lake Hopatcong was an anaconda. Source.

Izzo also wrote of the long history of “Lake Monsters” in Lake Hopatcong, specifically of the creature called “Hoppie.” 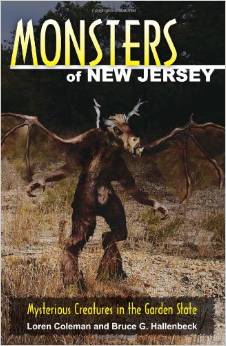 “Hoppie has been discussed for more than a century since, most recently in Weird NJ magazines and the book Monsters of New Jersey written by Loren Coleman and Bruce G. Hallenbeck, noted Izzo here. 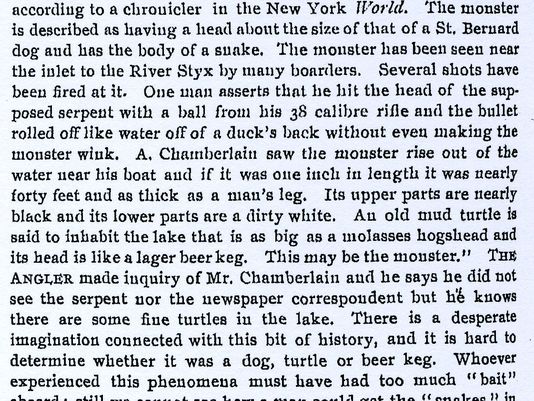 HOPATCONG – The Lake Hopatcong boa constrictor who has been reportedly seen in the Capp Cove section of the lake during the past two weeks is a green anaconda – the world’s largest snake – according to the expert who saw it.

“It’s a green anaconda. I have 20-plus years of experience, I know one when I see one,” said Gerald Andrejcak, a reptile specialist who works for Common Sense for Animals nonprofit in Warren County. “I saw the head, the spot pattern, the coloration. I saw the snake.”

Andrejcak said he was coming back from searching Halsey Island Thursday, scanning the bank when he passed a boat house and saw something out of the corner of his eye.

“I got closer and I saw a head laying on a vegetation bed,” Andrejcak said. “There was about two feet of the body sitting on a kelp bed, probably getting air.”

As Andrejcak approached the boat house, about eight to ten “spectator boats” produced waves that knocked his boat into the boat house door.

“The snake looked over, and I jumped out of my boat to grab it, but it went underwater,” Andrejcak said. “I was feeling around with my feet for it and I felt it swim right between my legs.”

Andrejcak admits feeling around for a boa constrictor is potentially very dangerous.

“But I know what I’m doing,” he said. “I know all the variants. Better me than someone who doesn’t know what to do.”

As of now, Andrejcak said the snake is not aggressive, because it swam through his legs instead of grabbing him.

By looking at the head size, Andrejcak estimated the snake is 14 to 16 feet in length.

Andrejcak said he’s been following the story since initial reports and even before he saw it, the locations where it was seen indicated to him it was likely an anaconda.

When Andrejcak told Jefferson Township Animal Control his thoughts, he was asked to simply say it was a boa constrictor to not cause a panic in the community.

An anaconda is a member of the boa constrictor family.

“I was asked not to release that,” Andrejcak said. “I understand why they asked that. I’m not saying I agreed with it.”

Calls to animal control this week have not been returned.

Andrejcak is now going public because the homeowner of the boat house where the snake was found was worried for his family’s safety.

“When he found out I didn’t catch it he was distraught,” Andrejcak said. “He has young kids he’s worried about.”

Andrejcak said it was the homeowner’s decision to release the fact that the snake was an anaconda, and he did so in order to draw a larger response to the situation.

Now that the word is out that the snake is an anaconda, Andrejcak expects even more attention, which may force it to move from its current location.

“If you put a lot of boats in the area, it’s going to want to go somewhere quieter,” Andrejcak said, adding he is hopeful the matter can be resolved without the snake dying. “I don’t want to see it get hurt, but I also don’t want to see any people get hurt.” Source.