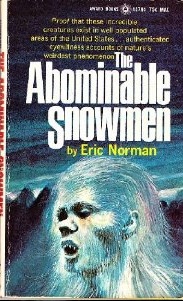 Today is the day to talk about “Eric Norman,” the author of the 1969 paperback The Abominable Snowmen. 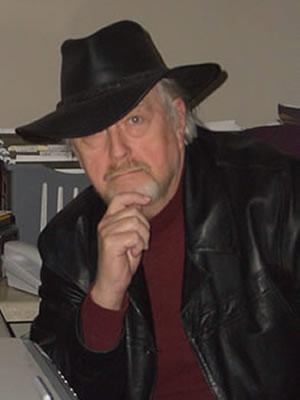 This Sunday is the birthday of Brad Steiger, the famous author of many books on cryptozoology, Forteana, and the unexplained.

Brad was born Eugene Olson in Fort Dodge, Iowa, on February 19, 1936. In 2012, Brad is alive and well, living quietly and secretly in a hidden location in the Midwest, avoiding stalkers, people who misunderstand his books, and the frequent autograph hound. Well, I’m sort of kidding, but Brad’s fan base has expanded so much in recent years, he rarely makes public appearances and enjoys his calm life writing his next book or two.

Brad began his early adult life as a creative writing professor in Iowa. The stories I first heard about Brad, who has been a friend of mine for decades now, was of this mild-mannered professor who would run upstairs to his near-attic-like office, and pound out books at an incredible rate to support his family.

Brad’s life continued along a path that would merge his writing with a pen-name that became his own (he has officially changed his name). He found the time and space to allow himself the freedom to leave his former restrained framework behind him, and he shares his life today with his beloved Sherry (shown below). 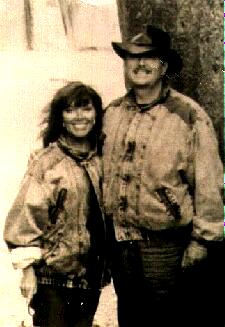 Brad has written books since 1965, and his total output is at about 170 books, with over 17 million copies in print, until his next one appears.

Some of Brad Steiger’s books clearly show that his beginning interests overlapped with where the assignments in publishing wanted him to go, through some Hollywood connections. For example, his book Valentino (first edition, 1966) served as the basis for the 1977 motion picture, Valentino, directed by Ken Russell and starring Rudolf Nureyev, Michelle Phillips, and Leslie Caron. Steiger’s book, Unknown Powers (New York: Berkley, 1981) was adapted into the documentary scripted by Don Como, Richard Cory, and Steiger. The nonfiction movie won the Film Advisory Board’s Award of Excellence for 1979. The film featured Jack Palance as narrator with Will Geer, Roscoe Lee Browne, and Samantha Eggar.

Here’s a partial list of books that Steiger has authored or co-authored of special or near interest to most of us here:

Monsters Among Us. Rockport, MA: Para Research, 1982. New York: Berkley, 1989. Lakeville, MN: Galde Press, 2006. This is Brad’s most comprehensive cryptozoological book. His chapter on Momo is unique. His contributions added new details on the sightings of this now famous 1972 Missouri “Eastern Bigfoot” or “Marked Hominid.”

Out of the Dark: A Complete Guide to Beings from Beyond. New York: Kensington, 2001.

The Gale Encyclopedia of the Unusual and the Unexplained. Three Volumes. Farmington Hills, MI: The Gale Group, 2003. 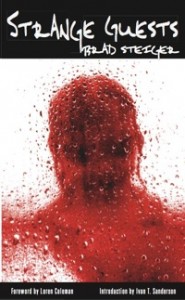 A few years ago, to deal with the long term rumor that Brad Steiger was a pen name for “Warren Smith,” I interviewed Brad and wrote about how the real Warren Smith (Warren William Billy Smith, 1931–2003, also from Iowa) and Brad created the pseudonym of Eric Norman.  Warren Smith infamously known for the 1970 book, Strange Abominable Snowmen, which is partially fictionalized, was an old friend of Brad’s. Together, Brad and Warren co-wrote various books: The Under People (NY: Lancer Books, 1969); Gods, Demons & UFOs (NY: Lancer Books, 1970); Gods and Devils from Outer Space (NY: Lancer books, 1973).

Of course, the use of names in the game of authors’ pseudonyms sometimes does takes strange twists. In 1969, Brad Steiger employed the name “Eric Norman” as his own, writing The Abominable Snowmen (NY: Award Books, 1969).