You are here: Home / Author of Dr. Who's "The Abominable Snowmen" Dies

Author of Dr. Who's "The Abominable Snowmen" Dies

Amongst his credits were episodes of “Doctor Who,” “The Onedin Line” and “Howard’s Way.” Together with Henry Lincoln (who would go on to become famous for Holy Blood, Holy Grail), Haisman penned three “Doctor Who” stories in the late 1960s during Patrick Troughton’s tenure as the Time Lord. His first story with Lincoln was “The Abominable Snowmen,” which introduced the Yeti and together the two penned the sequel, “The Web of Fear” soon after. The “Web of Fear” is notable for introducing the character of Alistair Gordon Lethbridge-Stewart (Nicholas Courtney) who would become a fan favorite simply referred to as The Brigadier. The final story he penned was “The Dominators.”

It should also be noted that writer “Norman Ashby” for “Dr. Who” was a pseudonym for Mervyn Haisman and Henry Lincoln.

Aside from “Doctor Who,” Haisman’s other writing credits include “Sutherland’s Law,” “Jubilee,” the period drama “The Onedin Line,” and in the late 1980s the BBC soap “Howard’s Way.” Haisman’s work on “Howard’s Way” began from season four, writing 12 episodes in all. 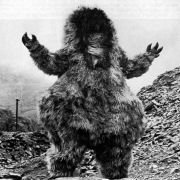 “The Abominable Snowmen” is a serial in the British science fiction television series Doctor Who, which originally aired in six weekly parts from September 30 to November 4, 1967. The story is notable for the introduction of recurring foes, the Yeti.

Episode one, for example, begins with Professor Travers, an anthropologist and explorer, being awaken from his sleep when he hears the screams of his companion. He is horrified to see a lumbering, hairy creature standing over his friend’s lifeless body. The beast grabs Travers’s gun and twists it into scrap metal as the terrified man scampers into the night. (For an extensive summary of the series, please see here.)

Yeti from “The Web of Fear.”

The Abominable Snowmen proved to be very popular with viewers, which pleased the producers enough that they brought the monsters back very quickly in “The Web of Fear,” and intending a third story in the next season until falling out with the production over “The Dominators.” This was partly an effort to provide a new ‘signature enemy’ for the series to replace the Daleks. At the time of production, Dalek creator Terry Nation was trying to create an American television show based around the Daleks, and as a result refused to grant the show permission to use the Daleks during this period. The Yeti would appear once more in “The Five Doctors.”

“The Abominable Snowmen” on “Doctor Who” employed the North Wales mountain pass at Nant Ffrancon as Tibet for the filming of this serial.

The creations of Haisman and Lincoln were extended into print due to their popularity.