You are here: Home / The Bluff Creek Massacre Hoax Revisited 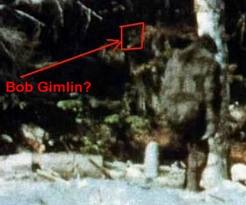 One of the silliest slides produced and then withdrawn by M.K. Davis, Bob Gimlin is allegedly shown hiding in the Bluff Creek forest!! 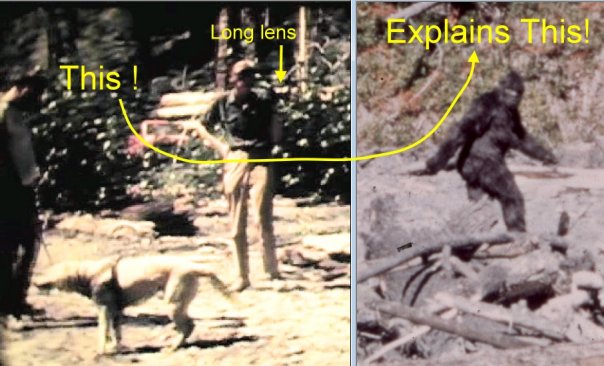 For anyone unfamiliar with the authentic reporting on the Patterson-Gimlin footage, please refer to Bigfoot: The True Story of Apes in America (Simon and Schuster, 2003).

In August 2009, to expose the unsupportable claims being sent around the Internet that John Green and Bob Titmus were involved in a coverup of the killing of Bigfoot at Bluff Creek in 1967, an introduction to the latest from M. K. Davis was posted here. It was demonstrated, for starters, that John Green, shown above in one of Davis’ “yellow lines & arrows” claims, was not carrying a movie camera, long lensed or otherwise.

Within hours, Davis had disabled his videos, and closed his YouTube account. As noted in the discussion at the time, this was the standard operating procedure for Davis when confronted with questions and concerns about what he allegedly saw in the Patterson-Gimlin film and other footages. He stayed low until he felt the heat was off, slowly engaged people with his “new discoveries,” and then began giving slide shows, sharing YouTube videos and other so-called “evidence” with a chosen few, who then pass it on to more people. This happened throughout 2007-2009.

These scenarios became a concern within the Bigfoot community, because Davis’ past “film stabilization” reputation carried him along, often without questions. People who have not fully investigated or even observed what Davis was conceptualizing claiming, would say “Maybe he’s got something.” Whispers began, and rumors circulated.

When Davis was told the sources of his “vision” were based on false realities, he merely moved on to other people and “new” items he saw in the films.

For example, efforts in 2008-2009 to inform Davis of the proper origins and facts behind the films that John Green and Rene Dahinden used on their speaking tours in the late 1960s/early 1970s, were merely ignored by Davis. Instead, the analyses of these films by Davis and his associates were circulated and shown publicly calling into question Green’s, Dahinden’s, and Titmus’ reputations.

All images from M. K. Davis’ slide shows below have been shared here by the “accused,” to clear the record and, instead, to reveal the witch hunt of the “accusers.” 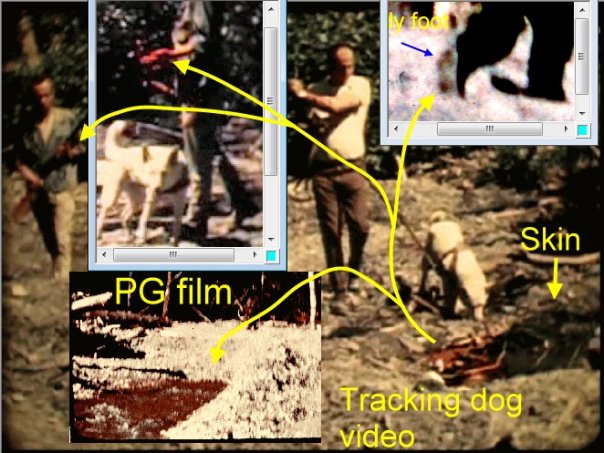 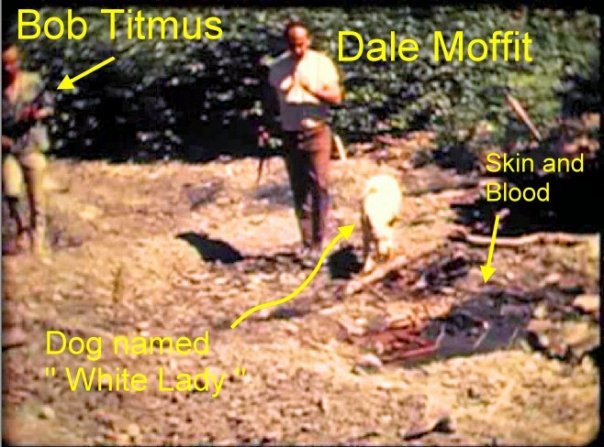 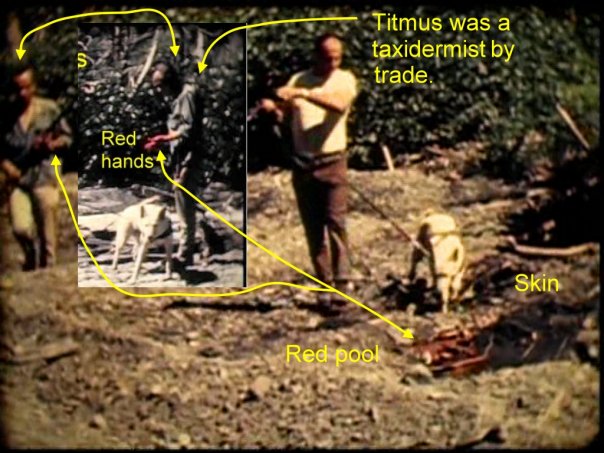 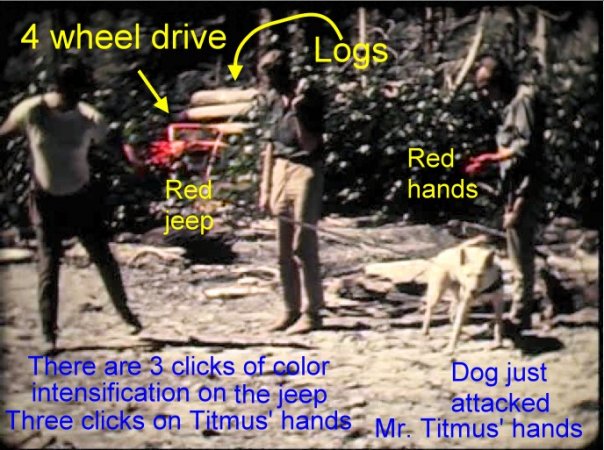 The man identified as Bob Titmus is not him, but presumably is the pilot of our chartered aeroplane, who didn’t want to sit around in Orleans with nothing to do and joined up as one of the two people carrying rifles that the dog owner insisted on. Titmus was then living on the British Columbia coast, either at Klemtu or Kitimat, and was not in touch with what was going on. ~ John Green, August 24, 2009.

On Facebook, [Davis] tells how he manipulated Rene’s film by intensifying the red element in specific spots. I don’t do that sort of stuff, but I would expect that would make anything brown, orange or purple appear to be red. ~ John Green, August 24, 2009.

The owner [of the dogs] had been along on the first trip and had seen the tracks at Onion Mountain. That is why he insisted on protection for his dog before allowing it to be used to follow such tracks. ~ John Green, August 18, 2009.

There is a good account of the occasion on which Rene’s film was made in the chapter “Blue Creek Mountain” in On the Track of the Sasquatch.

MK, who certainly does exist, and Dave Paulides’ “experts”, who perhaps don’t, were not finding things that don’t exist in the movie Roger Patterson took, they were finding them in a movie Rene Dahinden took, at a different place, with the leaves green instead of red, with different people in it, and with no relationship whatever to the Patterson movie.

I can’t understand how anyone could imagine that frames in which all the leaves were green were exposed at the same time of year as frames where all the deciduous leaves were red. I can see nothing similar about the two sites except that a large log appears in each, but at different elevations above the ground, which MK seems to consider evidence of the sandbar having been filled and compacted before Patterson took his movie, to cover up the buried sasquatches.

I can’t think up any time line that could make sense and haven’t encountered anyone else’s explanation of it. It appears that I am supposed to have heard of the massacre somehow and taken the tracking dog to try to find the site, then having found it having joined in the conspiracy to cover it up. That would get me there while there was still red blood all around, but would have to be after the actual shooting and before Patterson and Gimlin buried anything–but Patterson’s movie has to have been made after the burying to raise the level of the ground.

The more I try to explain the stranger it seems that anyone could think this stuff up, let alone actually go public with it, let alone have anyone else believe it. ~ John Green, August 24, 2009. 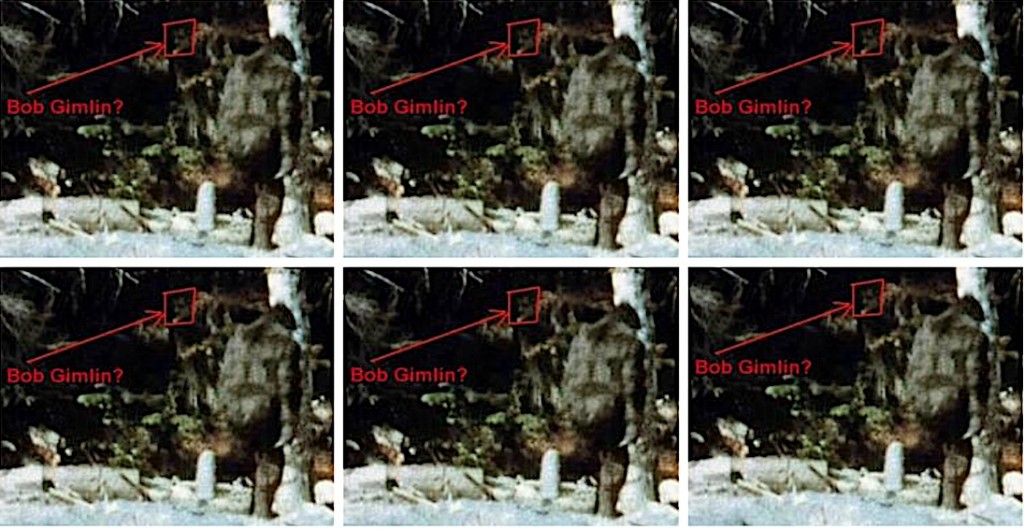