You are here: Home / Last Weekend: Monsters of Men

Before the next FIRST FRIDAY, come see the last weekend/last week of the showing of- “Monsters of Men” by Andy Finkle. 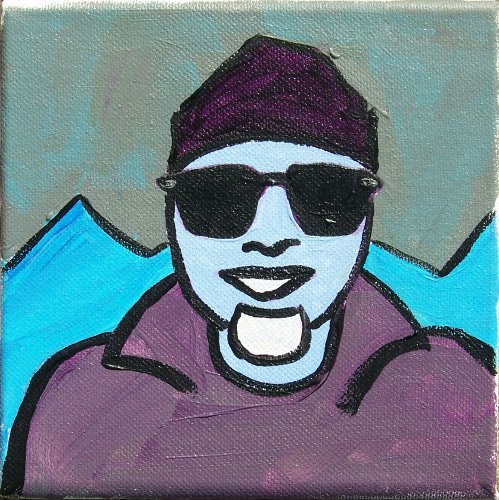 What a great opening! The Green Hand’s display of Andy Finkle’s art gives a glimpse into the humor and insights of this exciting observer of cryptozoology. Come by and see it at the Green Hand Books in Portland during September.

The International Cryptozoology Museum supports local and national artists, and its collection now contains the following pieces of Finkle art: the red Bigfoot, the Dover Demon, and individual portraits of Finding Bigfoot’s Cliff Barackman, the Bigfoot Discovery Center’s Mike Rugg, plus the ICM’s Loren Coleman. (For September, except for the red Bigfoot, these are all on display in his Green Hand show.)

Want your own Andy Finkle art?

Opening September 2, 2011, and continuing through the end of the month, at…

In his inaugural exhibition in Maine, Andy Finkle presents a series of monsters and the men that search for them. This acrylic bestiary presents interpretations of some of the most notable characters in Cryptozoology. From Bigfoot to the Owlman, these elusive subjects are available for public viewing in vivid full color.

Finkle’s work is influenced more by In Search Of reruns than college art courses. Inspired by comic books, Finkle treads the painterly line that separates the whimsical from the grotesque. His work has appeared in the only bowling alley in Antarctica and the most recent issue of Horror Hosts and Creature Features. While currently based out of South Carolina, Finkle is patiently plotting his next appearance in Maine.

The artist and the corner of one of his works. And more fully revealed, below.