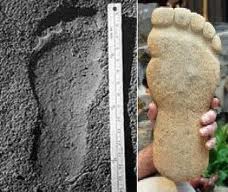 In the last installation of this series, I discussed cleansing the database of track photographs and casts. This especially is true for the hourglass variety tied to the Wallace hoaxes, as they are clogging the database. One of the best examples of how public this database is comes to us via the continued publication of mistakes and fakes in the Sasquatch and Bigfoot literature.

A survey of Bigfoot books from the 1960s to present demonstrates that they are filled with photographs of alleged Bigfoot tracks that appear to be made by Ray Wallace’s fakes, are questionable hourglass trackways, and/or are created fictions.

Let’s take some examples ripped from the early history of Sasquatch-Bigfoot’s beginnings, and look at how the information has been manipulated to fit the patterns that were being promoted.

First, let us start in non-Ray Wallace territory, with an example of a book myth that has continued into this century.

The tracing of the footprint left during the Ruby Creek Incident is fairly well-known to most who have studied the early days of Sasquatch investigations. 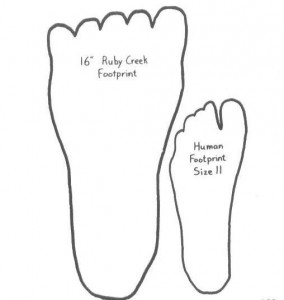 The Ruby Creek Incident occurred near the Fraser River in British Columbia on October 21, 1941. The family involved were the Chapmans. A tracing of the footprint found by US Deputy Sheriff Joe Dun, who did a private investigation, was saved, and then rediscovered by John Green during his 1957 re-interviewing of the Chapmans and others in the area. Green re-interviewed them in the late 1950s, and introduced them to Ivan T. Sanderson during his tour of the West in 1959. A month after the Sanderson interview, the Chapmans were dead, having drowned in the Fraser River.

The original of the Jerry Crew’s first Bigfoot cast of October 3, 1958, at Bluff Creek, California. 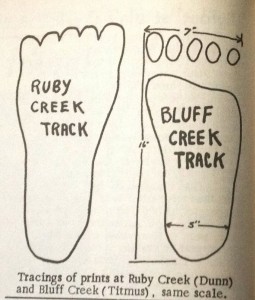 In John Green’s first book, the Ruby Creek Sasquatch track tracing was compared to the Bluff Creek track in a drawing submitted by Bob Titmus. 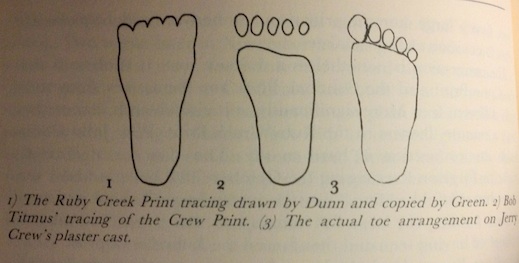 Above is a drawing of the Ruby Creek track, the Titmus view of the Bluff Creek print, compared to Gian J. Quasar’s drawing of how the Crew track should have been drawn. This is from Recasting Bigfoot, where Quasar shared his thoughts on the Ruby Creek-Bluff Creek drawings situation. 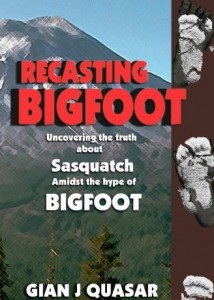 Gian Quasar addresses this issue directly in his book (quoted here, with permission):

Fifty-years of water has gone under the bridge, and I must critique this popular but terribly inaccurate and carnival episode in order to expose a false image. I cannot ignore the error for delicacy sake.
The initial excuse for John Green’s error can only go so far. And this must have been, to put it politely, that he must have deeply wanted to believe in Sasquatch and that Bluff Creek provided the only tangible evidence so far in his personal quest. This self-deception may have been short lived had Bob Titmus’s not come to play a very decisive part. Green had never seen a clear image of the Crew Print. He had only seen the picture in the Province. But Green had shown Titmus his tracing of the Ruby Creek Print. Soon after this, Titmus would give Green his tracing of the Crew Print for comparison.
To put it bluntly, Titmus’ illustration is phony. Its purpose seems to imitate the Ruby Creek Print and there with suggest a pattern. Yet instead of exposing Titmus’ blatant artistic fib, Green was wholeheartedly convinced it was genuine. Ten years later in his first book, On the Track of the Sasquatch, he used the comparison to anchor his equation of Bigfoot as Sasquatch. “What particularly impressed me,” wrote Green, “was the similarity between the outline of the tracks and the tracing I had of one of the Ruby Creek footprints. They did not diverge by more than half an inch at any point, and could easily have been made by the same individual.”

Such a phenomenal statement should have even make Ripley sit up and do a double take. There was, in fact, no resemblance other than the one Titmus wished to fabricate. And Green had more than 10 years to confirm or expose the accuracy of Titmus’ drawing. Many newspapers printed and reprinted the pictures of Crew holding his famous cast of the 16 inch Bigfoot foot. And, indeed, it appeared in many of Green’s various booklets/books, including recent reprints, and many pivotal documentaries thanks to Green’s assistance, the bogus comparison is promoted.
Moreover, Green’s deductions do not incorporate any explanation for those odd hourglass footprints, the only actual footprints he ever saw in situ. Yet they are the prints which had convinced him Bigfoot was real. (Recasting Bigfoot, p. 63-64) 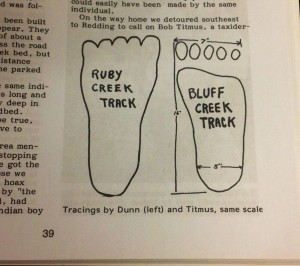 Above and below, two current drawings in the 2004 edition of The Best of Sasquatch Bigfoot by John Green, which continues the mythical comparison between the Ruby Creek track and the Bluff Creek ones. 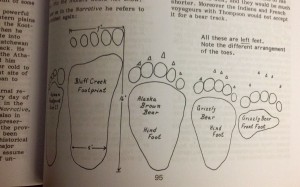 Mark A. Hall in his copyrighted 2003 article “The Real Bigfoot and Genuine Bigfoot Tracks” [December 2002 (Vol. 7 No. 4) pp. 99-125], addressed how the literature was filled with fake tracks of the Wallace second set (Hall classification). I quote, with permission, his extensive insights and add images to illustrate his examples. 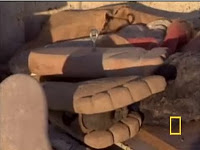 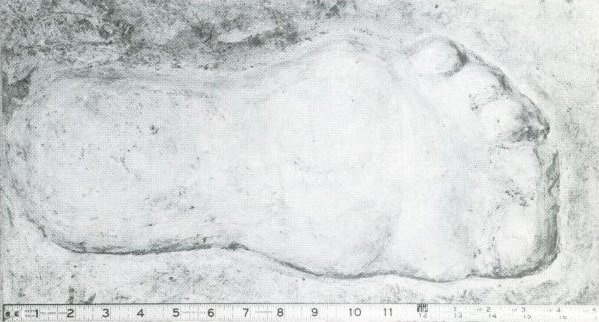 The one photograph of an Oh-Mah track in Ivan Sanderson’s Abominable Snowmen is one of these fakes. By the time Sanderson made a trip through the West in 1959 the fakes had been liberally deposited on sandbars in Bluff Creek. He used the imprint of one of those fakes as an illustration in his book. For years afterwards he displayed an imprinted mold made from it as the footprint of Bigfoot. [Ivan T. Sanderson, Abominable Snowmen: Legend Come To Life(Philadelphia: Chilton Books, 1961), plate.] 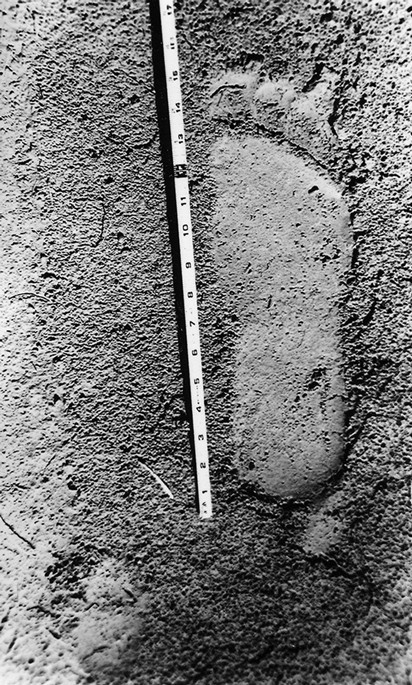 “The tracks left on Blue Creek Mountain [- Onion Mountain], California, in 1967 were a long trail from the second set,” writes Hall. 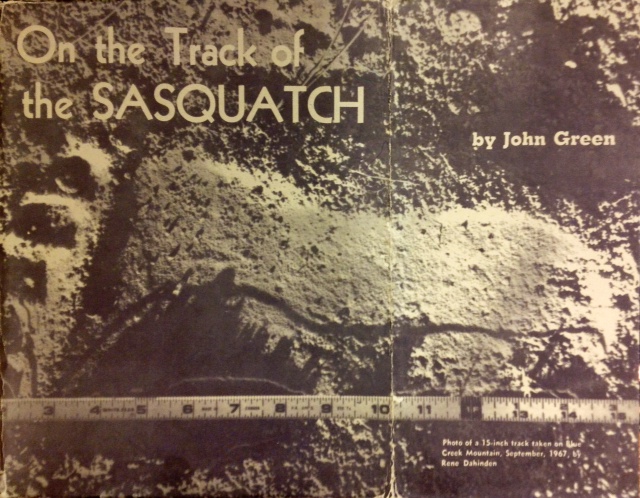 “They appeared in John Green’s books and were illustrated in many Bigfoot articles written by others,” continues Hall.

“Photographs of this fake appeared in books by John Napier and by Elwood Baumann, and in the one Rene Dahinden co-authored with Don Hunter,” notes Hall. 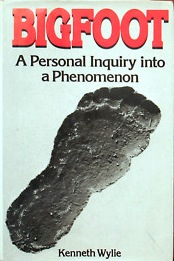 “The silhouette of the fake track adorned the dust jacket of Kenneth Wylie’s book Bigfoot – A Personal Inquiry.” [John Green’s On the Track of the Sasquatch, (Agassiz, BC: Cheam, 1969), ii, 45 and Sasquatch: Apes Among Us, 77; John Napier Bigfoot (NY: Dutton, 1973), plate 13; Elwood Baumann, Bigfoot, 2, 5; Hunter and Dahinden,Sasquatch, on the sixth page of plates; Kenneth Wylie, Bigfoot: A Personal Inquiry into a Phenomenon (NY: Viking, 1980).] 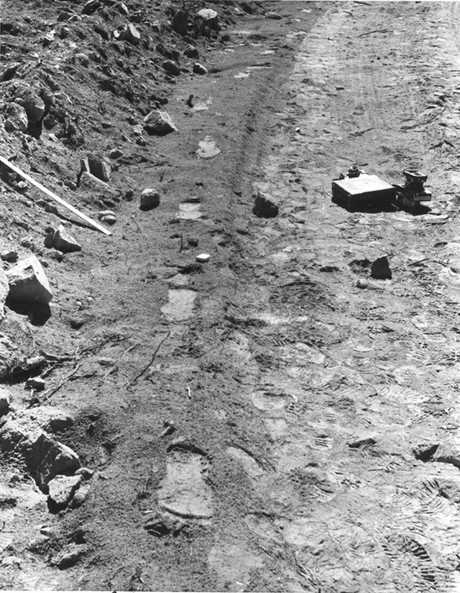 It is worthy of noting that John Green exposed the mistakes of Peter Byrne’s manipulation of this footprint photograph. See below: 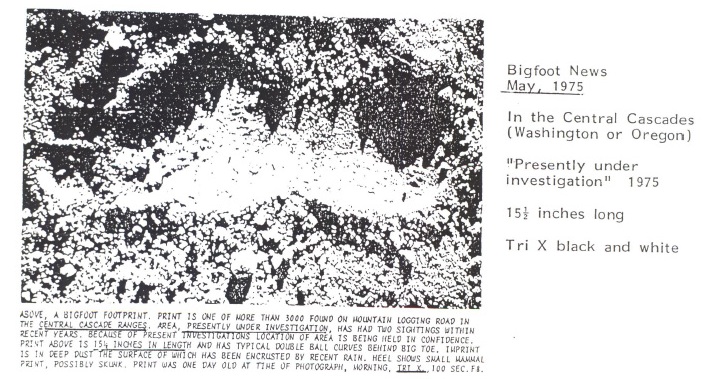 “I should note the significance of three books where these fake tracks did not appear. Roger Patterson did not put any image of them into his two books, the 169-page Do Abominable Snowmen of America Really Exist? published in 1966 and the 68-page Bigfoot – Volume 1 published in 1968. Grover Krantz likewise ignored these particular fakes when he wrote Big Footprints. The implication is that these two authors did not find them acceptable.

“The tracks became a part of Bigfoot history. A part that can now be recognized and removed from any serious consideration of the topic.

“Once mistaken for genuine Bigfoot tracks, there are two reasons why the fake footprints became so widely disseminated. There was money to be made by selling copies of casts and photographs. That began in the late 1950s as Bob Titmus offered copies of casts at $3.50 apiece. Others followed in later years. And readers about Bigfoot wanted to see what a track looked like for themselves. For that purpose the best images were, not surprisingly, the numerous fake images tramped out in controlled circumstances by people who wanted them to be seen and admired. It was done in places where poorly made fakes could be destroyed if they did not have the desired appearance.

“The tracks were recognized as fake as early as 1960. But that knowledge was not widely shared at the time.”

BTW, for those still confused by this entire story, the suggestion that these fakes were copies of real footprints found in 1958, is undermined by the history of who found those “first” hourglass tracks. It was Shorty Wallace, Ray Wallace’s brother, and the employees of Wallace who were specifically brought on to get more publicity for the Bigfoot track finds. While Jerry Crew had earlier discovered what many take to be real prints, soon the hourglass tracks matching the Wallace wooden fake tools are noted by the Bill Chambers’ reports (shown here).

Real footprints are out there. It is merely ashamed that we have to wade through so many fakes to find them, even in new books. 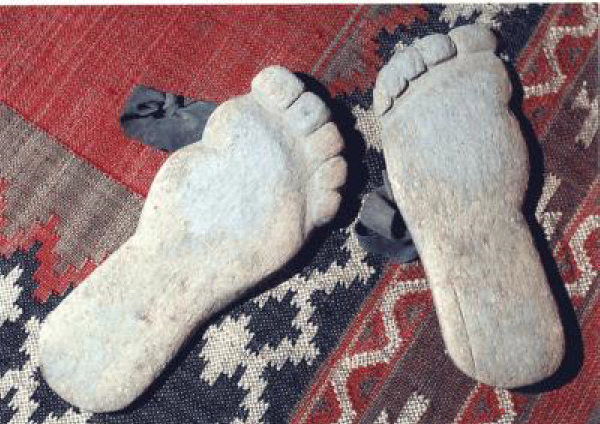 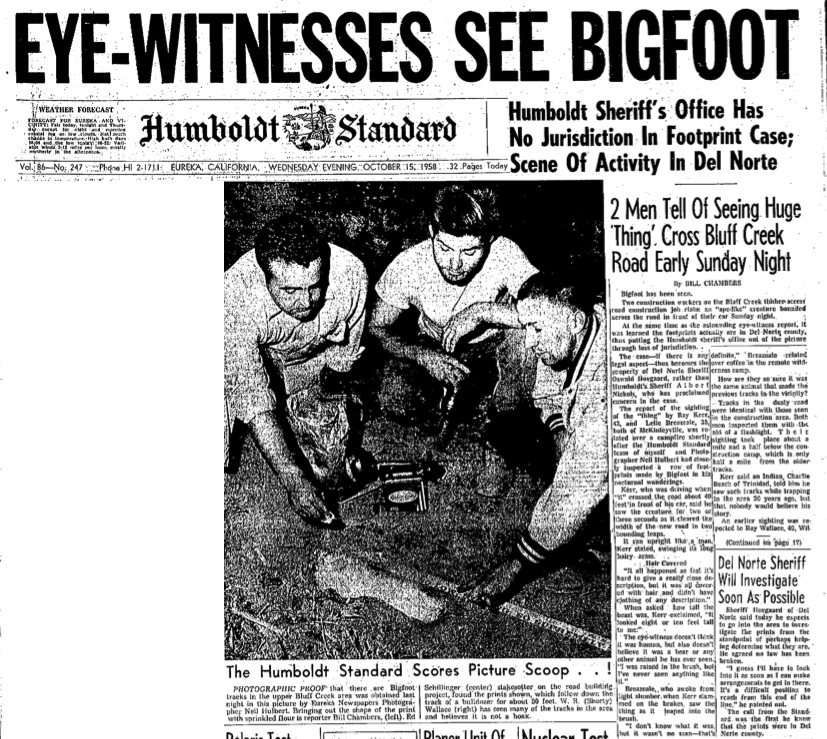 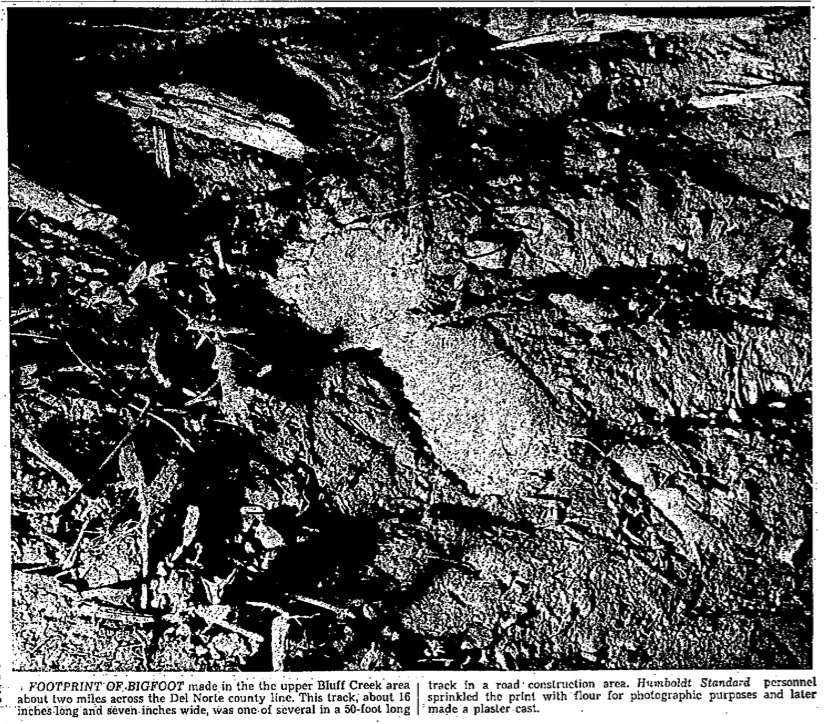 +++++++++++
The Fine Print
Some people are reprinting this entire blog.
That’s copyright infringement.
If you wish to note these writings, please ask for permission to briefly quote from the
essays and then link back to them, so a complete
understanding of the discussions will be intact. Thank you.
Photographs contained in this Bigfoot Cast Analysis Series are primarily
of casts within the collection of Loren Coleman. Other photographs of
casts and footprints are the result of direct permissions from Taylor Made,
Cliff Barackman, John Green, David Rubert, David Carkhuff, Ron Schaffner, and several other
researchers and associates. Portions of this blog’s content contains
materials that are reprinted under the Fair Use Doctrine of International
Copyright Law as educational material without benefit of financial gain.
This statement is applicable throughout the entire site.
by Loren Coleman on May 24, 2013 in Bigfoot, Books, Breaking News, CryptoZoo News, Footprint Evidence, Forensic Science, Hoaxes, Sasquatch, Skeptical Discussions | Tagged Bigfoot, Books, Fakes, Faux, Footprints, Hoaxes, Photographs, Sasquatch, Tracks