You are here: Home / Edward Cronin and the White-Eyed River Martin

Edward Cronin, as you may recall, was one of the leaders of the famed Arun Valley, Nepal expedition that found tracks of what was allegedly Yeti during their natural history survey there in 1972. I’ve discussed these recently here and here.

Besides adding to my collection of a few hundred field guides, I also wanted to sketch in a bit more about one of the people on that little-discussed expedition.

The “about the author” entry at the book’s end gives more background on what Cronin was doing before his Arun expedition. It relates that…

Edward W. Cronin, Jr. worked for the Association for the Conservation of Wildlife for two years while he was a U.S. Peace Corps Volunteer. He was involved in several projects of the Association, including research on endangered species and the production of this revision of Bird Guide of Thailand. Since leaving Thailand, Mr. Cronin has been co-leader of an expedition which is making an ecological survey of the Arun Valley of Nepal.

It is difficult to find photographs of what Cronin looked like during that time, almost as if he was a spy

The book also graphically shows Cronin’s and his coauthor’s interest in new species.

The back cover has a painting (above) by Boonsong Lekagul of the White-eyed River Martin (Pseudochelidon sirintarae) with a caption noting this bird “has only been reported from Thailand [and] was discovered by Kitti Thonglongya in 1968. He obtained nine specimens form villagers who had netted them at Borapet Reservoir in Nakhonsawan Province. Since that time we have received no new information about this species, and we still know nothing about its life history.”

More recent information on this bird is not too encouraging. The White-eyed River Martin (Pseudochelidon sirintarae, sometimes Eurochelidon sirintarae) is a passerine bird, one of only two members of the river martin subfamily of the swallow family Hirundinidae. It is known only from a single wintering site in Thailand, and may be extinct since it has not been seen since 1980.

As the Cronin book records, the White-eyed River Martin was discovered only as recently as 1968 by Thai ornithologist Kitti Thonglongya, who obtained nine specimens netted by professional bird-hunters as part of a migratory bird survey at a night-time roost at Thailand’s largest freshwater lake, Bueng Boraphet in Nakhon Sawan Province.

The White-eyed River Martin was then seen in Thailand in 1972, 1977 and 1980, but not definitely since, though there is an unconfirmed sighting from Thailand from 1986. It is classified as critically endangered, which is the highest risk category assigned by the International Union for the Conservation of Nature and Natural Resources (IUCN) for wild species. The designation means that a species’ numbers have decreased, or will decrease, by 80% within three generations. The IUCN does not consider a species extinct until extensive targeted surveys have been conducted, but the White-eyed River Martin may well no longer exist in the wild. 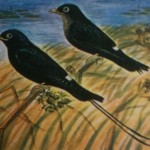