You are here: Home / Confirmed: Africa Has Two Elephant Species

The following announcement, of course, does not take into account the fact that there may be a third species of African elephant, the pygmy, but more of that at the end.

Contrary to the belief of many scientists (as well as many members of the public), new research confirms that Africa has two—not one—species of elephant. Scientists from Harvard Medical School, the University of Illinois, and the University of York in the United Kingdom used genetic analysis to prove that the African savanna elephant and the smaller African forest elephant have been largely separated for several million years.

The researchers, whose findings appear online in PLoS Biology, compared the DNA of modern elephants from Africa and Asia to DNA that they extracted from two extinct species: the woolly mammoth and the mastodon. Not only is this the first time that anyone has generated sequences for the mastodon nuclear genome, but it is also the first time that the Asian elephant, African forest elephant, African savanna elephant, the extinct woolly mammoth, and the extinct American mastodon have been looked at together.

“Experimentally, we had a major challenge to extract DNA sequences from two fossils—mammoths and mastodons—and line them up with DNA from modern elephants over hundreds of sections of the genome,” says research scientist Nadin Rohland of the Department of Genetics at Harvard Medical School.

Forest elephants (shown) in Africa have now been confirmed as a new species of elephant and have been distinguished from the larger savanna elephant in Africa.

According to David Reich, associate professor in the same department, “The surprising finding is that forest and savanna elephants from Africa—which some have argued are the same species—are as distinct from each other as Asian elephants and mammoths.”

Researchers only had DNA from a single elephant in each species, but had collected enough data from each genome to traverse millions of years of evolution to the time when elephants first diverged from each other.

“The divergence of the two species took place around the time of the divergence of the Asian elephant and woolly mammoths,” says Professor Michi Hofreiter, who specializes in the study of ancient DNA in the Department of Biology at York. “The split between African savanna and forest elephants is almost as old as the split between humans and chimpanzees. This result amazed us all.”

The possibility that the two might be separate species was first raised in 2001, but this is the most compelling scientific evidence so far that they are indeed distinct.

Africa’s savanna elephant (shown) is as different from Africa’s forest elephant as Asian elephants are to mammoths, says a new study in PLoS Biology.

“We now have to treat the forest and savanna elephants as two different units for conservation purposes,” says Alfred Roca, assistant professor in the Department of Animal Sciences at the University of Illinois. “Since 1950, all African elephants have been conserved as one species. Now that we know the forest and savanna elephants are two very distinctive animals, the forest elephant should become a bigger priority for conservation purposes.”

###
This research was funded by the Max Planck Society and by a Burroughs Wellcome Career Development Award in Biomedical Science.
###

Then there is the matter of Pygmy Elephants, which are today reported to be living in both Africa and Asia. 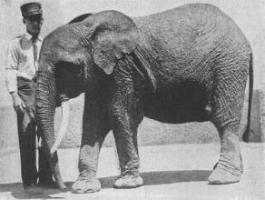 The controversial Pygmy Elephant (Loxodonta pumilio) of Africa has been confirmed by film/video footage and photographs of entire herds of the species as requested by its opponents. These individuals now say that it is an unknown behavior or morph of the forest elephant, thus, as expressed firmly in personal communication to me by Michel Raynal, this “demonstrates that no evidence will be accepted by these ultra-skeptics.”

The African Pygmy Elephant, described as Loxodonta pumilio, is currently considered to be a tiny morph of the African Forest Elephants (L. cyclotis); see Debruyne et al. (2003). But even the DNA studies are less than clear, and the groupings and photographs of the small elephants appear to confirm that the species is valid.

The Borneo Elephant (Elephas maximus borneensis) is also called a “Pygmy Elephant.” This elephant, inhabiting tropical rainforest in north Borneo (east Sabah and extreme north Kalimantan), was long thought to be identical to the Asian Elephant and descended from a captive population. In 2003, DNA comparison revealed them to be a new subspecies. In Augut 2007, it was reported that there are probably not more than 1,000 pygmy elephants left in Sabah, after a two year study by WWF.

Further discussions are now mentioning the cryptid status of the Pygmy Elephants of India. Kani tribals dwelling in the rain forests of the Western Ghats, Kerala, India, claim that there are two distinct varieties of elephants in the Peppara forest range (part of Western Ghat), one the common Indian elephants and the other a dwarf variety which they call “Kallana.” The existence of a pygmy variety of elephant in India has not been scientifically ascertained.