You are here: Home / Donnie Darko and Bunny Men 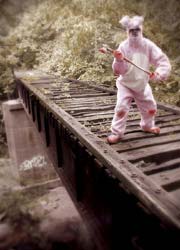 The Bunny Man is a local legend based in Clifton, in Fairfax County, Virginia. It goes from a mild folkloric tale to an extreme urban horror legend. The story is about an allegedly real-life man-sized creature or a man-in-a-bunny-suit going around and killing people. The incidents seem to be based factually on some mysterious deaths. One University of Maryland researcher, Patricia Johnson wrote a 1973 folklore paper entitled “The Bunny Man.” She interviewed 33 students, but found only three actually mentioned a murder. 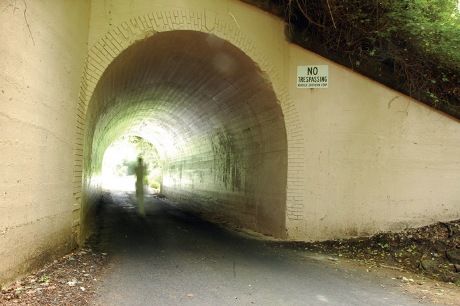 The Bunny Man is one of the strange tales explored in Weird Virginia, published in March 2007. (The incidents are not told comically, as might be assumed from the image on the Weird US site, but with more Fortean respect, as per all of the Weird books’ treatments.) 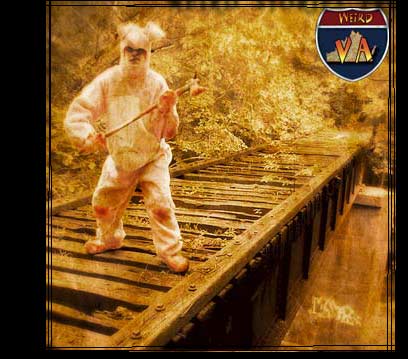 An intriguing movie was released in 2001 that has strange images and links to the Bunnyman folklore, not the least of which is the giant figure of Frank (seen at top). This is not your grandfather’s Harvey. No, not at all. All month, February 2007, cable television channels have been broadcasting this independent film, entitled Donnie Darko, sometimes as often as four times a day. The setting for Donnie Darko is in the fictional town of Middlesex, Virginia, so certainly Fairfax County’s Bunny Man seems to have had some influence (perhaps if only in location). 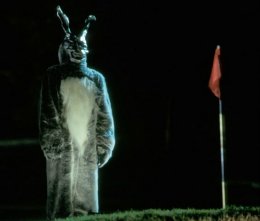 The following cartoon review of Donnie Darko is courtesy of Mark Monlux and his site, “The Comic Critic: Home of the Creative Mind”. 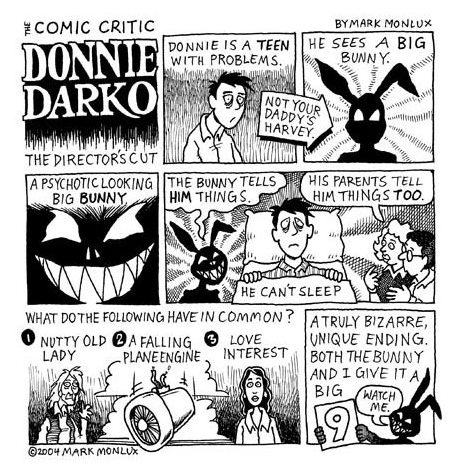 Donnie Darko‘s 20-something director Richard Kelly likes to say that his first feature is a “science-fiction coming of age tale”….Donnie Darko is set in 1988, in the lead up to the Bush-Dukakis presidential elections with its locale being a plush American tidy-town in comfy suburbia. Surfing a wave of pop references as far afield as Magnolia, Edward Scissorhands, The X-Files TV series, the portraits of Margaret Keene, Harvey and novel Catcher In The Rye, Donnie Darko is a gothic and darkly humorous lament, which poetically drifts into murky a pool of suburbia, mental illness, monstrous apparitions and a parallel universe….There is no doubt that Donnie Darko will be seen as too weird for some, or for those who reckon they’ve seen it all before, it will be written off as a piece of over-indulgent, over-privileged “wank” (don’ count this reviewer as one). Donnie Darko is menacing, dreamy, exciting and it could take you to a deeply emotional place lying dormant in your soul, waiting to be awakened by a film like this one, should you choose to invite it in….Donnie Darko may not be the most important film of the year, but it could be one of the best. What is important is that movies like this are made, and are seen by those open to the great possibilities of life and cinema….Unsigned Reviewer, www.abc.net.au 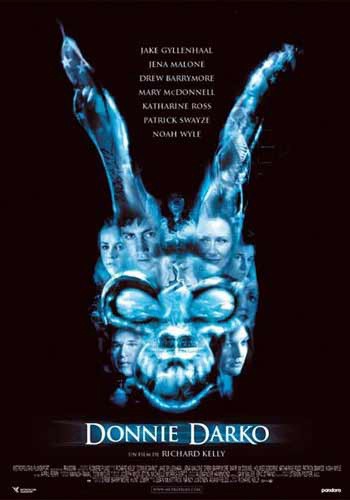 One of the songs in Donnie Darko is Echo and the Bunnymen’s “The Killing Moon.”

For those looking for a concrete location where the Bunny Man sightings have been said to occur try the “Bunny Man Bridge” (see below), which is located along the Norfolk Southern railroad tracks at Colchester Road, Fairfax County, Virginia. 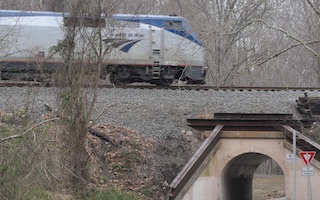 This blog is dedicated to Donnie Darko fan CCCC.

Please, no spoilers in the comments. 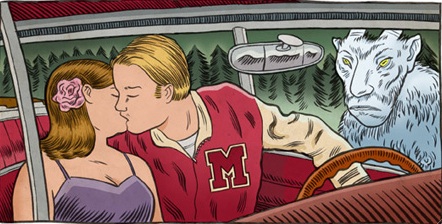 For more on the related Goatman, see here.