You are here: Home / Cryptozoologist of the Year: The Golden Yeti 2021 Goes To Daniel Perez

Cryptozoologist of the Year: The Golden Yeti 2021 Goes To Daniel Perez

Cryptozoologist of the Year: 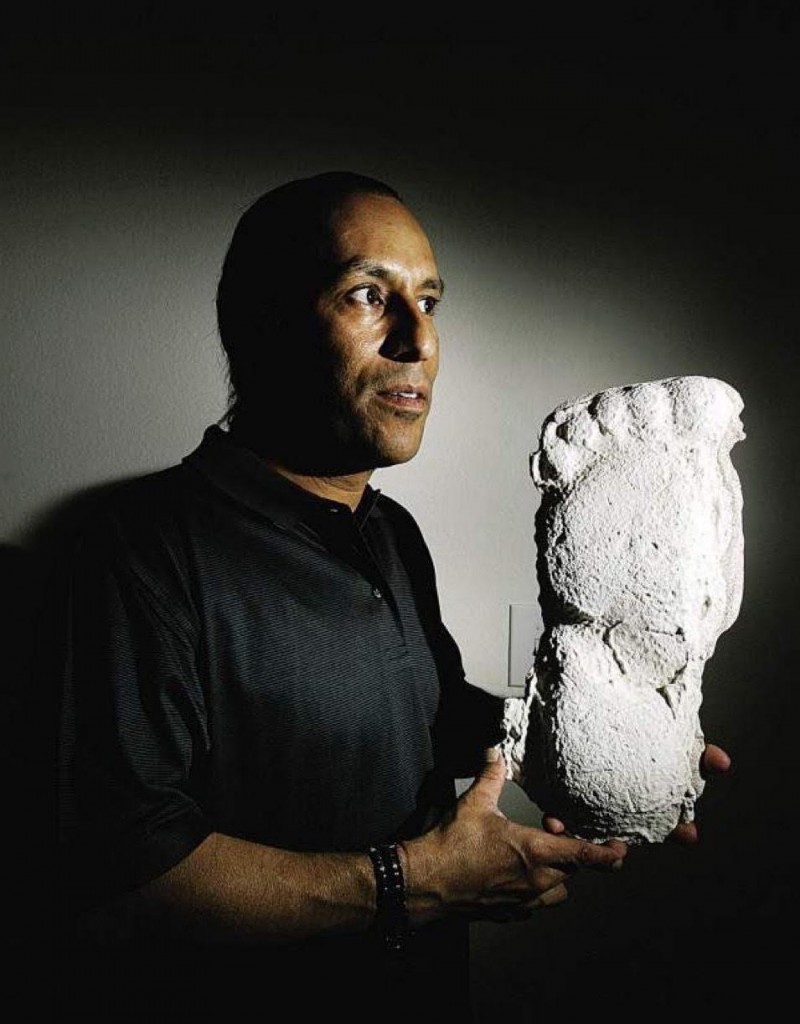 This past May 31, 2021 was Daniel Perez’s 58th birthday. After a lifetime of Bigfoot research, Bigfoot writings, and the editorship of Bigfoot Times, Perez is long overdue for recognition as “The Cryptozoologist of the Year,” for 2021. 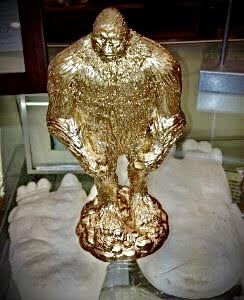 For almost five decades, Perez has held a deep interest in Bigfoot, traveling far and wide, moderating conferences, and putting himself right in the middle of debates and personality conflicts in the field.

Daniel Perez is a people person. He is as well known for seeking in-depth personal information about the pursuers of hairy unknown hominoids as he is for gathering long-forgotten facts about Bigfoot itself.

In the 1990s, Perez was known to many as the “Jerry Springer” of Bigfootry for the rumors he printed in his Bigfoot Times newsletter and the fights he’s refereed at pre-pandemic conferences. He’s been called a saint, a skeptic, a Bigfoot journalist, and a Bluff Creek expert. A combination of Dan Rather, Chris Wallace, and Rachel Maddow. A gossip. An investigative reporter. A guy that stirs up the pot. An emcee, a silent observer, a heckler. 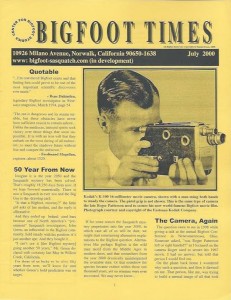 Perez has the honor of being called the “Historian of the Camera” for the background data he has discovered on the filmmaking equipment used by Roger Patterson at Bluff Creek, California, on October 20, 1967. He is known as a detail man who has always been interested in looking deeply to correct the accepted history of the “film” with the facts. For example, Daniel Perez remarked in correspondence to me that he was the person “who figured out who wrote the first newspaper article on the P-G film: Al Tostado. And it was [Daniel Perez] who conducted the only videotaped deposition with the late Richard Henry, the man who drove Jim McClarin to the filmsite on November 5, 1967. And it was [Daniel Perez] who pointed out the universal internet/book error: Paul Freeman’s Bigfoot video was shot in 1992, not 1994.”

There still are lots of people, who call Daniel Perez, especially behind his back, affectionately “Danny,” from his early, youthful, excited, beginning days. However, nowadays don’t publicly address him as “Danny,” any longer, or the next time he writes about you, he’ll pointedly use your entire name, including your middle name, even after you ask him not to.  That’s Daniel. 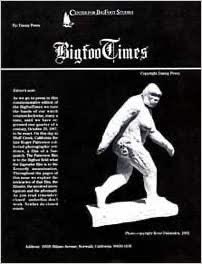 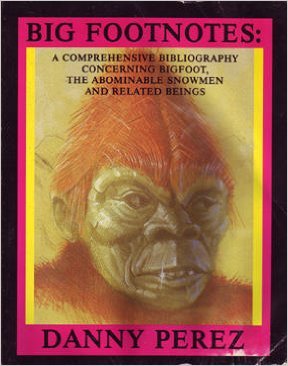 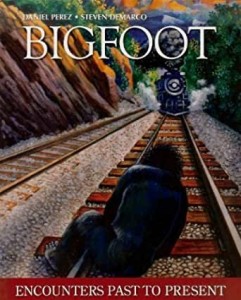 Daniel Perez has been involved in writing three lengthy works for the literature: Bigfoot at Bluff Creek (1994), Big Footnotes: A Comprehensive Bibliography Concerning Bigfoot, the Abominable Snowman and Related Beings (1998), and Bigfoot: Encounters Past and Present (2012). 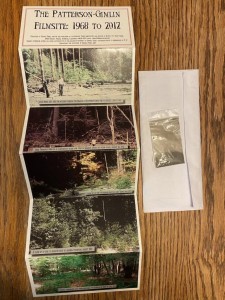 Perez’s foldout, The Patterson-Gimlin Filmsite: 1968-2012, even included a packet of soil from the location.

Do not bother Daniel with trying to convince him he should call the unknown hominoids “Sasquatch” to sound more scientific. He won’t hear it. To Daniel Perez, it’s “Bigfoot” and we happen to live in interesting “Bigfoot times.”

About many grassroots things, Daniel may be truly correct. Perez is a unique member of the Bigfoot community, a bright and dynamic self-made man and Bigfootry is lucky to have him. 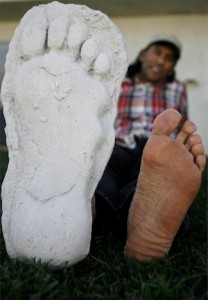 It all began for Daniel Perez, when, in 1973, he was taken to a Bigfoot movie by his family. Reporter Daniel de Vise wrote about the experience in The Long Beach Press Telegram on Monday, July 11, 1994:

Perez’s first exposure to Bigfoot came at age 10, when he went with the family to see the film The Legend of Boggy Creek. The movie’s paranormal implications baffled a boy whose mental curiosity had led him toward math, science and other fields where, as he says, “things have to add up.”

“The movie hit me like a ton of bricks,” Perez recalled. “I absolutely could not believe that these people were claiming to see these creatures. You’re taught to believe that the bogeyman and all those creatures do not exist. So I pooh-poohed it.”

“As I read more, though, I started to realize that some highly credible people from all walks of life were having sightings. I started looking at it objectively, and thinking, ‘There might be something to this.”’ Perez began corresponding with fellow Bigfoot seekers in 1978, as he was finishing high school.

David Kelly interviewed Daniel Perez in 2007, and wrote in the Los Angeles Times of December 26, 2007:

“Perez’s pursuit of Bigfoot began at age 10 after he watched The Legend of Boggy Creek (1973) at a Norwalk [California] theater. The documentary-style film dealt with a Bigfoot-like beast frightening rural Fouke, Ark. [people].

“I thought it was just another monster movie, but it turned out to be the paving stone to who I am today,” he said.

He immediately went to the library and withdrew books about Bigfoot and other creatures, including the Loch Ness monster. He wrote letters to Bigfoot experts, who impressed him with their earnestness.

“It was almost like a science project for him,” recalled his father, Edward. “It was something to keep him busy and enabled him to figure out what’s what.”

“I think my mom for sure thought this was going to be a phase that I would grow out of,” Perez said. “But it wasn’t. This is what makes me tick.” Perez was the third of four children born into a middle-class Norwalk home.

His father was an electrical test engineer for Rockwell International Corp., his mother a homemaker. Danny was an A student and cross-country runner at Santa Fe High School in Santa Fe Springs. All three of Perez’s siblings are now married, but Danny remains single. “I fell in love at a very early age with the field of Bigfooting,” Perez said. “So I guess you could say I got married before any of them.” 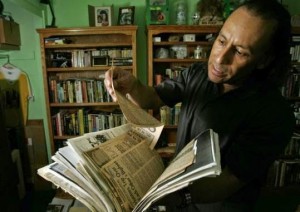 He founded the Center for Bigfoot Studies in 1984. As the pile of clippings and letters grew, he moved it from a JCPenney shoe box to a file cabinet and then a computer. Perez splits his time between homes in Norwalk and Riverside, where he works as an electrician. He’s had the day job…, but considers Bigfooting far more than a pastime. “People tell me this is a hobby,” Perez said. “This is not a hobby. It is a scientific endeavor.”’

Daniel Perez, from 1979 through 1986, published his first variation of his newsletter, which he entitled BigfooTimes (as one word). He also sold Bigfoot plaster casts.

Then in late 1997, using his first laptop computer, he began publishing Bigfoot Times (two words). Despite the internet changing the landscape of the online world, Perez continued printing out his four-page newsletter, then sending it out via the U.S. mail, as close to once a month as he could. 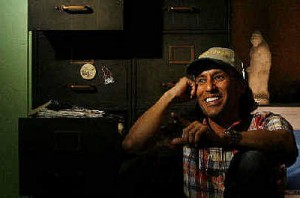 I quietly persisted with a four page newsletter that was as old-fashioned as they get: it is mailed to readers in an envelope. The  newsletter is printed on  sunburst yellow paper and the format was booklet: 11″ inches by 17″ inches.

As I wrote in the first edition of the Bigfoot Times. ”As usual, there are no ground rules and nothing is to[o] sacred to be discussed here.” A simple formula that I still embrace. Looking back but also looking ahead I think another reason for the longevity of the Bigfoot Times is  I was always willing to write what others were only thinking.  It’s that comment in conversation,  ”…tell us what you really think.” Well, just go to the Bigfoot Times.   The newsletter is mailed out every month and I have been doing so since our premiere issue came out last century, in January 1998.

Perez got to be known as the one to ask hard questions and criticize anyone. Writing of Perez at the “International Bigfoot Symposium” in Willow Creek, California, September 12-14, 2003, Paul Vella, using notes by Jerry Riedel, observed Perez speaking up at the Q&A session:

The inimitable Daniel Perez rose to pose a tough question to Bob Gimlin:

Perez: Did you and Patterson stop to shower on the way from Bluff Creek to drop the film for shipment?
Gimlin: Danny…I can’t remember.

Perez: In all the publicity surrounding the original article about the footprints published in the Eureka newspaper, did the editor actually write that article?
Gimlin: No, it was Betty Allen.

Q: If Jane Goodall came on board the bigfoot ‘field of investigation,’ would that increase the likelihood of more money flowing into the field?
A: from Green… “It certainly wouldn’t hurt.” Much laughter from Hodgson, “I think the symposium has been OK with the money we’ve had.” Much applause.

Q:  For Bob Gimlin: Do you regret the day you agreed to go with Roger Patterson?
Gimlin: Not today, not then, but there have been occasions I’ve regretted it. My wife has taken a lot of ribbing.

Daniel Perez, beginning in 1998, used his forum Bigfoot Times, to regularly name an annual Bigfooter of the Year. At the end of December 2021, the Bigfoot Times will mark 23 years of continuous publishing.
We wish to congratulate Perez for being acknowledged as 2021′s Cryptozoologist of the Year. 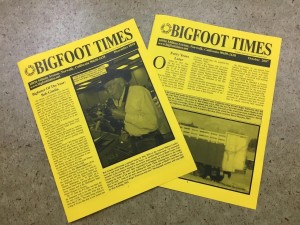 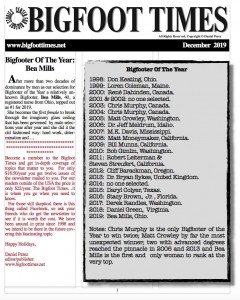 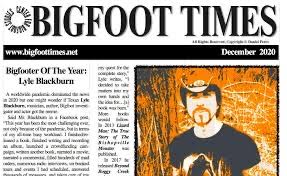 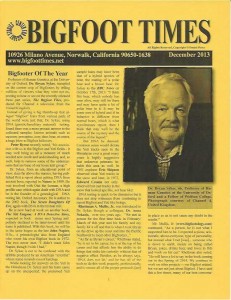 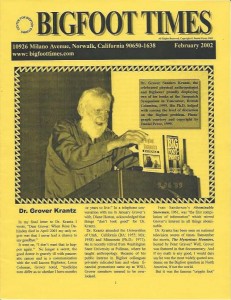 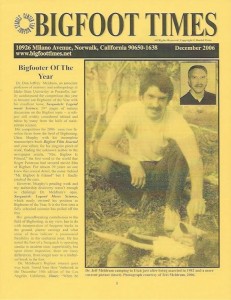 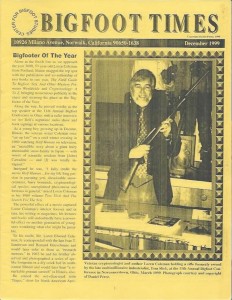 Daniel Perez has been at many of the critical Bigfoot conferences in recent hominology history. Chronicling and commenting on these events has been a delight of his all along the way. 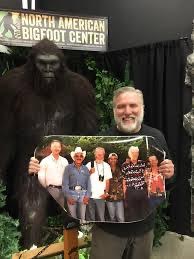 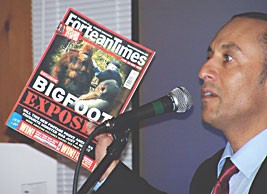 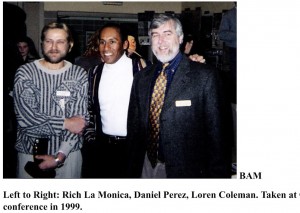 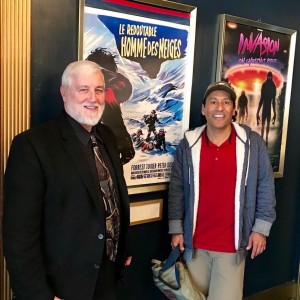 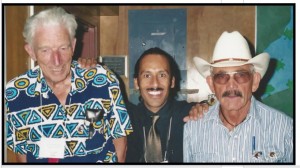 International Bigfoot Symposium, September 2003
+++
At top
In a frequently reproduced photograph, Daniel Perez is shown above at his Riverside residence in 2007, from where The Bigfoot Times once was published. Perez is holding a 14 1/2 inch long cast of Bigfoot track cast obtained from the Patterson-Gimlin film site in Bluff Creek, California, left on October 20, 1967. (Credit for the photograph goes to Irfan Khan of the Los Angeles Times who took it on November 20, 2007.)
+++
Top Cryptozoology Deaths of 2021
The Best Cryptozoology Books of 2021
See also:
The Golden Yetis: The Cryptozoologist of the Year 2020 & Lifetime Achievement Award 2020 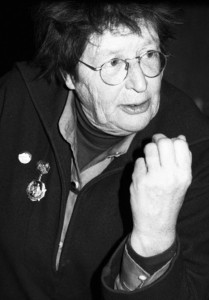 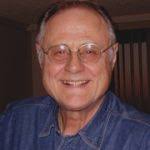 Cryptozoologists of the Year 2019 ~ The Trinity from Texas

Cryptozoologist of the Year 2018: Anna Nekaris