You are here: Home / Cryptozoologist of 2008: Dr. Andrea Marshall

One of the greatest discoveries of cryptozoology for the Year 2008 has been the verification of a new species of giant manta ray, the world’s largest species, which was identified for the first time.

As mentioned in my and Patrick Huyghe’s field guide on such matters, the encounters with “Mystery Mantas” have been of interest to cryptozoologists for decades.

During 2008, a hard-working scientist announced the discovery of a new species of giant manta ray, after her half-decade of concentrated research to achieve this objective.

Marine biologist Dr. Andrea Marshall confirmed that a larger and more elusive manta is in fact a distinct species. Until now, it was thought that there was only one manta ray species. 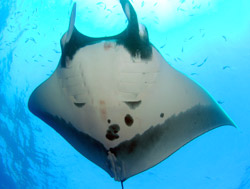 The newly-discovered species (above) leads a different lifestyle than its smaller cousin and is migratory rather than residential. The new manta ray has large triangular pectoral fins, which can span almost 26 feet or 8 meters in width and can weigh more than 4409 pounds or 2,000 kilograms.

Andrea Marshall is a Ph. D. marine biologist sponsored by the Save Our Seas Foundation (SOSF), who has advanced scientific knowledge of the ray.

In 2003, Marshall moved to a small coastal village in southern Mozambique, to become the first marine biologist to study manta rays off the African coast. When you consider how seemingly commonplace these remarkable animals are, it is startling to know that they had gone unstudied from Africa.

Marshall took her time, and through careful observations of the unique spot patterns on the ventral surface of each ray, she individually identified more than 900 individuals on a single reef. She believes that southern Mozambique may boast the largest known population of manta rays in the world.

In 2008, after all of her on-site work and confirming lab findings, Marshall had identified the giant manta ray as a distinctive new species.

Many of these newly identified giant mantas fall victim to ghost nets and are killed alongside other marine creatures as by-catch. Rays are also threatened by habitat degradation, boat traffic and disturbance by divers. Dr. Andrea Marshall is an intelligent and media-friendly spokeperson for the conservation of manta rays.

Congratulations to Dr. Andrea Marshall for her incredible study, which has taken cryptozoological and zoological hints and turned them into the discovery of a new species.

Dr. Marshall is 2008′s Cryptozoologist of the Year!!