You are here: Home / CryptoCinema To Shine in ’09?

Will it be thee?

With signs of the second Great Depression nipping at our frosty heels, and all indicators pointing to motion pictures being a badly needed form of escapism during these times, I anticipate that 2009 shall be a big film year.

Do you remember what kinds of films ultimately became the most successful during the 1930s and early 1940s? Let me give you a hint…those who were pure of heart had little to fear.

Therefore, let’s have a look at a few films waiting in the wings that spill over into all of our cryptozoological interests (i.e. cryptocinema).

In terms of forthcoming releases, the movies to watch include the following.

Watchmen: Scheduled, famously, for 03.06.09 (clever), this cryptopolitical more than cryptozoo film will follow in the successful wake of the visually beautiful 300 (which is a “character” in Peyton Reed’s Yes Man). Alan Moore’s graphic novel is called the “Citizen Kane of Comics,” and thus great expectations proceed this movie. 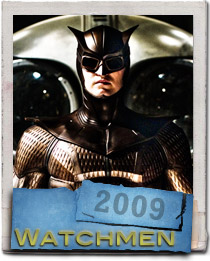 Any storyline that has a caped anti-hero named Mothman (Nite Owl II is shown above) in it is well-worth our attention. (It seems like such a long time since The Mothman Prophecies was released, in 2002.)

Look for Watchmen to be big, really big box office.

The Wolfman: The full moon of November 2nd may get folks ready to watch this one when it hits theaters on November 6th.

Already it is one of the top picks for a cryptocinema favorite of the year. This movie remake of Lon Chaney Jr.’s 1941 Universal classic The Wolf Man is putting all the right pieces together.

Another possible 2009 opening is Creature from the Black Lagoon TBA, also from Universal. Unless it comes out in 2010.

Will there be news in ’09 on the Tom Slick project too?

Meanwhile, in development hell, apparently, is 20,000 Leagues Under the Sea TBA. The giant squid has to wait another year.

Where are the Bigfoot and Yeti films for the year?

What forthcoming films have you heard any rumors about?

Monsters vs. Aliens: Coming March 27, a children’s film you might enjoy with your cryptozoologists-in-training. This one is more about pretend than reality, of course, (as if Watchmen‘s “alternative history” isn’t?). But then anything with characters in it named “The Missing Link” and “Insectosaurus” (a 350-foot-long grub) might be a great distraction.

Land of the Lost: This June 5 film will get a lot of buzz because it stars Will Ferrell and Jorma Taccone plays the “Missing Link.” (Is there a theme developing here with hairy hominoids?) While the television series may be a long-forgotten or a cherished memory to some, this movie probably will be merely recalled as another feral (sic) comedy after it comes out.

Where the Wild Things Are: Max and his creatures come to the big screen on October 16.

The combo of the famed director Spike Jonze plus his three years work on this one could equal a surprising rendering of Maurice Sendak’s well-known fable.

Thanks to Patrick Huyghe for a suggestion. And this site for the Watchmen/Mothman images.