Richie Rich is a funny name heard in the news today as a way to jab people like Republican candidate Mitt Romney. The name is not lost on the older generation, as it is a familiar comic character in bygone times.

Sid Couchey told Burlington art critic Pamela Polston in 2010, ““At one time, Richie Rich was the most popular comic book in the world, translated into many languages.”

Back in the day, Sid Couchey was a household name around Essex, Vermont, but, according to Polston before his death, “these days he’s arguably best known for his affectionate depictions of ‘Champ,’ the alleged behemoth serpent of Lake Champlain. Since moving upstate from New York City in 1961 with his wife, Ruth (to whom he proposed through a “Little Lotta” comic 51 years ago), the Cleveland-born Couchey has adopted the mythical creature, artistically speaking. He refers to Champ as decidedly real…and has built a body of artworks around it.”

Couchey painted “Champy by the Masters,” a series of images, along with his daughter Laura Abate, of the Lake Champlain Monsters in the styles of such artists as Picasso and Monet.

Cartoonist Sid Couchey looks at some of his illustrations with (from left) daughter Laura Abate and grandchildren Lucas and Christian Abate. 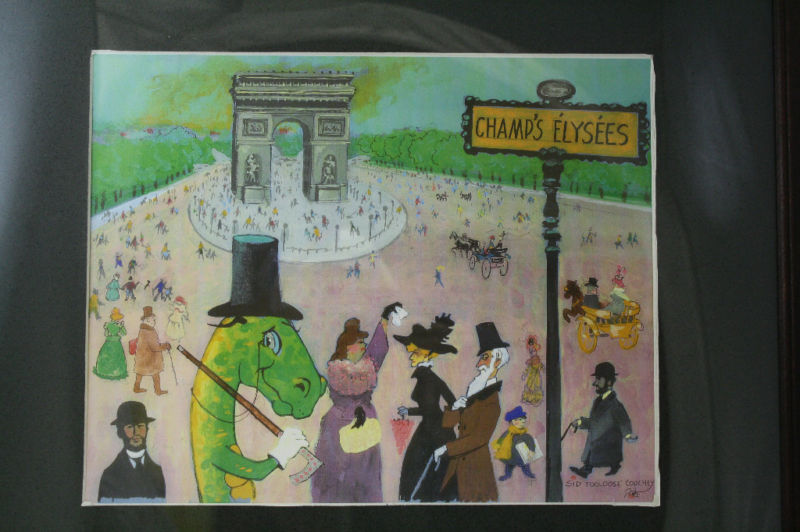 Sid Couchey, in a flamboyant Cleveland Indians shirt that only begins to express his passion for the baseball team from his childhood home, showed one of his recent, 2010 interpretations of the Lake Champlain Monster, entitled Champy’s Birth.

Sid Couchey serves up the first pitch at Olympic Stadium in Montreal before an Expos game against the Cleveland Indians in August 2002. He took great pains to read the catcher’s signs, using binoculars, before hurling the ball.

“It’s an exceptionally rare cancer,” his daughter told a newspaper reporter. “Leave it to Dad to get something extraordinarily unique.”

Sid Couchey was a cartoonist who drew such characters as Richie Rich, Little Dot and Little Lotta for Harvey Comics for many years. He also created a mascot for the 1980 Winter Olympics in Lake Placid. He dreamed up many characters for several good causes during his lifetime. He was a great fan of the Cleveland Indians baseball team.

“Although Sid was full of humor, he was not profane, and did not like harsh language,” Dr. Nick Muller of Essex said. “Sid was a true gentleman. He loved talking to people, especially when he did things like setting up a booth during Essex Days to sell his Champy prints.”

Local historian Morris Glenn first met Sid in the 1960s, and the two worked together on several publications, the most recent entitled A Walk Around Whallons Bay, expected to be published during the summer of 2012. Another book they collaborated on, A Sketch Book of Essex County Railroad Stations, shows Sid’s attention to details with his precise pen and ink drawings.

The two also shared a fascination with Champy.

“He was the Pied Piper of Champ,” Glenn said.

Other remembrances can be found here, here, and here.