The 2018 news from the coelacanth field made for another great year-end list, herewith shared and sourced.

With deep appreciation, I point to Rik Nulens of Belgium, who assembles a new coelacanth bibliography and inventory updates every year, for the last 24 years. The news below is his words reworked for this list and I thank him.

This compilation is posted for all readers of the CryptoZooNews (who are also aware that the coelacanth is the logo of the International Cryptozoology Museum in Portland, Maine).

The Fourth Annual International Cryptozoology Conference will be held in Portland, Maine, within walking distance of the world’s only cryptozoology museum on April 26 through 28, 2019. For more information on the Conference, see here, and for info & tickets, here.

Now, the top stories of 2018 in the realm of the “living fossils” of Latimeria.

(1) A new Indonesian Coelacanth (Latimeria menadoensis) was discovered in 2018.

Every new discovery of a coelacanth is a monumental find. Those from Indonesia are fewer, and to find a new population in that section of the world is even more remarkable.

On July 1st, 2018, this coelacanth was captured with a handline by a sport fisherman, Mr. Dava Santoso, in the region of Raja Ampat, Papua-Indonesia. (Unfortunately, this specimen is not saved, but it was eaten.) 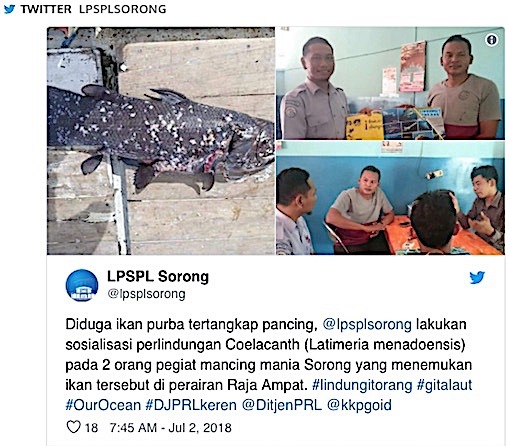 CCC 305 was captured on July 1, 2018, near Urbinasopen village off southeast Waigeo in northern Raja Ampat, Indonesia, by Dava Santoso and a collegue, at a depth of about 300 meters, using sibula (large sardines) and squid. It was 102.5 cm in length. The gender was unknown. Unfortunately this specimen was filleted and most of it was consumed, so exact morphological and meristic studies were not possible. However, tissue samples were successfully obtained and could be analyzed.

The specimen was caught in Waigeo waters, with the weather was sunny and the situation calm wave.

Photographs were taken by Dava Santoso and his team, and then on July 2, 2018 (09:30 CEST), they were posted on Facebook social media page, to ask what type of fish it was, as well as asking for relevant agencies that can be contacted to report the discovery.

As pointed out in “A Living Reef Fossil: New Population of Coelacanth Discovered,” by Joe Rowlett late in 2018, this new find was by “fishermen [who] stumbled upon the first ever coelacanth at Raja Ampat…. Prior to this, L. menadoensis had been known solely from the type locality at Manado, Sulawesi (where all of the half-dozen or so specimens collected for science have come from) and from ROVs that observed them in situ further east at Biak, the island that partially closes off Cenderawasih Bay in West Papua. These localities sit around 760 miles (1230 km) apart from one another, as the crow flies, and together they mark the rough edges of an ecoregion that has been observed in other groups of reef fishes.” 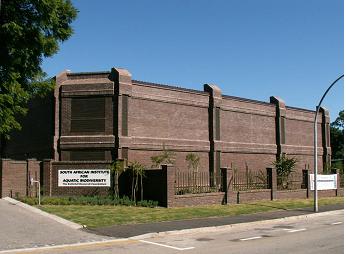 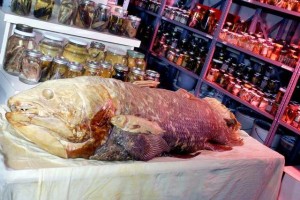 On December 13, 1968, the JLB Smith Institute was created in his memory with Margaret Smith as the first Director. Now re-named the South African Institute for Aquatic Science, the JLB Smith Institute was founded in Grahamstown, South Africa in memory of Professor J.L.B. Smith who passed away in 1968, the morning of January 8th. Margaret M. Smith (nee Mcdonald) became the first Director. 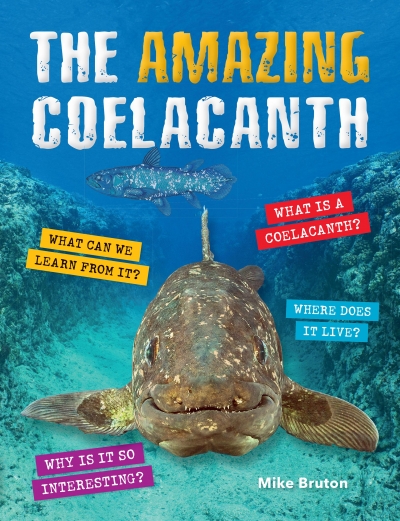 After The Annotated Old Fourlegs was published in 2017, Professor Mike Bruton, former Director of the JLB Institute of Ichthyology (now SAIAB) in Grahamstown, continued publishing coelacanth-related books. The Amazing Coelacanth was published April 2018 by Struik Nature. It is specially written for younger people and students aging 9-14 years. 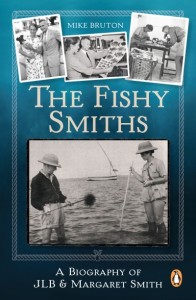 Also The Fishy Smiths, another new book by Mike Bruton, is a biography of JLB & Margaret Smith, which was released in September 2018. 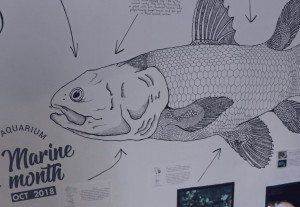 After a night of fishing on his vessel Nerine, Captain Hendrik Goosen had put aside a so called “pile of fish” for Miss Marjorie Courtenay-Latimer, curator of the East London Museum (SA). It was in this pile of mostly sharks that Marjorie Courtenay-Latimer saw in December 1938, the heavily blue scaled fish that even Hendrik Goosen never saw in his career. Source. Margaret Mary Mcdonald and JLB Smith were married on the 14th April 1938 ! Also 80 years ago !

October 11, 2018 was the opening of a new interactive exhibit “Discover The Coelacanth” at Two Oceans Aquarium in Cape Town, South Africa to commemorate the 80th anniversary of the Coelacanth find. Source. 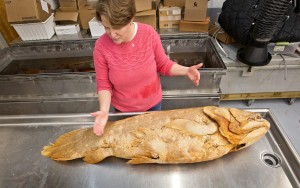 During 2017, the Virginia Institute of Marine Science’s coelacanth [CCC 141] needed a new “home.” The Coelacanth Brewing Company Norfolk (opened December 2015, founded and owned by Mr Kevin Erskine) joined forces with VIMS. Together, on May 11, 2017, they joined to help raise money for a new tank so that the coelacanth could take her rightful place back in the visitor center at VIMS. 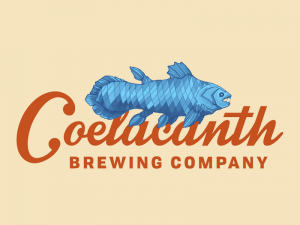 The slogan was “Come help this handsome bastard to get a new home. Every beer you buy goes towards replacing the tank!” was a great success that resulted in the April 2018 opening of the VIMS Visitors Center. The specimen remains in a 70% ethanol liquid.

(6) Hunt for the coelacanth continued. 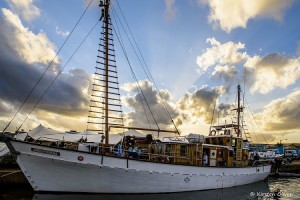 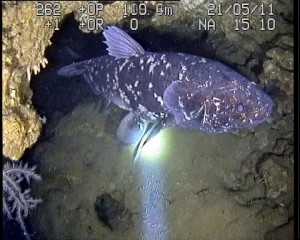 In June 2018 there was a ‘hunt for ‘dinosaurs’ in Sodwana Bay’s underwater canyons. The two-week expedition was led by Dr Mandy Lombard (Nelson Mandela University) and Dr Jean Harris (WILDOCEANS). It was supported by both WILDOCEANS, who provided the Research Vessel Angra Pequena, and ACEP who provided funding, technical and logistical support. A film-crew from Off the Fence (OTF) nature & wildlife film production company was also present. The OTF production company will be filming off Sodwana as part of the first episode of a documentary series entitled Our Oceans: Dinosaurs in the Deep. The series will document a range of threats to the coelacanth’s ecosystem from overfishing to mining, pollution and climate change: threats encountered by all the world’s oceans. Sources: 1, 2, 3.

In the meantime, a Japanese film team had a dive expedition and was based at TRITON Dive Lodge.

(7) A coelacanth brain lost and found. 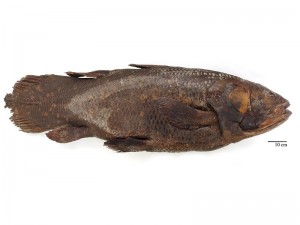 At 160 pounds and 5.5 feet long, the Smithsonian coelacanth is about average in size. This example of Latimeria chalumnae was taken near the Comoros Islands off east Africa in the mid-1960s.

Coelacanths are numbered and tracked.

The Smithsonian Coelacanth [CCC 57] was donated by Dr H.N. Schnitzlein, who bought that Coelacanth for his own studies. But the Coelacanth arrived at Smithsonian without his brain. When Schnitzlein moved to the University of South Florida College of Medicine in 1973, he took his brain slide collection with him. When he retired in 1994, the USF medical school did not want to maintain his collections of fish brain slides. Schnitzlein gave the collection to Harry Grier, a research associate at the Natural History museum and a fish reproductive biologist at the Florida Fish and Wildlife Research lab in St. Petersburg, Florida. Grier put the slides in a cabinet for safe keeping… and the story continued…

What further happened with the “Brain-collection,” one can read in the interesting March 2018 article from Lynne Parenti, here.

Coelacanth brain research has been a very popular research objective, so at this time many Coelacanths are stored in collections without their brain.

(8) New 2018 efforts launched to save the last South African coelacanths.

Just 30 of the special South African population is known to exist, raising fears that the current oil wells will push it to extinction. The Rome-based energy group Eni plans to drill several deep-water oil wells in a 400km long exploration block known as Block ER236 at South Africa’s eastern coast. The SA Coelacanth population lives only 40km more to the north.

Dr Andrew Venter, the chief executive of Wildtrust, one of several conservation groups lobbying for a significant expansion of South Africa’s protected ocean areas, said in 2018: “The Deepwater Horizon oil spill in the Gulf of Mexico in 2010 decimated fish populations – so if we had an oil spill off iSimangaliso it is very likely it could wipe out these coelacanths.” Source.

The Department of Environmental Affairs also announced that Cabinet approved a network of 20 new Marine Protected Areas (MPAs) that are representative of South Africa’s rich coastal and ocean biodiversity. This will increase protection of the ocean around South Africa from 0.4 to 5%. The new areas will advance ocean protection by approximately 50 000 km2, an area two and half times the size of the Kruger National Park.

Mr Derek Hanekom, the Acting Minister of Environmental Affairs said “This network of 20 MPAs, approved by Cabinet at the end of October 2018, will considerably advance South Africa’s efforts to protect our ocean heritage for future generations. They will contribute to fisheries sustainability, advance marine ecotourism, and will help maintain resilience in ecosystems that are under stress from climate change”. Isimangaliso is already part of Africa’s longest transfrontier MPA with Mozambique and is incorporated as one of UNESCO’s 49 global marine World Heritage Sites.

Dr Kerry Sink of the SA National Biodiversity Institute (SANBI) – one of the lead drivers of this initiative – said: “This is vitally important for the protection of deep water ecosystem, but also our critically endangered Leatherback turtles and coelacanths which need offshore protection to secure their habitats and foraging areas.” Sources: 1, 2, 3.

Coelacanth books on the horizon 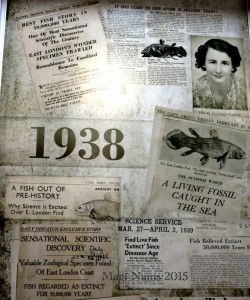 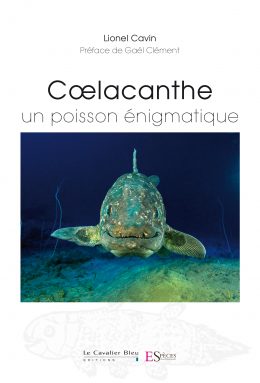 From Switzerland, Rik Nulens received word that another new coelacanth book is forthcoming.

Mr. Lionel Cavin, the conservator of the Département de géologie et paléontologie at the Muséum d’Histoire naturelle in Geneva, Switzerland, with a speciality in fossil fishes, has written a book : Cœlacanthe: un poisson énigmatique.

This edition will be available in January 2019 and is written in French. 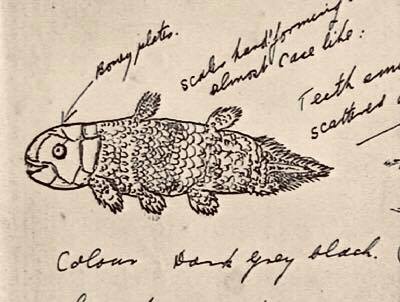 Eighty years ago… On January 3, 1939, East London Museum (South Africa) Director Marjorie Courtenay-Latimer’s letter to Professor J.L.B. Smith of Rhodes University arrived. She included a drawing of a strange fish she had just recovered from a fish catch off the coast of South Africa. It would turn out to be the first re-discovered Coelacanth, thought extinct for 65 million years.