Newcastle, UK: The home of the infamous Lambton Worm, known for its Curse and the Lambton Worm song.

With no official Fortean Times UnConvention this year (and, as I understand it, little prospect of one in the foreseeable future), FT stalwart Ian Simmons assumed the task of organising a partial substitute. Conveniently, Ian holds a senior job at the ‘Centre for Life’ science museum in Newcastle-upon-Tyne, which just happened to be hosting a ‘Myths & Monsters’ exhibition on loan from London’s Natural History Museum. The opportunity for Newcastle’s first Monster Weekend was too good to pass up.

The weekend started in the UnCon tradition, with an UnDrink at the excellent Cooperage pub. Many of the (un)usual suspects attended, with the exception of Loren who was unfortunately stranded on the far side of the Atlantic (reports of a large moth-like entity being sucked into the jet of his aeroplane remain unsubstantiated, however). A few pints of local brew later, it was up the hill to the Mongolian buffet, thence to another pub for more of the similar.

The official proceedings kicked off on Saturday morning with the Centre for Fortean Zoology’s relentless Richard Freeman on dragons, which seemed popular with the children in the audience, several of whom had some pretty intelligent questions after each talk. The presence of kids did require certain speakers to omit some more adult-rated elements of their talks, but it was good to see these fortean wonders being fed to the next generation – tempered by a slight jealousy that there wasn’t this sort of thing happening when I was a nipper.

Charles Paxton followed with his talk on sea monsters, statistical analysis, and whale penises (tastefully handled, of course). I’d met Charles (a pretty serious scientist in his day job, albeit an IgNobel laureate) a few years earlier at his first UnCon, at which he seemed rather bemused by it all, but I think he’s now come round more to the fortean mindset.

Gordon Rutter of the Edinburgh Fortean Society then finished the morning session with a rambunctious tour through the Imaginary Zoo of animals which really don’t exist, but which nevertheless are mostly to be found in his living room.

Quick lunch in the courtyard cafe at the Life centre, and then a trip in to see the Myths & Monsters exhibition. A decent show, dominated by the big animatronic beasties borrowed from the Natural History Museum, with a good selection of other fortean items including several from the Rutter Collection. 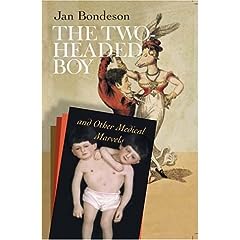 We stayed in the Life for a while longer to play with all the hands-on whatnots, missing the bulk of Jan Bondeson’s talk on two-headed children. We just caught the last 10 minutes or so which were interesting enough, if rather drier than the morning’s shows. And I’m afraid I still find it difficult to watch Jan without thinking of a Python-era Michael Palin playing a mad scientist.

Then came the redoubtable Gail Nina Anderson with one of her trademark trots through art history, this time concentrating on the representation of monsters as man-animal hybrids, from ancient times through Victorian painters (including Gustave Moreau, whose uncle I understand also had an interest in such hybrids) to some pretty awful new age whimsy. The appearance of the local Angel of the North seemed out of place in this context – it’s more a man-machine hybrid (half man, half Airbus) than man-animal. The day then wrapped with a brief panel discussion, after which the evening followed a broadly similar course to the Friday night. Newcastle’s rather energetic nightlife seemed to make an impression on some of the visitors to the city, even if the weirdness was strictly from the human zoo rather than the cryptozoological one.

Sunday’s programme, probably to the relief of many, started an hour later than Saturday’s. Ian Simmons stepped into the gap left by the mysteriously grounded Loren with a talk on the general nature of truth and evidence (an appropriately confusing move, given that Ian’s talk was originally scheduled for this slot anyway). A slightly worthy talk which doubtless fulfilled the science-communication remit of the weekend but which I suspect wouldn’t have grabbed the casual listener as much as the other talks. Jan Bondeson then returned with a surprisingly sprightly introduction to the history and possible reality of those favourite beasties, the basilisk and the vegetable lamb (and, in passing, the Scottish goose tree). After lunch, and a brief interlude of the famous gorilla perception test courtesy of Charles Paxton, Richard Freeman returned with an overview of his CFZ expeditions to various exotic parts – disappointingly, nothing new from his previous UnCon talks, but sure to grab the imagination of any kids remaining in the audience. Richard probably didn’t win many friends by implicitly insulting most of the other speakers and the audience as ‘weekend forteans’, though. And as he predicted at the start of his talk, he over-ran considerably so had to finish off after the end of the official proceedings.

Mark Pilkington and John Lundberg of the Strange Attractor multimedia empire then provided an introduction to their forthcoming ‘Mirage Men’ book and film on the twilight intersections of ufology and (counter)intelligence professionals. Intriguing stuff, if a little tangential to the main theme of the weekend, and sadly not the greatest presentation – just letting a video play for most of your timeslot isn’t as engaging as a live presentation. They inadvertently provided a valuable lesson for any public speaker, though – if you’re borrowing a laptop for a projected presentation, it’s probably wise to check the desktop for signs of barely-legal porn.

A rather unwell but still charming Mike Hallowell finished off with an introduction to a local beastie, the Shony, and its possible links with the infamous Lampton Worm – a very nice touch to finish off with some proper Geordie weirdness. Then, sadly, we had to run off for our train, without even time for a farewell pint, while Richard resumed his curtailed talk.

Overall, a great weekend, both for the talks and the surrounding festivities. It all felt a lot more open and family-friendly and less insular than UnCon can feel – while most of the individual talks probably didn’t contain much new information for the hardbitten fortean, most of these stories are well worth repeating, certainly to a new audience. If, as hoped, it becomes a regular event, further weird weekends in Newcastle will be a welcome addition to the fortean calendar.Tim Chapman, for Cryptomundo, September 3, 2007.

Thanks for this overview to Tim Chapman, who describes himself as a Yorkshire-based journalist and weekend Fortean.