You are here: Home / Details On Alabama “Gorilla” Sighting

On Saturday March 10, 2012 at approximately 7:33 p.m Hale County E-911 received a call from Perry County Dispatch advising several children on a school bus returning to Uniontown from a sporting event had seen what they believed to be a gorilla at AL Hwy 61 and Hale Co Rd 20 in the Town of Newbern.

Deputies responded and checked the area.

NO gorilla or other large primate was located. The Hale County Sheriff’s Office answers all calls for service in a professional and serious manner. This call, like all others, was investigated and until further evidence is discovered we consider this matter to be unfounded. 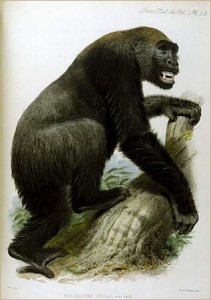 Thanks to reporter Travis Vaughn.