Earlier in May 2012, scientists at the Kunming Institute of Zoology announced they have discovered the world’s fifth species of snub-nosed monkey in China’s Nu River Valley. More widely known as the Myanmar Snub-nosed Monkey since it was first discovered in northeast Burma, this rare species has been dubbed the “Nu River snub-nosed monkey” in Chinese by scientists, who confirmed their relation to the Burmese species through a DNA analysis of their excrement collected near the Nu River in Yunnan province in March 2012. Forest guards in the Gaoligong Mountains nature preserve were also able to take pictures of a group of 60 to 80.

Meanwhile, new May 2012 sightings of the elusive Tonkin snub-nosed monkey  (above) are rare. It’s no wonder a recent sighting of a group in Vietnam has proved cause for celebration.

Believed to be fewer than 200 of the species remaining, this positive sighting by Fauna & Flora International’s community patrol group in Khau Ca forest, identified a group of 80 monkeys, including 16 infants.

Such large gatherings of leaf-eating primates are known to occur seasonally, but with the number of the species dwindling rapidly, groups of this size are rarely observed.

Tonkin snub-nosed monkeys are amongst the rarest primates in the world, found only in Vietnam. Despite strict legal protection under local laws, the species is heavily hunted and most of the remaining subpopulations are so small that their survival cannot be guaranteed.

The population at the Tonkin Snub-nosed Monkey Species and Habitat Conservation Area at Khau Ca, where this group was seen, is the largest remaining and is currently estimated to comprise a total of about 110 individuals. 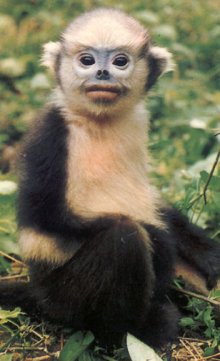 To breed successfully Tonkin snub-nosed monkeys need good quality forest and absolute safety from hunting. Fauna & Flora International has been supporting the local forest protection authorities in Khau Ca for a decade, to safeguard these impressive primates. The University of Colorado at Boulder and the Zoos of Denver, San Diego and Singapore also contribute to conservation at this site and the joint efforts appear to have led to a stabilisation and gradual recovery of the Tonkin snub-nosed monkey population at Khau Ca.

by Loren Coleman on May 22, 2012 in Breaking News, CryptoZoo News, New Species | Tagged New Species, Snub-Nosed Monkey
Previous Entry: Saola: 20 Years Later
Next Entry: Oxford-Lausanne Yeti DNA Study: Do You Have A Sample For Them?