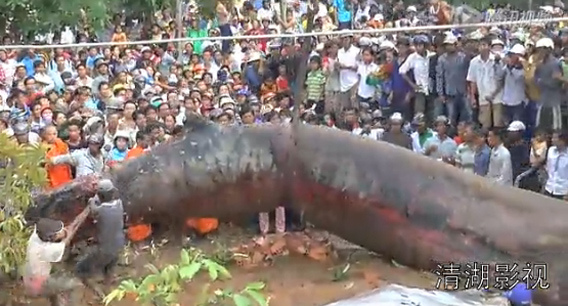 Sometimes it is good to look more closely at a story to see how misunderstandings develop and extra words are added to articles. Let’s take the case of the recent “Worm Monster” accounts, photos, and video from Southeast Asia. Because this story came out during the 50th anniversary week of the John F. Kennedy assassination, perhaps it got buried more than usual.

Anyway, early reports did not include many details, but, nevertheless, I was approached by a reporter for my opinion. I was shown one video. Stills were blurry, as they were from the video.

It was on November 20th when I was first asked by Huffington Post what I thought the “monster” might be. Here is what I told them:

In this case, this is clearly a baleen whale, one of the larger species. Better photos, a location (with info on the history of how it reached where it was found), and its exact measurements could tie down the specific species.

They followed up with more questions, and I carefully worded my response:

It appears to be a mid-sized finned baleen whale, not, for example, an adult humpback probably because they have huge fins. However, the growths on the snout are diagnostic, and a better look at those would be helpful. It is only a “monster” in the eyes of villagers and the media, perhaps, but to cryptozoologists, zoologists, and marine biologists, this is certainly a common baleen whale.

Huffington Post reported what I told them, thusly, in their story:

We’re going to go with “whale.”

But what kind of whale, exactly? Loren Coleman, director of the International Cryptozoology Museum in Portland, Maine, told The Huffington Post that based on the images, the creature appears to be the remains of a “mid-sized finned baleen whale,” possibly a fin whale. 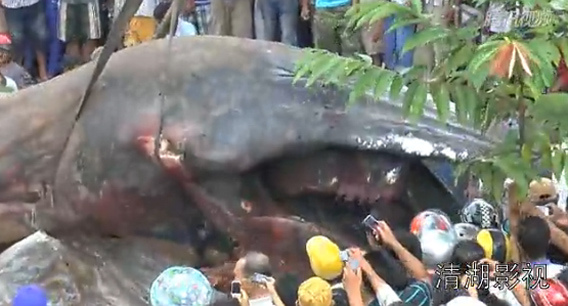 The “teeth” in the carcass’ jaw are actually baleen, according to Coleman.
“It is only a ‘monster’ in the eyes of villagers and the media, perhaps, but to cryptozoologists, zoologists, and marine biologists, this is certainly a common baleen whale,” Coleman wrote in an email to HuffPost.

However, Gary Griggs of the Long Marine Laboratory at UC Santa Cruz told HuffPost that the carcass might be that of a blue whale — the largest known creature on earth.

I had never said this was a “fin whale,” a specific species, and that new detail was shocking.

Later new photos were published and spinoffs of the story developed. But as usual, the media were quoting and misquoting each other. And adding their “pseudoscience” commentary too. I even saw one attempt to have Greg Griggs’ comment talk about a toothed whale versus mine about a baleen, to create tension between our opinions. We both were dealing with what visual clues we could see early in this case, that’s all. 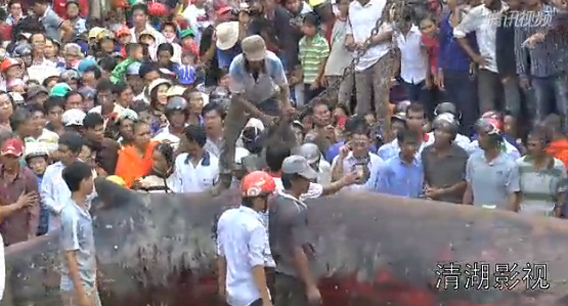 Take for example this news as carried in iscience news, where this is how it was communicated:

It seems this whole thing was either a hoax or a global, multilingual case of miscommunication. In some pictures, it sure looks like a worm monster. In others, it’s obviously a whale.

A couple of days ago, The Huffington Post confirmed it. They sought the counsel of Loren Coleman, director of the International Cryptozoology Museum in Portland, Maine. Cryptozoology is the pseudo-study of make believe creatures, like the Loch Ness Monster and Big Foot. In this case, however, Coleman is pretty sure: It’s probably a fin whale.

“It is only a ‘monster’ in the eyes of villagers and the media, perhaps, but to cryptozoologists, zoologists and marine biologists, this is certainly a common baleen whale,” he told The Huffington Post in an email. The website also reached out to Gary Griggs of the Long Marine Laboratory at UC Santa Cruz. Griggs says it’s definitely not a worm, but perhaps not a fin whale either. He said it’s a blue whale. 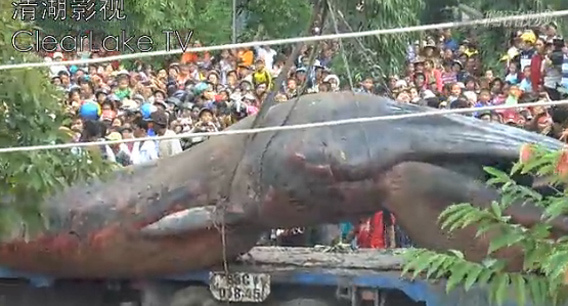 Of course, I never said, specially, it was a “fin whale.” I said it was a baleen whale, a general classification.

Germany cryptozoologist Markus Hemmler even wrote me saying, “Loren, I read that you told the Huff that the recently found ‘Graboid’ of Vietnam probably was a fin whale. It was a Bryde’s whale and I found out its probable complete history from its stranding to its grave. All the best, Markus”

For the record, then, I will share Markus Hemmler’s research findings, along with the videos (posted directly above) mentioned below in his discourse.

Beginning around 10th November a story circulates, that a giant, unknown creature was dug out in Vietnam. A video shows this elongated creature – surrounded from obviously asian people – as it is lifted onto a truck (in case you’ve missed the story). As usual the weirdest speculations arised mainly about a real “Graboid” from the movie “Tremors” or something similar (personally I see a similarity to a sandworm from the movie “Dune”). However more serious people agreed in thinking that it is nothing more than a baleen whale, seemingly of the rorqual family: the video has disturbances but in some sequences the typical skin furrows of the rorquals can be seen. Additionally the body is long, cigar-like with a triangular, pointed head, blowholes and an elongated, centered ridge from the tip of the rostrum to the blowhole. As for the exact species the opinions divided ranging from a (small) blue whale to a fin whale or a Bryde’s whale. It seemed to (Crypto-)Zoologist Cameron McCormick and myself the rostrum of this whale has three parallel ridges what is a distinct feature of the bryde whale (Balaenoptera brydei).

While there’s no doubt that it is a rorqual whale, there’s some doubt about the exact location (wrongly also Cambodschia was in question) and also if it is truly B. brydei. It is and here’s the full story…

In the morning of 11th October fisherman reported a stranded whale, about 13 to 15 meters long, in the mudflats about three kilometers from the coast off Vin Chau, Soc Trang, Vietnam. As can easily be seen from the available pictures this rorqual whale has three parallel ridges and therefore belongs to the bryde whales. People digged sand for water and set up tents in order to wait for the flood but for no avail. The whale died in the evening of the same day probably due to the intensive heat. Because whales are in vietnam also revered, a crane was hired to bring the carcass to an temple and to bury it (1, 2, 3 a news-video). The transport from the coast to the temple was filmed from various people, the longest video is from a person naming herself Minhvy Kim on YouTube. If someone has enough time and keen eyes search for similar clothed persons in both videos but comparing the trucks is much easier: in both videos the side of the truck is blue. In the “monster”-video beginning from about 1:26 to 1:44 you can watch a sign at the left side with the approximate inscription “BBC 018,45” and the same sign in Minhvy Kim’s video at 17:33 and 26:13. While it seems that the “monster”-video was filmed on the coast instead it was filmed before the whale was buried at the temple. At 1:59 in the “monster-“video and at 28: 47 in Minvhy Kim’s video you can see the same red tower with golden top in the background. Case solved and closed.

RocketNews24 published this clarification on the location:

***UPDATE*** We previously reported that the “monster” was found in Vietnam. After comments from some of our readers (thank you!), we did some fact checking and consulted a Vietnamese-speaker and found that it was actually found in Cambodia.