You are here: Home / New Ogopogo Sighting: A Photographic Update

Photographic evidence of the recent sighting has surfaced. What do you think? Is it Ogopogo, a big fish, a wake, or a mistake? You be the judge.

Cryptomundian rackliff tipped us off to the fact that David Woetzel had posted the following photographs of this purported encounter to his facebook page. 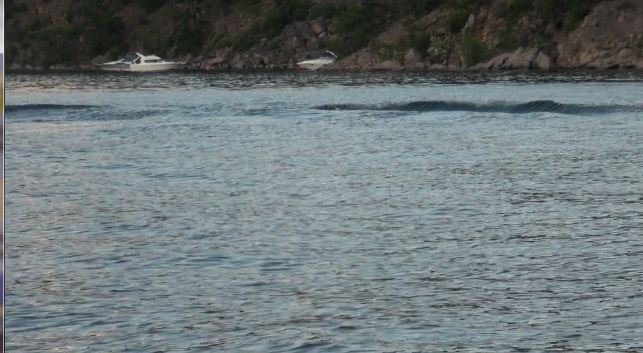 The above photo was taken after the creature had submerged. But the wake it left behind was pretty impressive.William J Gibbons 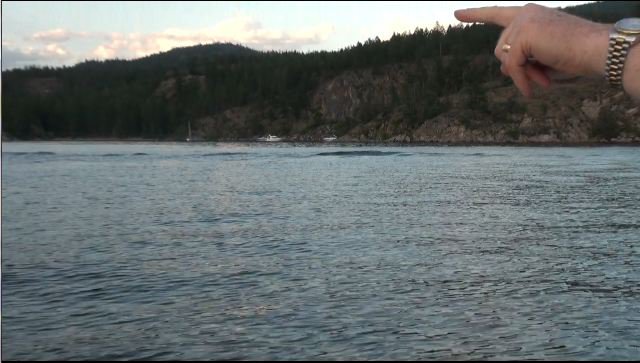 1. We did not set out to find Ogopogo on a short trip onto the lake. We were hoping to visit a few well-known “hotspots” in order to plan out a later expedition.

2. The film only shows the wake left by the creature. However, I did observe 3-4 humps just above the waves, which were darker than the waves themselves. Dorsal ridge was also clearly visible on the humps as I was focusing on the humps with a pair of binoculars. Dave Woetzel and my son, Andrew, may have briefly observed the head of the creature for a few seconds just above the waves.

3. The film shot by David Woetzel and the subsequent (still) images were remarkably similar to the Fletcher photo of an alleged Ogopogo, taken in 1976 and featured on page 111 of Arlene Gaal’s book, ‘in Search of Ogopogo.’

4. We have absolutely no interest in selling the film to the “highest bidder,” or seeking any further publicity outside the cryptozoological community, although a subsequent frame-by-frame of the Woetzel film may be conducted at a later time.

5. This was not a sturgeon (or two sturgeons), salmon, trout, krill, otters, or waves from a boat, etc. I have fished extensively in rivers, streams, lakes, the sea and all over the world. I have seen sizable fish and sharks of all kinds, not to mention crocodiles, hippos and elephants, etc in Africa. I have even seen monkeys swimming across a river in the Congo. The Lake Okanagan observation was unlike anything I had ever seen before.

6. The disturbance and sizable waves we observed were generated by an animate object directly from underneath the surface in flat clam conditions. The waves were at least 1.5 feet high and dissipated after the animal submerged 10-12 seconds later.

7. We did not advertise this sighting but only reported it to Arlene Gaal and John Kirk (who has seen Ogopogo 11 times in the past), [as well as Loren Coleman, of course].