You are here: Home / Sleeping Positions Among Wild People

Dmitri Bayanov passes along this reference to an example of a Sasquatch sleeping in the position discussed earlier here:
“Using binoculars at a distance of less than 200 yards, he found himself looking at two sasquatches sleeping out in the open, with their backs to the sky and their knees and elbows drawn in under their bodies.” (John Green, Sasquatch: The Apes Among Us, 1978, p. 425).

“With regards to your message about ‘planking’ among wild men,” writes French cryptozoologist Michel Raynal, “I had reported several cases of such a behaviour:

- almas sighted by Damdin in Mongolia (1960): see drawing and reference in my old article here: 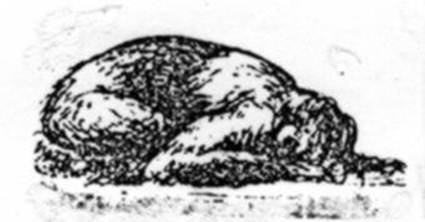 - so-called “osa de Cornellana” (she-bear from Cornellana, Spain) from another of my old article here:

In my opinion, it is a primitive behaviour to sleep, and a method to keep the internal heat.”

The legend from Cornellana, Spain, linked to this sculpture concerns an alleged female bear nursing a human child. Could it be a wild person instead? Below are other images of this art. It hardly seems to be representing a bear, at all.