Carl Roberts of Plattsburgh shows where he and two friends saw something strange near Wilcox Dock while fishing in Lake Champlain Thursday evening [June 4. 2009]. “It’s too surreal,” he said of the possibility that it could be the legendary lake creature Champ. “It’s like seeing an alien.”
Michael Betts / P-R Photo

Carl Roberts was enjoying a pleasant evening with friends Thursday [June 4, 2009] while fishing at Wilcox Dock.

They had been casting their lines since 6 p.m. and had caught quite a few perch, but the fish unexpectedly stopped biting around 8 p.m. [June 4, 2009].

The wind was calm, the sun was still shining above the western horizon, and Lake Champlain was as tranquil as could be.

RAPID MOVEMENT
But then, a movement out on the lake caught the angler’s attention. Something in the water was moving rapidly from left to right about 100 yards beyond the dock.

“It had to be 50 feet long, from what I could see of the humps (rising above the lake surface),” Roberts said Friday morning as he recalled the unusual sighting, still energized with excitement from the experience.

“There was no wind, no boats, no explanation whatsoever. It was so close that I could see the texture of the skin.”

His girlfriend, Randy Patnode, was nearby talking to her grandmother on her cell phone. Roberts called to her, telling her to get a picture of the creature before it moved out of sight, but her cell phone was low on power and prevented her from getting a shot.

Still, the group watched the object as it continued to move toward the peninsula just south of Wilcox Dock.

“It didn’t move like a snake,” said Roberts, owner of Adirondack Birch Worx furniture shop in Plattsburgh. “It was not like a porpoise or dolphin, either. It moved straight and fast, with its bumps up high and then down lower in the water.

“I’ve never seen anything like it before,” he added, noting that he grew up on Cumberland Head and has seen 20-foot lake sturgeon close up before.

The creature’s skin was “whale-like,” he said, and had a shiny greenish black tint to it.

DROPPED DOWN
As the object moved toward the peninsula, it suddenly dropped below the surface and did not appear again, one solitary wave slowly inching toward shore from where it had been.

Roberts said he has never really believed in the Lake Champlain monster and stopped short of saying that this was Champ. But it was definitely not something normal, he said.

“It was no log, no boat, no animal I’ve seen before. I just can’t believe it. I couldn’t sleep because of it.”

Roberts, Patnode and their friend Lincoln Collins were the only three on the southern edge of Wilcox Dock. Several other people were on the northern edge, facing Georgia-Pacific, but did not see the creature, Roberts said.

The trio continued to fish for another hour or so, but the perch that had been so abundant earlier had disappeared.

“I know one thing,” Roberts said. “I’m not swimming in this lake again.”

VERMONT SIGHTING
This is the second Champ-like sighting within the last few days. Eric Olsen, a Vermont man, posted a video on YouTube of something he had seen on the Burlington waterfront Sunday [May 31, 2009].

In that video, a blurry clip shows a swimming animal raising its head above water several times before dropping from sight.

Roberts knew about that video and said he “wasn’t trying to jump on the bandwagon” but that he and his friends definitely saw something unusual Thursday night [June 4, 2009]. 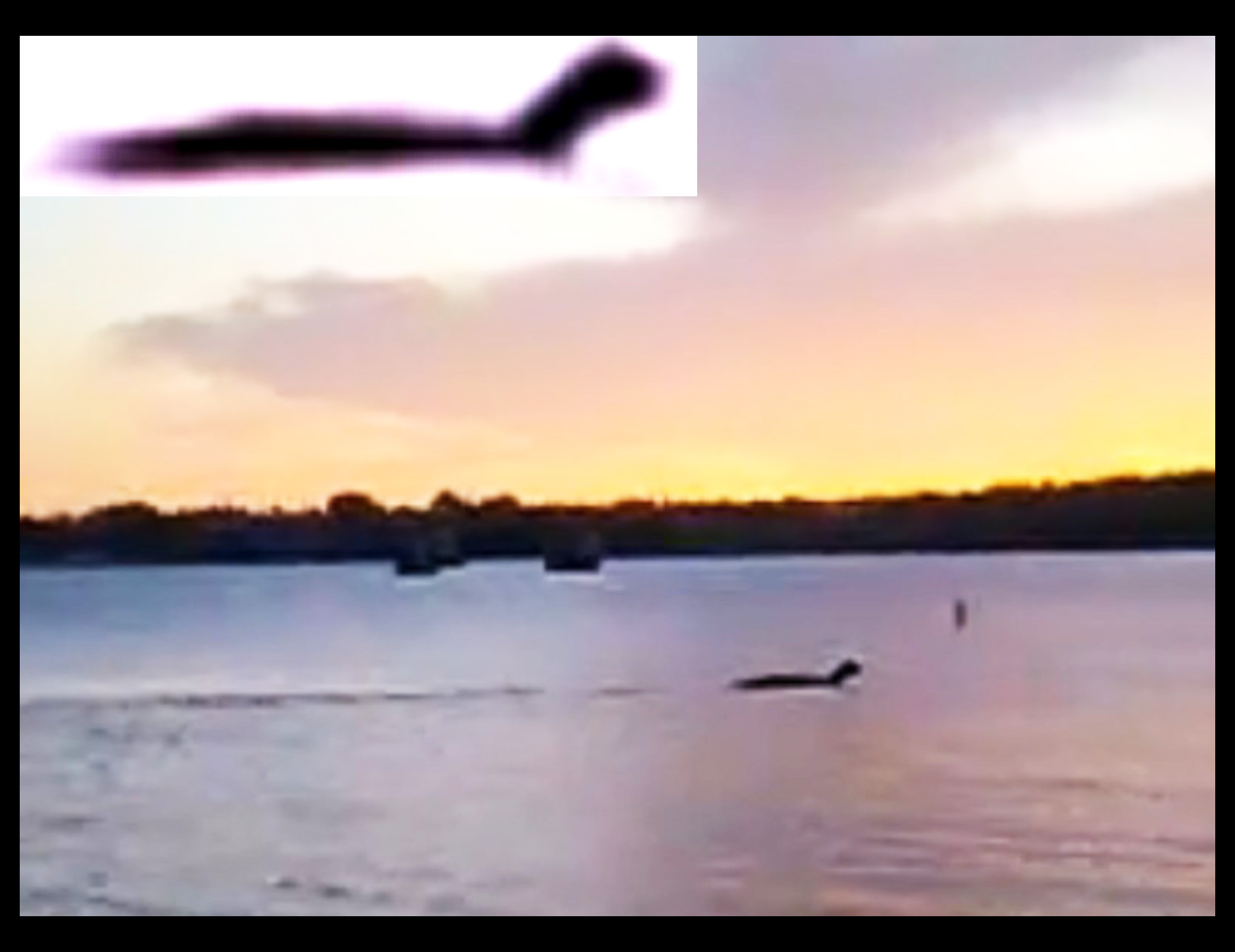 Bernard Heuvelmans’ Super-Otter (below) compared to an image from Eric Olsen’s new footage (above).