You are here: Home / Stories of the Vietnam Vets' Rock Apes

Only the occasion of Veteran’s Day, 2010, I repost this earlier offering, along with the January comments it got. It seems appropriate to have the blog talk about this topic on this day. 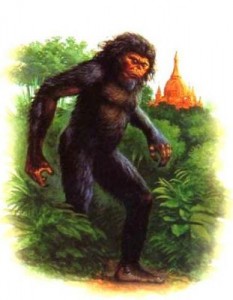 In the book, Very Crazy GI – Strange but True Stories of the Vietnam War, Vietnam War veteran Kregg P. J. Jorgenson tells of how he had an actual sighting of a short, red-haired, hairy, upright anthropoid, which he says soldiers in Vietnam called a “Rock Ape.” One even was said to be captured in Dak Lak Province in 1971, and in 1974 a North Vietnamese general, Hoang Minh Thao, requested an expedition to find evidence of the creatures, but it was unsuccessful.

Other soldiers, we are told, down through the years, have told of their own Vietnam War era encounters with these cryptids.

Incidents are to be found on the Internet, such as this one here:

All except one was light brown to reddish brown in color, and about 3 1/2 four feet  tall. One dark, almost black, male remained fighting to protect the others retreat and he was flying through the branches and rushing the men with his teeth bared. He was one very brave animal, I’ll tell you that.

When Poncho got control of himself, he told me that he had been walking back to the bunker when he noticed a bush that hadn’t been there before. He bent over to see it better and it SNORTED at him and he fired. What he had encountered was the ubiquitous Rock Ape of Vietnam. I would come to learn that they were nearly everywhere, and quite fearless. That is what we had heard near the wire that night.

Names like “Monkey Mountain” apparently referred not to local monkeys but to the Rock Apes.

What is unique about these references is that I understand them to have turned up in books that were Vietnam conflict books that had nothing to do with cryptozoology, by guys that merely recounted these stories casually, from their pasts. At one time, I heard that a few people (Australian, Vietnamese) who were actively searching out these remembrances.

There has even been speculation that they might be gigantic orangutans.

Considering that many Vietnam War vets are creeping up in their years, I wonder what the status of the rumored project is.

Where is a book compiling all these “Rock Ape,” Nguoi Rung, and/or Batutut reports?