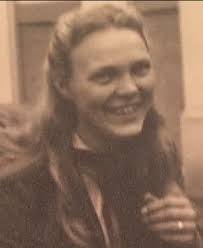 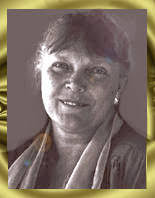 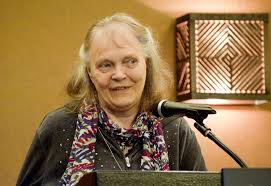 Above and below, Michael Esordi’s photos of Wanja Twan’s appearance at John Green’s 2011 tribute in Harrison Hot Springs, British Columbia. 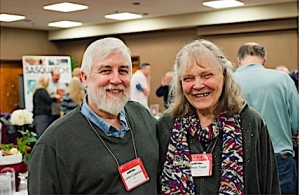 (word from her family)

We write to inform you of the death of our mother, Wanja Elisabeth Twan (Dahinden), nee Holmström, on September 3, 2019 at the Saanich Peninsula Hospital on Vancouver Island, British Columbia.  Wanja’s passing was a joyous and peaceful celebration, with family and pets by her side.

Wanja was born in Malmö Sweden, February 20, 1934, the first of three daughters to Fanny Olga Desideria Hågström and Erik Wolka Holmström.  During the second world war her parents moved her and her little sister, Ann-Charlotte, to Stockholm.  She would tell us about the children from neighboring countries arriving in Stockholm wearing rags for clothing and newspapers wrapped around their feet for shoes.  These memories stuck with her, and through the late 40′s and early 1950′s, wanting to learn the truth of the war, she hitchhiked her way around Europe. This was no small feat in those days as the war had left the European people very poor, the roads were in terrible condition, and there were hardly any vehicles to catch a ride with.  She often slept in farmers fields along the way. Her travels taught her a compassion for humanity that laid the foundation of her future.  When Wanja returned home her father asked her to become a lawyer like himself and thought they would open a law firm together.  But Wanja was an adventurer; the idea of sitting in an office day after day was not an appealing existence.  She wanted to discover the world and live life to its fullest.

Wanja met her first husband, a Swiss man named Rene Dahinden, at the employment office in Stockholm.  He was working to save money so he could travel around the world, starting with a trip to Canada. Once there, he wrote and asked her to join him.  Her sense of adventure couldn’t pass up the opportunity, and she saved enough money for her ship passage to meet up with him in British Columbia.  She spent two weeks crossing the Atlantic by ship, and then another week by train from Montreal across Canada to Vancouver.  Rene and Wanja married in 1954 in Chilliwack, BC and had two sons together, Erik and Martin Dahinden.  Wanja’s youngest sister, Kristina (aka Ametist), was born the same year as her son Erik.

Rene had heard stories of the Sasquatch when he arrived in Canada, and it became his lifelong quest to find one.  They moved to Harrison Hot Springs B.C., where many sightings had been reported.  Wanja helped Rene with his research and interviewed those people who claimed to have seen the elusive creature.  The story that stuck with her was from Mr. Ostman, who told of when he was captured for three days by a family of four sasquatch.  According to Wanja, there were just too many believable details for him to have made it all up.

Life with Rene was not easy in the remote mountain town.  He was a rugged man, and few modern amenities existed in that part of the world in the 1950’s.  A telling example of this is when he gave her a rifle as an engagement present so she could get her own food.  Her marriage to Rene came to an end when she realized that his sole focus was on his research and work.  They parted ways in 1966, but remained friends until Rene’s passing in 2001.

As a single mother, Wanja lived in Lumby, BC.  To support herself and her sons she worked at the local school as a secretary and sold her hand-woven items door-to-door.  Soon she had saved enough money to purchase a small log house.  In 1967, a man knocked on her door, and passed her a note from the neighbor.  This man was Lyle David Twan, or “Jackie” as he was commonly known, a First Nations man from the Alexandria tribe in the Chilcotin.  The note was an introduction to Jackie, explaining who he was and hinting at how compatible the two of them might be.  This approach apparently worked – Jackie Twan became Wanja’s second husband in 1968.  Jackie also had two sons from a previous marriage, Lyle and John, and together they had daughters Anneli and Kristina, making a family of eight.

In 1969 they sold the small home in Lumby and bought a larger farm in Cherryville, BC.  This became a busy time in Wanja’s life: she began writing the Cherryville News, a small, self-published paper showcasing local people and events; she ran a successful weaving school, hosting students from across North America; and she held craft fairs and workshops.  All this while tending to farm animals, gardens, and raising a family of six children.

This chapter of her life ended in divorce in 1979.  Always the adventurer, she sold the farm and moved to Kaslo, BC, with her daughters to pursue her new calling as a Reiki Master.

In 1978 Wanja met one of her most revered teachers, Hawayo Takata, at a small healing circle in Lumby. Wanja went on to earn her Masters degree in Reiki in 1979, becoming one of the original 22 Reiki Masters in North America.  Mrs. Takata passed away in 1980, and Wanja and the girls travelled to Sweden to visit her parents and sisters for Christmas.  That trip turned into five years of living in Sweden and traveling throughout Europe, India and Australia, teaching Reiki.

Wanja was often the first Reiki teacher in the numerous countries she traveled to, speaking at various Reiki events and gatherings, and creating life-long friendships around the world.

The Red House in Kaslo became Wanja’s home base between travels. She planted fruit trees and raspberry bushes, which turned into the most amazing jam every summer.  She canned Okanagan fruit on her old McClary woodstove on hot summer days to be enjoyed during the cold winter nights.  The Red House raised many grandchildren, hosted many friends, and saw quite a few cats and dogs come and go.  Almost everyone has a personal tale about the Red House.

In 2014 Wanja’s health began to decline, and she moved in with Anneli and Don at The Farm on Vancouver Island.  She witnessed the continuation of her lineage in her great-granddaughter, Rene Anneli Magwood, and spent her last years surrounded by family, friends, animals, and nature – the most important things in her life.

Wanja loved writing – she wrote five books, with a sixth one just requiring finishing touches before going to print.  She also loved animals, nature, painting, stone carving, traveling, reading, and, mostly, inspiring people to experience life to its fullest.  She believed everything happened for a reason and that her experiences were pre-determined.  Some of her memorable quotes – “Anything is possible”, “ We are always together and sometimes we meet”, and “We’ll see what happens next” – share a glimpse into her philosophy on the life she lived and loved.

In 2017, Wanja became a Status Indian due to her marriage to Jackie.  According to the Canadian Government, any woman marrying an Indian prior to 1985 became one as well.  She was a band member of ʔEsdilagh (Alexandria) First Nation, a small community located between Quesnel and Williams Lake BC.  While she has called many places home during her life, Wanja has requested this to be her final home. Her ashes will be interned at the family plot in ʔEsdilagh sometime in the future.

Wanja is predeceased by her former husbands Rene Dahinden and Lyle “Jackie” Twan, and many of her dearest friends.

Our family would like to thank the staff at the Sannich Peninsula Extended Care Unit. You gave us a beautiful, caring space for our mother’s last days, and were a gracious host to the un-ending stream of visitors and pets.

We thank our family and community in ʔEsdilagh for their acceptance and support.  We’ll be bringing our elder home soon.

We thank our friends Meenal and Sanjiv for their endless love and compassion, and we thank our friend Darlene for creating a healing place for our family to come together once again, bringing us full circle.  We are your family.

John Kirk III first informed me of Wanja Twan’s passing and then concurrently I posted the above. John also added this note: “What is missing is a mention of the small Sasquatch museum she opened in Hope, BC in the early 2000s.” 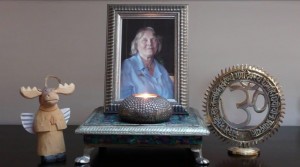