The folks at Twins Magazine tweeted this picture to promote the following story on relief pitcher Anthony Swarzak’s search for Sasquatch. (Courtesy: Minnesota Twins via Twitter)

What began as a simple curiosity about Sasquatch after watching a few television shows has turned into a bit of an obsession for Minnesota Twins reliever Anthony Swarzak — or so say his teammates.

Swarzak downplays his passion and interest in Sasquatch, otherwise known as Bigfoot. But ask those in Minnesota’s clubhouse, and they’ll tell you it’s more than just a passing fancy for the right-hander.

“He’s obsessed with it,” said fellow reliever Brian Duensing. “He believes they’re real. He really wants to find one. He is adamant that they are around.”

Indeed, Swarzak will admit that he believes Sasquatch truly exists. His fascination first began when he watched the television shows “Finding Bigfoot” and “MonsterQuest,” both of which are aimed at locating the elusive ape-like creature.

From there, Swarzak’s interest in Sasquatch has grown.

“(I’m) just watching YouTube videos here and there and reading up on different articles all over the country,” he said. “It’s just something that I kind of like, that I’m into, I guess.”

Swarzak, 26, has had a hard time convincing his teammates that Sasquatch is real. Outfielder Trevor Plouffe is the only other fellow believer in the clubhouse, Swarzak said.

“I find the information that’s out there interesting. In saying that, I have a lot of questions, and a lot of times you don’t even find answers to those questions. (Swarzak’s) kind of like my go-to guy.”

Because the rest of the Twins don’t believe in Bigfoot, Swarzak has taken some grief in the locker room for his newfound hobby.

“A lot of people give him a hard time,” Duensing said. “I remember out of nowhere in spring training, he starts talking about it. I was like, ‘Oh, all right.’ I’ve seen ‘Harry and the Hendersons.’ It could happen.”

Duensing is not a Bigfoot believer — not yet, at least — but he is curious enough to eventually accompany Swarzak on a “Squatching” mission later this year. Duensing said the two relievers are hoping to head to northern Minnesota in September, likely when the Twins have an off day, and search for Sasquatch.

“I’m the only one that won’t give him a hard time about it,” Duensing said. “And I’m kind of curious and would like to go.” 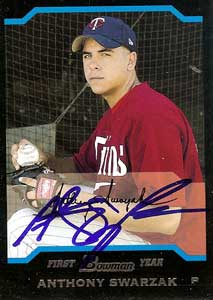 Swarzak said there’s no Squatching trip officially planned yet but added, “It’s definitely something that I would like to do.”