You are here: Home / Remembering Aaron

Ten years ago, a great friend of cryptozoology lost his son. Parents never forget. We should not either, and we honor the decade anniversary of Aaron’s passing with a moment here. 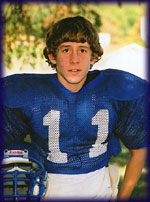 Aaron Stephen Rebsamen, 14 (born October 13, 1987), died unexpectedly on Thursday, May 23, 2002, in his Fort Smith, Arkansas home.  He was the beloved son of the well-known cryptozoology artist, William Rebsamen and his wife, Barbie.

Bill did the cover illustration of Mothman for my book, Mothman and Other Curious Encounters, which was published in January 2002.  Under a tight deadline after the publisher rejected earlier images from another source, Bill Rebsamen created the Mothman painting, overnight, in one creative inspiration.

Witnesses, such as the late Linda Scarberry (see here and here), upon seeing Rebsamen’s full-length, colored illustration of Mothman, said it was the best drawing, which most matched what was first seen on November 15, 1966.

For those who wish to visit the Rebsamens’s “Aaron Rebsamen Memorial Web Site,” please click here.