You are here: Home / This Week in History: Tom Slick Expedition

As you know, I’ve done extensive research on Tom Slick and his expeditions. For years, people forgot about his important contributions to cryptozoology. It is thus always encouraging to see the gentleman remembered in the mainstream press. 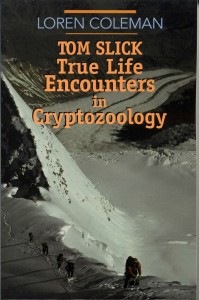 Here’s a Texas article about the man.

This Week in Texas History
by BARTEE HAILE

The Dec. 13, 1956 edition of a Dallas newspaper carried a report from Katmandu that the government of Nepal had given a Texas oilman permission to hunt the Abominable Snowman in the Himalayas.

The casual reader may have presumed the expedition was a publicity stunt by a reckless rich guy with more money than good sense. But those familiar with businessman, scientist, philanthropist and explorer Thomas Baker Slick, Jr. knew his Himalayan hike was a serious safari.

The fabulous family fortune was made by Tom, Sr., who discovered the Cushing, Oklahoma oilfield in 1912. At his death from a cerebral hemorrhage less than two decades later, the wily wildcatter was a millionaire many times over.

Tom, Jr. inherited more than a fat bank account from his rich namesake. “Dad stressed the importance of using our time, energy and money to benefit others. Perhaps he was afraid my brother and I would be playboys. I learned at an early age the responsibilities that go with wealth.”

Three years after graduating from Yale with a degree in biology, Tom the younger established the second largest privately endowed research facility in the world on 1,500 acres outside San Antonio. For 63 years, the Southwest Research Institute has blazed an impressive trail in a wide range of scientific fields.

When not tending to his many enterprises such as Slick Oil and Slick Airways, Tom took off on exotic odysseys to remote corners of the globe. His holidays were, however, sometimes harrowing.

On a flight to South America to study an aboriginal tribe, his plane went down in the trackless Amazon. Given up for lost after a week-long search, the world traveler and his entire party emerged unscathed from the dangerous jungle.

Meanwhile, the Abominable Snowman or Yeti was the subject of sensational stories in the Western press. Since the original sighting in the mid-1800s of “a hairy, tailless wildman,” tantalizing tales of the elusive creature had regularly filtered out of Nepal and Tibet.

Fueling the latest round of speculation was a second-hand report passed on by Tenzing, the Sherpa guide who had scaled Mount Everest with Sir Edmund Hillary in 1953. According to the native climber, his father once stumbled upon the legendary “missing link,” which “looked like a big monkey or ape, except that its eyes were deeply sunken and its head was pointed at the top.”

Acting on Tenzing’s tip, the Daily Mail of London sponsored a headline-generating survey of the highest mountain range in the world. The empty-handed outcome of the expensive excursion provoked this rhyme from the British humor magazine Punch: “There were fascinating footprints in the snows of Katmandu on a slightly less than super-human scale; there are numerous conjectures on the owner of the shoe and the money it has cost the Daily Mail.”

If Tom Slick feared similar public ridicule, he never let it show. He plunged ahead with elaborate preparations for the first-ever scientific effort to determine whether the Abominable Snowman was fact or fantasy.

The net result of the 1957 expedition was three sets of human-like tracks, excrement samples and several strands of hair. The highlight of a return trip the next year was the unsubstantiated claim by two Sherpas of a close encounter with a skittish Snowman. After a third trip to Nepal in 1959 yielded no more hard evidence than the previous two, the Texan gave up the costly quest.

Friends and associates hoped that Tom at last had gotten the wanderlust out of his system and would settle into the role of respectable executive. But the gypsy stopped off in San Antonio, his hometown and base of operations, just long enough to pick up a change of clothes.

The head of the science think tank voiced his concern over the restless tycoon’s high-risk lifestyle. Tom replied with a mischievous smile, “Don’t worry so much about the hopping around I do in small planes in foreign countries and in the mountains looking for the Snowman or mines or even hunting. I have a million-dollar insurance policy with the institutions as beneficiary.”

But the intrepid world traveler eventually took one chance too many. Caught in a severe storm over Montana in October 1962, he plunged to his death along with the pilot of the undersized aircraft. In an ironic coincidence, he died at 46 – exactly the same age as his father.

Tom Slick, Jr. left $12 million to three of his beloved research institutes and a trio of Lone Star colleges. Texas Christian and Texas A&M received hefty checks, as did the LBJ School of Public Affairs at the University of Texas for the pursuit of world peace.