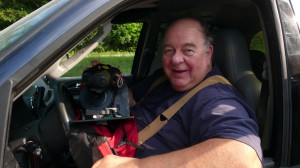 Dr. Thomas Ruh is shown with a rack thermal rig in southern Illinois, 2010, taken by Steve Moon.
Thomas Scott Ruh was born on September 7, 1937, and died on September 16, 2016. He was a member of the Bigfoot community.
Steve Moon posted the following on Facebook on September 19, 2016:

It is with a heavy heart that I must inform you that our dear friend and colleage Tom Ruh passed away on Friday evening. He had endured spinal surgery and a lot of physical rehabilitation before a heart attack finally took him. He was wearing a “Keep on Squatchin’” T-shirt when he died. He will be missed.

I have asked Tom’s friend and fellow researcher Steve Moon to say a few more words in remembrance of Dr. Ruh:

Tom and I were in the field together in northeast Iowa, the Michigan UP and in southern Illinois. I first met him in 2009, and possibly 2008.
We became collaborators in eyeglow research by 2010, with BFRO investigator Val Adams of Illinois. Tom quickly provided a physiological framework within which we could consider the phenomenon. I have color drawings that he made to illustrate the photofore cell, the light emitting cell that he felt was the best model for the mechanism of the glow that we observe in the eyes of Sasquatch.
Tom observed the phenomenon at Brush Creek Canyon in northeast Iowa. I’m sure he probably observed it at other times, but he was one of those that for whatever reason didn’t observe it often, unlike Val and I, who tend to see it a lot. We worked closely as a team trying to document the eyeglow with film cameras. Val and I have both been successful doing this, and Tom would always tell me “don’t miss an opportunity” and “make sure you take your camera!”
Tom and I spent a lot of time discussion and comparing notes, and I was hoping to eventually publish a paper with eyeglow photos, a discussion of how it allows behavior to be observed at night with a treatise by Tom showing that it is a possibility that needs to be considered. He knew from our observations that Sasquatch behavior could be observed readily at night by observing eyeglow, and analyzed over a period of time. This we recognized as one of the most incredibly interesting aspects of the eyeglow, and it was Sasquatch behavior that Val and I documented in our photographs. Val has an uncanny ability to see well in the dark, and introduced me to many different aspects of eyeglow, beginning in 2008.
Tom…was a big round beachball of a guy, and an extremely lovable character, who was sensitive and kind. No wonder everyone liked Tom! And he loved everyone right back. He was amazing.
Tom was an avid recorder of Sasquatch sounds. A few months ago he gave me most or all of his audio and research equipment. There are audio recorders, microphones of every description, pre-amps, mic stands…
He also was really big on using attractants. I received from him plastic bags full of fake flower pedals, laser projection devices, little white plastic cubes that light up, several knocking devices, and so on. At expeditions he would bring a big powerful Bluetooth speaker and broadcast wale sounds, to great affect. It would tickle him to do this. I can hear him giggle now.
He believed in gifting Sasquatch, and had a regular routine going at the family lake house in northern Missouri, of putting out melons, jars of goodies, fruits and candy. He related on several occasions the observations that he had made of Sasquatch interacting with him there. I don’t know any more than that about this research. His wife Mary may have information or documentation on that sort of thing. I will eventually ask Mary if there are any papers that Tom left behind that are relevant to our research.
I will write more later today if anything comes to mind. I really miss Tom. I knew this was coming, but it’s difficult to loose such a wonderful friend and collaborator. Tom and I talked a little about his health. He told me he’d been to his last BFRO expedition. In one of our last correspondences, if not the last, Tom asked when the Iowa episode of Finding Bigfoot was going to air. He wanted to see it, and we both knew he probably wouldn’t. One of the last things I told Tom was “You’ve disturbed the particles.” He simply wrote back “Thanks!”
Steve Moon
IOWA

I considered him a friend and mentor. I first met him on the first BFRO expedition I went to. We lost one of the most analytical minds in the field. A man of great intelligence and kind heart.
A retired professor from ST. Louis University and husband, father, grandfather , Bigfoot investigator, and above all a good friend.
I can hear him say ” So look it, I have to go and you take care my friend.”
Ron Boles

The formal obituary of Tom Ruh was published here:

He graduated from Gonzaga University (BS, PhL) and Marquette University (MS, PhD). After a post-doctoral fellowship at the University of Illinois, Urbana, he came to Washington University then St. Louis University School of Medicine for 30 years, where he was a professor of physiology and pharmacology. His life-long research interest was the study of the estrogen receptor. He was funded primarily by the National Institutes of Health and published extensively. Following his retirement, he was granted professor emeritus.

Ruh, Dr. Thomas Scott, 79, Baptized into the Hope of Christ’s Resurrection, peacefully at home on September 16, 2016, beloved husband for 48 years to Mary (nee Christiano) Ruh, cherished father of two daughters, Cynthia Cazenavette (George) and Natalie Hoemschemeyer (Kenneth) and Gramps to seven grandchildren, George, Elizabeth, Margaret, Thomas, Mary Grace, Theresa and Anna, brother of the late James Michael Ruh, our dear uncle, friend and colleague to many.
He graduated from Gonzaga University (BS, PhL) and Marquette University (MS, PhD). After a post-doctoral fellowship at the University of Illinois, Urbana, he came to Washington University then St. Louis University School of Medicine for 30 years, where he was a professor of physiology and pharmacology. His life-long research interest was the study of the estrogen receptor. He was funded primarily by the National Institutes of Health and published extensively. Following his retirement, he was granted professor emeritus. Source.

Thanks to Todd Prescott for passing along the news.