Updates: Jeff Rice’s assistant’s name is Katheryne Fuller. She was found barely alive with his lifeless body. Local officials are looking into this now as a possible cocaine overdose.  Sally Blackman does not wish to speculate on what is happening on the ground in Uganda, as long as there is an ongoing investigation. 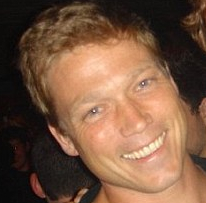 A freelance fixer, facilitator, and producer for reality television programs including Destination Truth and The Amazing Race has died in what is being reported as a bizarre poisoning by alleged African gang members on Sunday, February 19, 2012.

Jeff Rice was found dead in his hotel room in Kampala, Uganda, allegedly after an attempted robbery resulted in a suspected poisoning.  Rumors of drugs found in his room are now circulating.  Stay tuned. (Kampala is the capital of Uganda, and has a diverse population of almost 1.2 million people. Most Americans recall Uganda as the country ruled by Idi Amin from 1971 to 1979. The revitalization of the economy in the 1990s and 2000s has created a different nation, but gangs still rule some sections of the city.)

Fox News, Huffington Post, and other media in the UK and USA are reporting that Rice, the father of two (aged 7 & 2), and his production assistant, Katheryne Fuller, were poisoned following their refusal to turn over their belongings to “local thugs.”

Rice’s wife, Sally Blackman, said the woman remains in critical condition. “They were not attacked but [evidence] points towards being poisoned,” she told Fox News. “His production assistant was also discovered in a coma and has been hospitalized in Uganda. She has not shown any improvement as yet.”

The two had worked on the challenges across Africa being shown in the current CBS Season #20 of The Amazing Race. The Amazing Race’s production company, Jerry Bruckheimer Films, had “no knowledge” of the incident. CBS did not comment on Rice’s death.

Rice and the assistant were not presently working on the show at the time of the suspected poisoning, but they had helped with the current season, which hit screens on Sunday.

In 1999, Jeff Rice and his then future wife (they married in 2001) Sally Blackman founded SB Productions of Duban, SA, which produces and facilitates films, ads, documentaries and television programming. He also ran the production company Maverick Entertainment, which had employed the assistant.

Additionally, besides Destination Truth, Rice worked on Animal Planet’s Whale Wars and the South African version of The Biggest Loser. As a facilitator, Rice was hired by production companies to make arrangements with local African officials before production crews arrived for filming.

SyFy’s Destination Truth host and executive producer Josh Gates tweeted: “Floored by the loss of my dear friend and adventurer, Jeff Rice. You were, quite simply, the real deal. I’ll never forget you.”

Gates tweeted a picture of the two men, writing: “A photo with Jeff Rice in Madagascar. I can’t believe you’re gone, buddy.”

Rex Williams, from Syfy’s Destination Truth, wrote: “Lost my great friend, Jeff Rice. I can’t tell you how saddened we are. He was a true adventurer. Please keep his family in your prayers…Thank you for your kind words everyone. Such a tragic loss…”

Jael de Pardo, from Syfy’s Destination Truth and Fact or Faked Paranormal Files, wrote: “Very sad news about the tragic loss of our friend and Destination Truth colleague, Jeff Rice. I had the pleasure of working with him in Namibia. This has caught the entire team by surprise. He will be missed.”

According to the IMDb, Rice was involved in the following episodes of “Destination Truth”:

The Kalanoro from The Field Guide to Bigfoot and Other Mystery Primates (NY: Anomalist Books, 2006) was drawn by Harry Trumbore.