You are here: Home / Tools for Hoaxing 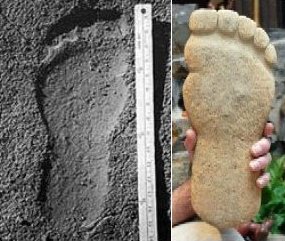 by Mark A. Hall

Two people who attached themselves to Bigfoot were Rant Mullens and Ray Wallace. Both claimed to have hoaxed tracks: Wallace to his relatives and Mullens with a public display of his carving of a foot. He tried for years to get someone to pay attention to his claims. Mullens succeeded in 1982 with a news story that gave him headlines all over America. Following up on that story, William Overend of the Los Angeles Times went to Toledo, Washington. He detailed a long-standing feud between Mullens and Wallace. [25] 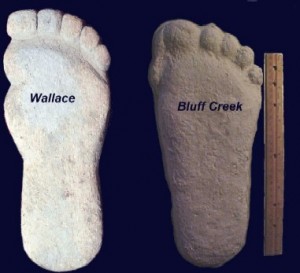 At least three types of funny feet have been turned up. None of them would be responsible for the Jerry Crew tracks. 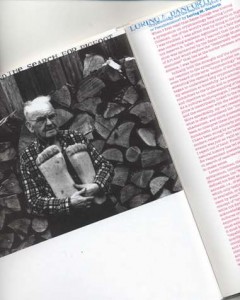 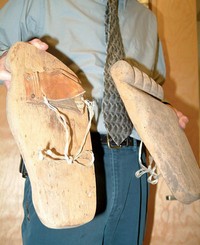 The Oregon Wallace kin display the fake feet in late 2002, which were kept by the family and claimed to be used in Ray Wallace Bigfoot pranking.

The first set. The first set looks identical to the handiwork of Rant Mullens. At the end of 2002 they were in the hands of Wallace’s Oregon relatives (directly above). [26]

Mullens claimed to have correspondence with Wallace about these feet dating to early 1958. [27] Wallace paid Mullens fifty dollars for them. They were one of a half dozen sets, according to Mullens, that he had been carving for years as tools for pranks. But Wallace was not paying good money just to play a joke. He had a practical use in mind according to one of his former employees who was still around in 2002.

According to John Auman, a 71-year-old retired logger in 2002, Wallace had a common problem in those early days. His work sites were being looted at night. He said Wallace schemed to scare off vandals by depositing tracks to frighten them away. He brought it up to Wallace and they laughed about it. But Wallace admitted nothing at the time. [28] To admit to the ruse would only ruin the effectiveness of it.

Leaving strange tracks to scare off trespassers is not an idea unique to Ray Wallace. To show how old this idea is, an example is Ranger Arthur Woody who was in charge of the Chattahoochee National Forest in Georgia in the years 1918 to 1945. To discourage poachers he deposited tracks of a huge bear paw on trails and roads. He found “that bear track was just about as effective as three game wardens.” [29]

Wallace had no illusions about the quality of Mullens’ work. William Overend of the Los Angeles Times interviewed him in 1982 about the feud between Mullens and Wallace. Wallace told him: “Those things would never fool anybody. Some of the smartest people in the world study Bigfoot and Rant’s feet are almost like square blocks.” [30]

He gave the Mullens feet to his relatives in Oregon. They have said they used them in later years. [31] 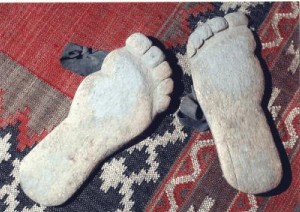 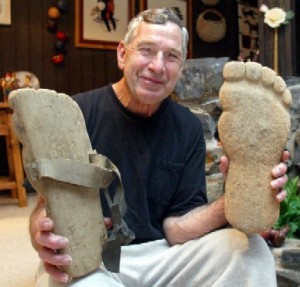 The Wallace wooden fake tools to make Bigfoot tracks; click on the image to make it bigger. (David Rubert Photography – used with permission.)

The second set. The second set (above) of false feet was displayed by Dale Lee Wallace in December of 2002. Their first appearance dates to November 2, 1958 when they turned up on a sandbar in Bluff Creek. Where did they come from?

When Jerry Crew found large footprints in August and then early October of 1958, Ray Wallace responded by hiring two men to find out who was making those tracks. He paid Ray Kerr and Leslie Breazele (identified in some accounts as Bob Breazele) to devote their time to tracking whoever or whatever was making those large footprints in the area of his construction site. This is not the action of someone who had been leaving those very same false footprints at night at his own construction sites. But it makes sense that Wallace wanted to know who else was creating a sensation at his work sites by scaring his employees.

If one accepts at face value the account presented by Elwood Baumann in Bigfoot [32], Ray Wallace and his brother Wilbur were beside themselves with anger at the nuisance that was causing their workers to quit and causing nighttime havoc by tossing tires, oil drums, and sections of culvert into ravines.

Kerr and Breazele were reported to have found tracks. Breazele had four hunting dogs that they used during nighttime vigils. Their experience on 12 October became the next big news story to follow the Crew story. They were driving along at night when something large and hairy crossed the road in their headlights. Large tracks were found at the scene. But the particulars of what they found in the way of tracks when in Wallace’s employ were not reported to the public. Their findings were naturally reported to Ray Wallace. The tracks at the scene of the sighting were simply said to resemble the Crew tracks. Their dogs also disappeared while searching for Bigfoot. Four dead dogs were later found by Curtis Mitchell. [33]

When those two hunters departed the scene, the fake tracks began to appear. On November 2nd the imprints of the crudely carved alder-wood feet appeared for the first time. They were found on a sandbar in Bluff Creek. They were used in subsequent years to make more prints along Bluff Creek. [34] They were detected to be fakes in 1960, but that knowledge was not widely shared.

The display of the foot forms in December of 2002 has removed all doubt about who was behind the making of the tracks. That was Ray Wallace and possibly some relatives. Knowing that the Mullens feet were so crude as to fool very few people, Wallace had his own feet made up. As a model he had the tracks that were found by Kerr and Breazele. In this way he put into this work exaggerated features of something that was found in the California forests.

Fortunately the shape of this wooden foot is distinctive. (See above.) Its size, squared-off toes, and exaggerated bumps on the inside of the foot make it recognizable in the many photographs that have appeared.

At the very time that Kerr and Breazele reported their sighting, Wallace was called into the Humboldt County sheriff’s office because it was rumored that he had been frightening his own workers with fakes. [35] Whether he ever actually planted false prints at his own work sites is unknown, but if he had, he was only trying to protect his equipment that was not being protected by law enforcement. But to admit this would have been to ruin the effectiveness of the ploy.

We will never be sure of the motivations that caused Ray Wallace to start leaving prints on sandbars in Bluff Creek. We are now only certain that he did. It might have been just for the fun of it. He might have been tweaking the authorities for dragging him into their offices instead of protecting his property. Or both. He might even have been getting back at the nuisance that Bigfoot had become to his work. And he might have been launching himself on a long term strategy to make money from the presence of the real Bigfoot that had just taken the world by storm in October of 1958.

Over time the fake tracks were a big success. When Wallace tried to follow up with other enterprises with a Bigfoot theme he was not successful. He told William Overend, for example, “I’ve got film of the Bigfoot you wouldn’t believe. I’ve got his screams on tape too. One of these days, one of the networks is going to want to buy this. I’ll tell you one thing right now. I think they’ll pay me $50 million for it once they see the film.” [36]

Wallace was wealthy from his businesses, so he didn’t need the money. But he clearly needed the attention. There are many stories from Ray Wallace, too many to reference them all here. 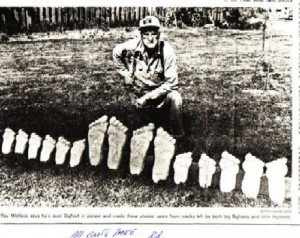 Ray Wallace was not shy about showing his fakes to some local newspapers. 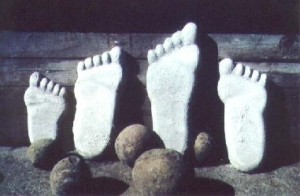 Ray Wallace made fakes in a wide variety of configurations. Part of the “Toledo Collection” photographed in the 1980s by Ron Schaffner. Used by permission.

The third set. A third set of foot forms exists. Grover Krantz noted that such 18-inch-long casts were fake and that “copies of these were widely distributed in western Washington many years ago.” [37]

There is no doubt that Wallace possessed sets of these. He was photographed for the Los Angeles Times with two sets of them in 1982. There has not been a specific admission that Wallace was behind these fakes. Whether they were actually used to make imprints to be found by others is unknown. But duplicates of these casts helped meet the demand for ownership of a Bigfoot cast. For an example see the photograph opposite page 128 in Bigfoot All Over the Country by Marian T. Place. [38]

Tomorrow – Part 6: A Trail of Tracks in Print