You are here: Home / Happy President’s Day: Bigfoot and Teddy!

Happy President’s Day! Theodore “Teddy” Roosevelt (October 27, 1858 – January 6, 1919) was the 26th President of the United States of America (1901–1909). He appears to have been the only President to be associated with any of the stories of Bigfoot in frontier America.

This image of “Teddy Roosevelt and Bigfoot” by artist Jason Heuser seems as if it was inspired by the story in The Wilderness Hunter. 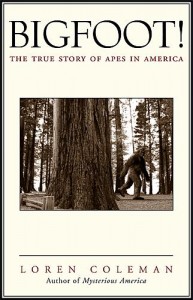 Stories of violent Bigfoot do exist. Giant cannibals in the bush eating woman are part of ancient Indian lore, although little discussed today. One of the first stories among nonnatives appears in Theodore Roosevelt’s The Wilderness Hunter, published in 1890. During the mid-1800s, two hunters, one named Baumann, were camping in the Bitterroot Mountains, on the other side of the Rockies from Yosemite, when they were visited by something that left giant footprints. Then at midnight they saw, in the fire’s light, a huge upright form and smelled it, too. 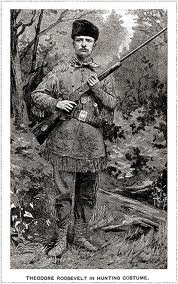 The next morning, Baumann went to check traps, while his mate packed up. When Baumann returned, he found his friend’s neck broken and four great fang marks in his throat. Roosevelt added, “The footprints of the unknown beast, printed deep in the soft soil, told the whole story . . . his monstrous assailant, which must have been lurking in the woods, waiting for a chance to catch one of the adventurers unprepared, came silently up from behind, walking with long noiseless steps and seemingly still on two legs. . . . It had not eaten the body, but apparently had romped and gamboled around it in uncouth and ferocious glee, occasionally rolling it over and over; and had then fled back into the soundless depths of the woods.”

Teddy Roosevelt’s The Wilderness Hunter story has become a mainstay of Bigfoot lore, although considered opinion nowadays is that it is only a twice-told tale that may have more to do with a rouge grizzly bear than a Sasquatch. That has not stopped the widespread reproducing of Heuser’s art and the retelling of the story.