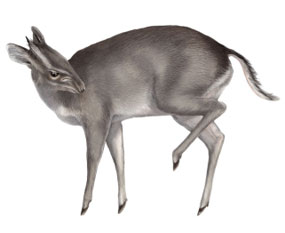 In 1821, the French naturalist and zoologist George Cuvier made what has been called his “Rash Dictum”: he remarked that it was unlikely that any large animal remained undiscovered. Many such discoveries have been made since the time of Cuvier’s statement, needless to say.

Yet another new mammal has been discovered, a new African Antelope.

From the press release comes information on this new species:

Erik Verheyen, Gontran Sonet and Zoltán T. Nagy, three scientists from the Museum [of the Royal Belgian Institute of Natural Sciences], have, with the team of international researchers they are members of, discovered a new species of antelope that occurs in Togo, Benin, and Nigeria.

It is a very small antelope, measuring no more than around 40 cm at the shoulder and weighing four to six kilograms. It belongs to the duiker subfamily of antelopes. The Afrikaans name, ‘duiker’, meaning ‘diver’, comes from the habit these timid animals have of diving into the vegetation at the slightest sign of danger.

The new species has been named Philantomba walteri, or ‘Walter’s duiker’ in homage to Erik Verheyen’s father, Professor Walter Verheyen (°1932-†2005). As professor at Antwerp University, he was the first scientist to collect a specimen of this species.

Until now only two species of antelope had been recognised within the genus Philantomba. Both are widely distributed in West and Central Africa where they are hunted extensively. Their horns are used in traditional medicine and their meat is much in demand at bushmeat markets. It was known that one of these species, namely Maxwell’s duiker (Philantomba maxwelli), showed a geographical variation between different populations. Morphological studies and DNA tests have now shown that some of these populations form a distinct species.

The scientists were able to demonstrate this on the basis of specimens bought from local hunters or found at markets. Use was also made of specimens from museum collections….

Local hunters knew of the animal for they were killed for meat and the market.

The full citation for the source paper is: