The Smithsonian announced today a brand new species called the “olinguito,” a species related to the olingo. They said it is a cross “between house cat and teddy bear” in their press release.

This is a good find, but the media madness is making much more out of this than it is. It is a small mammal that eats insects and fruit. First the word used was carnivorous. Now it is a new “Carnivore” discovery for 2013! I’d say this is going a bit overboard.

The new species was actually first found in 2006, but just described this week. It is a new procyonid (raccoon family of mammals). 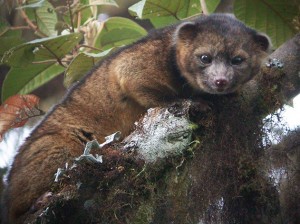 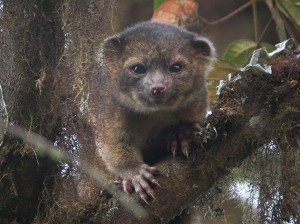 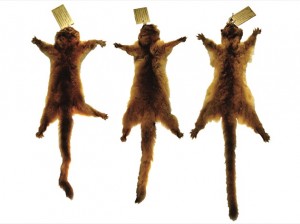 Smithsonian zoologists announced on Thursday the discovery of the first new species of “carnivore,” as they put it, found in the Western Hemisphere in 35 years — the big-eyed, furry, rust-colored olinguito.

“The discovery of the olinguito shows us that the world is not yet completely explored, its most basic secrets not yet revealed,” Kris Helgen, curator of mammals at the Smithsonian’s National Museum of Natural History, told reporters in Washington.

The olinguito, a small member of the raccoon family, lives in the treetops of the Andes Mountains.

“You have not seen an animal quite like this before,” Helgen reporters at the Smithsonian Castle in Washington.

The olinguito, or Bassaricyon neblina, is from the olingo family, a bushy-tailed tree-dwelling carnivore.

The olinguito (oh-lin-GHEE-toe) looks like a cross between a house cat
and a teddy bear. It is actually the latest scientifically documented
member of the family Procyonidae, which it shares with raccoons,
coatis, kinkajous and olingos. The 2-pound olinguito, with its large
eyes and woolly orange-brown fur, is native to the cloud forests of
Colombia and Ecuador, as its scientific name, “neblina” (Spanish for
“fog”), hints. In addition to being the latest described member of its
family, another distinction the olinguito holds is that it is the
newest species in the order Carnivora–an incredibly rare discovery in
the 21st century.

It features big eyes and orange-brown fur and weighs about two pounds. It is also a carnivore, but eats fruits such as figs as well as insects and plant nectar.

Helgen said his team discovered the animal, which is part of the raccoon family, living in the canopy of the tall trees in the mountains of Colombia and Ecuador.

He said the species “was completely overlooked by all zoologists until now.”

Helgen said his team first saw the animal in the Andes in 2006 and have been constructing its family history eversince.

“We saw olinguitos a number of times [in the wild]. …It was real, it was alive, it was in the wild,” he said.

Helgen said he was also announcing four subspecies of the olinguito. He said the animal thrives in its cloud-forest habitat and is not considered an endangered species.

The zoologist said the olinguito has been the subject of mistaken identity for years. He noted that at least one of them had been held in zoos in the U.S. several years ago, but no one realized it was a new species and not an olingo.

He said retired zookeepers have told him that the animal refused to breed or mingle with other olingos, which is why they kept sending it to various zoos around the country in hopes it would eventually mate.

The announcement Thursday coincided with the publication of the discovery in ZooKeys, a journal on biodiversity.

The first clue for Helgen that he might have stumbled upon a new species came as he went from museum to museum to figure out how many species of the olingo existed. At the Field Museum of Chicago, he realized that the reddish-orange pelts he saw there were nothing like the skins of the olingos.

Searching further, he learned that the anatomy of the skull was different — shorter snout, dissimilar teeth.

“I knew at that point it was a new species, but I also knew I needed to be sure,” Helgen said. For years, he tried to confirm that the olinguito was a new species with thorough investigation and DNA testing, fearful that another scientist would beat him to the punch.

Finally, he called upon zoologist Roland Kays of the North Carolina Museum of Natural Sciences, an expert in olingos, to help him track down a wild olinguito in its natural habitat. The researchers, along with Ecuadorian zoologist Miguel Pinto, set off on a weeks-long field expedition to the Andean cloud forests.

On their first night in the wild, they spotted one feasting on fruit high in the misty treetops.

“It sort of bounced around the trees almost like a monkey,” Kays said, “doing its thing, eating the figs.” 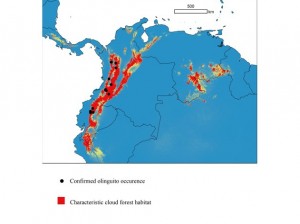 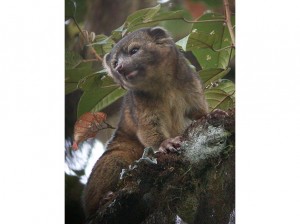