You are here: Home / What Is Namibia’s White Mystery Beast?

What Is Namibia’s White Mystery Beast?

A mysterious beast has been terrorizing Namibia, Africa villagers. Read the account below. It is remarkably short on descriptive details. But based on what is known, could it be one of the two more rarely seen animals of the area?

Could it be an aardvark, also called the antbear, or, from the Dutch, Earthpig, (Orycteropus afer)? 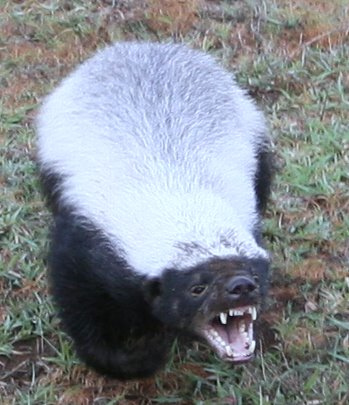 Or the aggressive honey badger (Mellivora capensis), also known as the ratel, which from certain angles looks all-white?

Namibia’s endangered species include Wild Dog, Black Rhino, Oribi and Puku. The Puku antelope is limited to about 100 individuals along the Chobe River in Botswana and the Linyati marshes in Namibia. The Black and White Rhino have suffered the most from poaching and are on the verge of extinction. If there had been no moves to save them in the last 20 years they probably would have disappeared form the wild altogether. Although both species occur naturally in Namibia, today you will find in many of the reserves that they have been reintroduced. The country also has the largest population in southern Africa of cheetah not contained within National Parks. There are over twenty species of antelope in Namibia ranging from largest, the Eland, to smallest, the Damara dik-dik. The Gemsbok, a striking antelope with long symmetrical horns and distinctive black and white markings is featured on the Namibian coat of arms. Namibia also harbours a wealth of small mammals including Mongoose, Jackal as well as the less common Antbear and Honey Badger, these are not often seen as they are solitary and nocturnal.

In the midst of all this wildlife, recently something has been bothering locals:

According to regional councillor Andreas Mundjindi, the mysterious animal was spotted late last Saturday [Feb. 18, 2012] chasing dogs and goats. Mundjindi says that the beast even almost injured a young man on Sunday afternoon on his way home.

“This is an alien animal that the people have not seen before. We don’t have a forest here and only bushes. So, this must be black magic at play”, the councillor told Informanté.

The animal is said to be white in colour with a dog-like head and pig-like backside. Locals are now only working and walking in groups whenever they go somewhere – day or night.

One resident told Informanté that the creature originated from a house of a grey haired man. “Everyone believes it is his beast and even he knows that we think so,” the source said, adding that the man would be so feared that no one dares to confront him.

The resident further says that people are puzzled that the mysterious animal only attacks dogs of some households while others are spared of the attacks.

“When it comes our side in the night, all the dogs are barking, but if it goes back west, then it’s all hush. People must be safe. We don’t want to be mauled by things we don’t know,” he fumed.

A teacher acknowledged that even his learners are talking about the alien animal. “Wether it’s true or not, I don’t know. Wambos are just like Caprivians. They like magic too much,” says the geography teacher. Unknown animals have been regularly spotted in the north over the past years, most notably at Okaku village. There residents accused a certain family of keeping strange animals as pets. The family successfully sued the Ministry of Safety and Security when police searched their house. Nothing was found.

The Uukwiyu Uushona councillor pleads with the owner of the unknown beast to remove it from the open before it causes injuries. “Alikana tukwateni nawa iinima yetu nokuyipa yilye yo kaayi tu fadhukiipo”  translating into “please let’s keep our things safe and feed them, so that they don’t run out into the open.”

Some of northern tribes are said to believe that keeping strange animals in their houses would bring luck, protection and wealth. Marx Itamalo, 22 February 2012

Namibia, officially the Republic of Namibia (Afrikaans: Republiek van Namibië, German: Republik Namibia), is a country in southern Africa whose western border is the Atlantic Ocean. It shares land borders with Angola and Zambia to the north, Botswana to the east and South Africa to the south and east.