One of the missions of the International Cryptozoology Museum is to rescue and rehabilitate replicas, artifacts, and scientifically significant articles of importance to the history of cryptozoology.

One such item that I have been interested in learning more about and preserving is a giant head of a Bigfoot, rumored to be a Gigantopithecus representation, which many of you have seen at conferences on the West Coast and/or in Texas.

Here is one of the few photographs of it you can find on the Internet.

Ken Gerhard with the head, in Texas. Photo by Duncan Hopkins.

Joedy Cook with the Krantz Gigantopithecus skull reconstruction with the head. 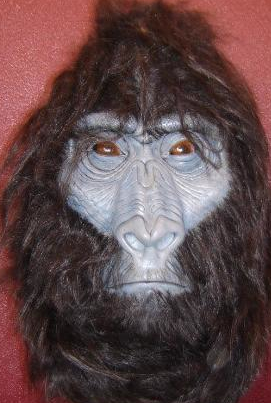 This head was in the possession of Texas Bigfoot researcher Craig Woolheater, after it was sent to him by its creator, and was displayed at some Texas Bigfoot conferences (above and below).

The item was actually created in 1999, by Hollywood model maker Lee Murphy, the author of Where Legends Roam and other cryptofiction works. Murphy informed me the head is his imagined view of that of a Sasquatch, based upon a scaling up of the complete head of a gorilla, imagined in a more bipedal positioning.

The journey of the head from Murphy to Woolheater to the Loren Coleman collection for display in the International Cryptozoology Museum is an intriguing one.

After its use at Texas conferences during the first decade of the 21st century, Lee Murphy’s “Sasquatch Head” has fallen into a series of moves and some minor neglect. The hair has become matted, filled with leaf litter, and tangled.

When discovered on October 20, 2012, it was suggested by Craig Woolheater, and happily endorsed by Lee Murphy, that it come into my collection for permanent exhibition at the International Cryptozoology Museum in Portland, Maine.

On October 23, 2012, the Sasquatch head began its long journey from Texas to Maine.

From a windy day through delivery during the middle of Hurricane Sandy in Maine, bringing the head of Bigfoot to New England was a relatively easy task thanks to the helpful fine folks at The UPS Store #4284 in suburban Fort Worth-Dallas, Texas.

Newly arrived in Maine. There’s work to be done on properly curating it at the ICM.

From discussions with Lee and the following photograph showing the appearance of the head when it was first created, we feel we can assist it regaining some of its former glow.

Therefore, the International Cryptozoology Museum is now sharing another important Bigfoot replica through its exhibitions. Come view this newest addition to the museum for the first time during our special Halloween events, on Wednesday, October 31, 2012, the first anniversary of our larger, new location, at 11 Avon Street, Portland, Maine.