You are here: Home / News On Mokele-Mbembe Research

William Gibbons exclusively shares with Cryptomundo his insights and clarifications on some of the details on he and his associates’ reseach and subsequent findings on Mokele-mbembe and the N’goubou:

There have been a handful of Western eye-witnesses who have observed these animals since the 1950. That is, witnesses that we know of. They include a Knight of the Realm, a British Aristocratic big game hunter, two British engineers and two big game hunters (one South African and the other French). Given the remoteness of the areas in Equatorial Africa where the animals are reputed to live, including the natural hostility of the area, such a venomous reptiles, disease carrying insects and othe hazards, it is very difficult to remain in such a location for very long.

The native eye-witnesses that have observed Mokele-mbembes and other strange or unverified animals possess no televisions, radios, books, magazines and are otherwise illiterate, apart from the view who attend state public schools, which are little more than empty brick building with a blackboard and a few tattered French language textbooks. None on dinosaurs or other forms of “pre-history”, I should mention. The pygmies in particular, who are the most knowledgeable on the local flora & fauna, spend their lives within their communal villages, venturing out into the rivers and forests to hunt, fish, and gather various herbs and edible plants. It is during these extended periods of time (sometimes several weeks), that they observe animals that they later describe to us upon enquiry. other eye-witnesses include, military personnel, river boat officers and government officials who are posted to the more remote villages on the river system. We have made a point of venturing into more remote areas on the river where we have sought out first-hand eye-witnesses, especially those who have never been questioned by outsiders before on La’Kila-bembe and other animals that are currently unverified by zoology. They are not paid or rewarded for their information, and are often puzzled by our desire to locate and observe these animals. Mokele-mbembes/La’Kila-bembes are a problem they could do without – they do not like these animals and avoid them at all costs.

The eye-witnesses who describe Mokele-mbembes to us are subjected to a picture test, which includes images of North American animals such as the bear, the moose and the beaver. All of these animals are unkown to our informants and always draw a blank. We then show them images of well known African animals, such as the gorilla, chimpanzee, elephant, hippos, crocodile, and the giraffe. The Baka people recognise all of them with the exception of the giraffe, which occurs only in the northern tip of Cameroon on the border with Nigeria, an area where the Baka do not frequent. We then showed them pictures of some extinct animals, such as the T-rex, Stegosaurus, various Pteranodons and the Triceratops. Almost all of these drew a blank, except the Triceratops which bore a VAGUE resemblance to a horned animal that lives in the savannah area between Cameroon and the Central African Republic, and was reputed to attack and disembowel elephants.

When we ask them to draw a La’Kila-bembe on the ground (as the animal is known in southern Cameroon), almost all first hand eyewitnesses drew a distinctive sauropod-like image. When we then showed the Baka various images of different sauropod dinosaurs. The Brachiosaurus and the Diplodocus were instantly picked out for two reasons. The Diplodocus had a long neck and tail like a La’Kila-bembe, but the Brachiosaurus image revealed dermal spikes, which the La’Kila-bembe also possesses. The image from Roy Mackals Book of a “pygmy” sauropod was rejected by our informants as it was “too small” to be a La-Kila-bembe, but more in keeping with the size of a juvenile specimen. these have been observed with a protective adult on at least two occasion in the Dja River.

To answer those skeptics who claim that Mokele-mbembe is a mythical animal, it is obvious that they have never set foot in Africa. If this animal was a mythical reconstruction, it would be confined to one particular cultural group. Similar animals have been reported by a dozen different ethnic and cultural groups throughout the Congo Basin countries. They all have different names for them, but the descriptions remain almost exactly the same. These details will be covered in detail in my new book, which lists no less that 15 different tribal names for these animals.

Here is what we know about the mysterious La’Kila-bembe so far: the mature specimens possess armoured skin, not unlike a crocodile, its size ranges from between a hippo and an elephant, its diet is entirely vegetable, it possesses a small head, rather very similar to a python (the nostrils are placed on the front of the snout), its neck is very long and thin and held high. The tail is also long and thin. It can also hide underwater like a hippo, but it is extremely hostile towards elephants, hippos and unwary canoes approaching them. The caves we discovered in the Dja were supposedly used by the animals to repose during the dry season. The females also construct large nests in the swamps where they rear their young. Those eye witnesses who have observed the animals mating state that the male of the species possess dermal frills but have a shorter neck than the females, who do not possess dermal frills. This is clear reference to sexual dimorphism within a species.

Regarding the live birth theory, this is all that it is at present – mere speculation. However, live births among certain lizards, skinks and constricting snakes is well documented. Paleontology has thus far revealed that almost all known species of sauropod were egg layers. Paleontologist Robert Bakker has argued that the large pelvic canals found in sauropods may argue in favor of live births. Some modern viviparous reptiles do give birth to live young, such as certain skinks, Jacksons Chameleon, all boas, vipers, and garter snakes. In the case of Reptile viviparity, the eggs are retained in the maternal oviducts and hatch in uterus before birth, but whether or not this is the case with Mokele-mbembe remains a mystery. If Mokele-mbembe is an egg layer, then these could be consumed by large monitor lizards and the python, and the surviving offspring may still be vulnerable to large predators such as the Nile crocodile. This may account for the apparent rarity of juvenile specimens that successfully grow to maturity The information on live mokele-births has come from a few Baka hunters who have seen female La’Kila-bembes with one young calf, but only very rarely. The 20 year reproduction gap for the La’Kila-bembe is of course a mere theory at this point, but not completely unknown in the world of reptiles. The Tuatara of New Zealand belongs to the ancient order of Sphenodontia and reproduce very slowly, taking ten years to reach sexual maturity. La’Kila-mbembes may be in the same boat (if it too belongs to a relic species), but the absence or rarity of offspring maybe due to them falling prey to large crcodiles, or is perhaps an indication that the animals, whatever they are, are now nearing their eventual exctinction. We hope that this is not the case.

In conclusion all we can say with certainty is, that the Mokele-mbembe/La’Kila-bembe’s are undoubtedly living but very rare semi-aquatic animals, the description of which do not correspond with any known living animal within the current repertoire of contemporary zoology. Each expedition brings us closer to our prey. Hopefully, we will have something more concrete for you in November 2010.

“MonsterQuest” broadcast their new program on Mokele-mbembe on June 24th, 2009. Below is a photo of one of the guides during the MQ expedition. 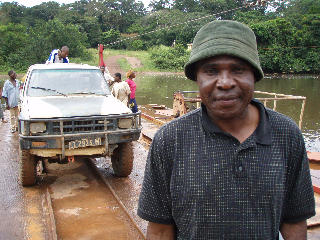 Roy Mackal, shown above in the Congo, in search of Mokele-mbembe, during one of the modern classic expeditions covered by the original “In Search Of” television series.

Mokele-mbembe with hippo art, at top, courtesy of Bill Rebsamen. Click on illustration for a larger view.

Regarding the Ngoubou/Emela-ntouka, it would not suprise me if this animal was a rhino of some kind – perhaps even a new species. The game wardens in South Africa’s Kruger National Park have witnessed some epic battles between rhinos and elephants when the two encounter one another at water holes. The elephants however, always win. Perhaps the Ngoubous are faring better against the smaller less aggressive forest elephants in Congo and Cameroon. The savannah dwelling Ngoubous are described as being heavily armored, with a beaked mouth, up to six horns (or spikes) protruding from is head/neck area, and a thin tail like an elephant. The animal is also said to give birth to a single calf. All these factors tell me that the savannah Ngoubou is most likely a mammal of some kind, and possibly a very rare species of aggressive, armoured rhino. An unusual rhino perhaps, but a rhino just the same. It would nevertheless make a fascinating discovery, considering that they are shot for food from time to time.

The river N’Goubous are described as possessing from one to two horns (again, sexual dimorphism?)and can hide under water like a hippo. A two horned specimen was trapped and killed in a Baka elephant trap as it exited the Boumba River in 1996. We are now setting up a reward system for the Baka for any physical evidence they can keep for us, such as a horn, piece of bone, skin or a tooth. Indeed, anything that can yield DNA evidence.

Finally, I should mention that any discovery of a living dinosaur will not, in my opinion, prove the Bible to be a handbook on living dinosaurs, prove that the earth is 6,000 years old, or disprove evolution. The discovery of a living dinosaur will be absolutely monumentous, and I hope a huge leap forward for science in studying and learning more about these fascinating animals. I hope that my forthcoming new book on Mokele-mbembe will help to clarify this subject somewhat for all interest parties, regardless of where they stand on the question of origins.