The following is a revised and updated version of what I first posted on December 10th. 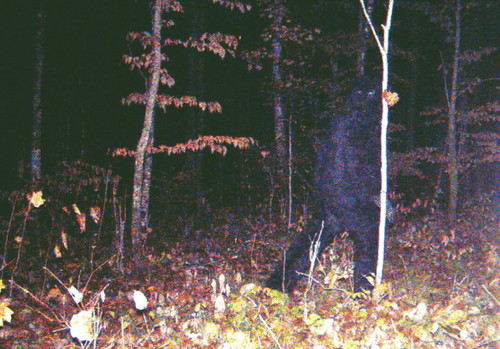 The above alleged Bigfoot was taken taken at 7:20 pm, on October 24, 2009, on a rainy night, by a game trail camera in woods north of Remer, Minnesota, according to the hunters who set up the camera.

I am clarifying this posting to indicate by a change in the title and the following text, my sense of this image.

Clearly, for those that read this blog often, you understood that I often upload obviously new, media-breaking images (such as the above) so you may enjoy yourself, through keen eyes, critical thinking, and the skepticism that is part of cryptozoology, by taking a mediated reading of them. Those who took my media course for 23 semesters in my documentary film class learned this was a technique I often utilized to teach how to do it. Giving all the answers does not assist people in learning to use their own notions, instincts, and knowledge to overturn future hoaxes and fakes.

From the beginning, of course, I also placed within this posting the embedded credits for the locations of two early sources for this photo ~ which was shared with the media courtesy of the hunters who may have themselves been hoaxed or who may be part of the hoax. The criticism that I did not do that are, well, to put it mildly baseless.

The primary source was editor Molly Miron’s The Bemidji Pioneer, who first reported this week that hunters near there captured a Bigfoot in photographs in the woods. Tim Kedrowski had told the paper that he and his sons, Peter and Casey, got a photo of a Bigfoot-like creature on a game trail camera set up on their hunting land. (I am sorry if some people are too lazy to realize that clicking “reported” takes them to the source, rather standard practice in blog journalism.)

I was first alerted to this story via The Grand Forks Herald, which published “Northern Minnesota deer hunters say they caught Bigfoot on camera,” which I also linked to in my first posting on this.

I copied and posted the Grand Forks story, again with the credit (even if some missed it) here hurriedly overnight (early am Dec. 10), when I found the contents had disappeared from the source due to them throwing up a registration barrier. My apologies for that sloppiness, which I duly acknowledge, but I did not wish to have those details lost from a public that should know what was behind this obviously faked Bigfoot. We’ve seen that happen too often in the past. I have now noticed that some web mirror sites for the full article have been published, and I have removed the article.

Here is the photo, as freely shared by the Kedrowski family:

The Northern Minnesota Bigfoot Research Team of Don Sherman and Bob Olson are now involved with the case, trying to assess if there is any evidence of any kind of huge, hairy hominoid’s presence in the area where the trailcam image was captured. Or even what trickster might have been behind this media melodrama.

I have retained the comments, below, which have evolved into a heated debate about Bigfoot evidence, in general.