You are here: Home / The Minaret Skull

I only just learned recently about what is apparently one of the more famous Bigfoot artifacts:  the Minaret Skull.  When skeptics ask, “Where are the bones?” the Minaret answer is:  ”Well, this might be one.  But who knows?”  Right now, nobody does.

A friend with a similar interest in Sasquatch raised the topic in a recent email; he’d heard of it and presumed I had.  (Whoops.)  He referred me to a YouTube video of the finder of the skull discussing the incident.  Well, heh heh.  I’d definitely managed to avoid this little tidbit, and when it comes to this topic I haven’t avoided too much.  But the YouTube video and my subsequent reading sure have gotten me thinking about something, in a way that single pieces of cryptid evidence normally don’t.  It’s volume and consistency that get my attention, not Just One Thing that might, or might not, be authentic.  This is just one single piece – if, that is, it exists; what reason have we to doubt that? – of evidence.  But what this one single piece of evidence, that might or might not be something, has gotten me thinking about is:

Just how many single pieces of cryptid evidence are there, that could amount to virtual proof were they exhumed and examined, sitting in just how many places in our very own species’s clutches…that nobody knows about?

In  August of 1965, Dr. Robert W. Denton, a retired physician, was on a solo backpacking trip on the North Fork of the San Joaquin River in the Sierra Nevada of central California.  He came to a river crossing, where he found a Mexican farm worker trying to coax a stuck mule out of a bog near the riverbank.  A kick by the mule dislodged something from the bank.  The Mexican called Denton’s attention to it; the doctor picked it up.  Denton’s examination of the object revealed a skull, the top of one at any rate.  Given that who knows what any skull might be, and this one looked as if it might be human, Denton decided to take it home and find out what it was.

It turned out that it might not be human after all.  Dr. Gerald K. Ridge, a pathologist to whom Denton took the skull for identification, said that he believed that the specimen, a calvarium (the top and rear of the skull), belonged to “some anthropoid species other than human.”  He referred to size and specific skull characters more common to apes than to us. 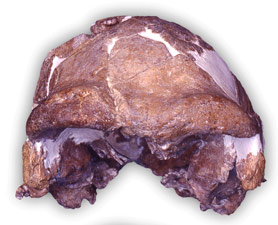 Well, one would think, this is where the plot thickens.  But what went on from here is a story that most of us who are fairly read up on the efforts to confirm this animal have heard too many times.  Ridge, wanting a second opinion, sent the skull to the University of California at Los Angeles (UCLA) anthropology department.  Two physical anthropologists – this was right up their technical alley – reviewed the specimen; agreed that they had never seen anything quite like it…and pretty much immediately concluded that the specimen was from “a young, ancient Indian male.”  Which immediately tipped off that they had indeed seen much like it, at least if they were right, because they identified it as a Homo sapiens skull.  Moreover, the calvarium is useless in making a judgment like this; race can only be deduced from facial bones and teeth, which weren’t attached to the specimen.

So exactly what prompted the two anthropologists’ difference of opinion from Dr. Ridge?  It appears that we are never going to know.  To make a long story short:  the calvarium disappeared.  It has not turned up since.  It may possibly be in the UCLA collection, somewhere.  But where can only be determined by a concerted search through an enormous stack of paper catalogs…that provide nothing but a long series of chronologically arranged ID numbers.  No notes; no descriptions.  And now one has to go through all those boxes and find the right one.  This sounds about as easy as, well, duplicating the Patterson-Gimlin film.  And no one has done that yet, either.

A more detailed write-up is here.

The YouTube video of Dr. Denton describing his find is here.  There isn’t unfortunately anything about the skull’s fate (in fact, he doesn’t even address its leaving his hands):

And this link talks about the general topic of lost bones a little more.  There’s some entertainment, and more than a little food for thought.

The easy rejoinder, of course, is:  where is the proof that this happened?  There is none.  But Dr. Denton doesn’t sound or look like the kind of person who would make this up.  Several people’s stories intersect and check out.  And if one is going to make something up, why not a suit hoax?  They’re easier.

I have long wondered whether somebody hasn’t found Sasquatch bones somewhere.  Actually, I’m pretty sure it has happened, more than once, if the animal is real; and there are as one would expect a number of stories.  Where’s the proof?  Well, the sasquatch would be proven if we had the proof.

But there’s more than a single piece of evidence that the skeptical rejoinder “Where are the bones?” may be a slight bit disingenuous, to say the least.  It’s a nice Catch-22 to demand proof when the proof tends to get thrown away by people who Know There’s No Such Thing.  But evidence doesn’t have to be proof to have power; and the stories alone are evidence.

What do you think?