Thanks to Jerry and Loren for the comments on my edition of Monstres des lacs du Québec: mythes et troublantes réalités (1982) by Michel Meurger and Claude Gagnon. Apologies for the lateness of this response but I’m slowing up with age and needed to get my thoughts in order. Jerry and Loren have spoken honestly of their problems with my 1988 edition of Meurger’s book. I do feel however that they are mistaken about Meurger’s intent. I don’t know if this response will change their minds, but in the absence of any statement from me or Meurger they could be forgiven for continuing in their opinion. In a reciprocal spirit of friendship, let me explain…

I’m not sure how I first came across Monstres des lacs, but I recognised that it was a valuable discussion for Forteans that was not generally accessible to an English-only readership. I had corresponded with Meurger for some time after I had a fairly standard article on Fort and Forteanism in a French sciencefiction culture magazine. (I can’t remember the title right now, but the editer/publisher was a mutual Parisian acquaintance Stan Barets, who was involved with Métal Hurlant.)

With Meurger’s help, I tracked down the publisher of Monstres des lacs – Stanké – a publisher of greeting cards and the like. He said that the book had not sold well and he it simply wasn’t worth him printing any more to improved on its poor distribution, never mind publishing a translation. In fact he was pleased to hear of my interest and proceeded to offer me a translation made by his girlfriend. I made an offer – it was way below what he wished for – and when I stood firm he suddenly agreed to sell the rights. (I remember his vocal-shrug of “C’est la guerre!”)

I copied the manuscript to Meurger in Paris, who reacted in horror, aghast at the mangling of the folkloric and philosophical arguments and plain wrong translations; (eg. one passage she had rendered as “the original inhabitants” of an island in the St Lawrence River had mistaken the French original meaning ‘moose’).

Meurger came over to stay with me in London to re-work the translation until it was done to his satisfaction. It was very important to us to keep the witness survey of Canadian lakes as intact and as authentic as possible. As Meurger explains in his preface to my edition, Gagnon wrote up their inquiries on Lakes Maskinongé, Remi, Simon and Placid (pages 49-55), Meurger himself writing up the rest.

However, they differed over the interpretation of the survey results. Where Gagnon is more engaged with finding evidence of cryptozoological objectivity in the narratives, Meurger was inspired by the subjective structure of the narratives and the way they were told. In the original edition, Chapter 5 set out Gagnon’s interpretation, while Meurger’s filled the remainder.

As we worked on the new translation, it was clear that Meurger had developed his ideas much further – after all six years or more had passed since the original work. Many of the changes to his interpretive chapters were extensive, in most instances backed up by a wealth of new material from academic and historical sources. Watching Meurger in full creative flow was utterly impressive and here he was, offering me a set of additions which would enhance the thesis and make it generally more valuable to Forteans.

Meurger returned to Paris and began a flow of manuscripts to me. Several times, while writing additional material, he decided to recast the whole chapter. A conventional publishing house might have, most probably, balked when an author massively revises his material in content and extent during the editing and even layout stages. I don’t know what else transpired between him and Gagnon, but I agreed with Meurger that Gagnon’s chapter – which according to Michel’s preface “was largely the text of a lecture [..] delivered to a conference at the University of Québec at Trois-Rivières” contributed least to the volume and would be dropped to make room. Perhaps more than 90% of it was Meurger’s output now, but we kept Gagnon’s name on the cover to acknowledge his valuable contribution to the practical survey in Chapter 1.

In any case the book was now way over budget. I had to remind myself that I may never again be present at an act of creation of this intensity; and that all the new material, subjected to a scholarly analysis with historical depth and folkloric width – all of this with wonderful new pictures as well – focussed upon subject matter to delight any Fortean will make it a rare book in our field. Even though we were up against space and cost limits, I had to publish it. And so I did, as the retitled Lake Monster Traditions: A Cross-cultural Analysis (1988).

Given the fact that the text was so thoroughly re-written I’m not surprised readers who compare it to the French original might detect “a shift in tone”. They were two different books; however, the underlying thesis was exactly the same, only now strengthened with more extensive and solid scholarship. If my LMT had not appeared, we might not have had the wonderful introduction based upon Scandinavian monster water lore; or the expanded chapters on Amerindian river monster lore; or the masterful synthesis in the concluding essay showing how lake monster forms a cultural bridge between (as Fort might have put it) the universal and the local. Again, we might not have had his critical essays with well-researched historical examples (added here as appendices) on medieval attempts to classify ‘monsters’, on Samuel de Champlain’s original sighting, on the alligator sightings in Mephremagog, the bizarre Chilean water monsters, and further explanation of his idea of the ‘mythical landscape’.

Loren describes the French original as having “passion and joy”; for me (as admittedly I’m biased) that “passion and joy” still shines out of LMT, only there is more it as Meurger hunts the mythological beasts across parchment landscapes forested with letters and shady woodcuts instead of the dark pine forests among the thousand islands of the Canadian south-east.

When Jerry writes: “My impression of LMT was that it was at heart just another debunking book, though more thoroughly researched than most. Alas, also more pretentious than most.” I have to ask whether you actually read Meurger’s arguments through to their conclusion, Jerry, and in what sense you thought it pretentious? It is true that I left in words like ‘facticity’ and ‘scientification’, because as editor, I was having a hard time finding reasonable substitutes. I left those (and others) in because the overall tone was that of an academic paper on folklore, anthropology and cultural psychology, which have ‘normalised’ such usage. After all, LMT was not intended as a popular mass-market paperback but as a scholarly study that might actually (gasp!) stretch its readers a bit. In any case, I felt reasonably sure that such terminology not only preserved the academic tone, but was decipherable from the context.

When Loren repeats Jerry’s assertion, describing the book as full of “debunking theories about folklore being the root of most cryptozoology”, I have difficulty in believing we are talking about the same book. Meurger is perfectly aware that unknown or unfamiliar animals are discovered, and that glimpses of them can be found in the experiences of local folk; indeed the lake survey in Chapter 1 demonstrates that Meurger and Gagnon, separately and together, conducted a proper witness survey to establish both facts and testimony. It was their interpretations that differed and this was well flagged in the French original. How could that difference have been a surprise in LMT?

For Gagnon, yes, there was always the hope that a witness might have seen, or been startled by, a genuine cryptozoological specimen. From Meurger’s point of view – as a folklorist, not a cryptozoologist – it seemed immaterial whether the witness was startled by a crypto-creature or something quite natural but unexpected (like the simulacrum of a monster in the shape of an old rotting tree trunk). He certainly did not back-engineer his thesis to dismiss or debunk cryptids as folklore.

For Meurger the witness’ imaginative state, at the moment of witnessing or of being startled, was of critical interest, for it was in that moment that perceptions and interpretations of them would be largely shaped by cultural and received imagery. While Gagnon and other cryptozoologists go off to investigate what made that splash (etc), Meurger was following the muddy tracks of cultural imagery in the other direction, from the local to the universal. This trail begins with the witness’ own internalization of what he has just experienced; another version forms in the first telling to other people; these folk then tell another version to others; then, at some stage, it is picked up by news media and retold again. At each stage, according to Meurger’s thesis, more and different cultural imagery is employed to narrate the event to others, and much (if not most) of this imagery derived from cultural traditions whether these be old folk tales about monsters or memories of scenes from modern movies or TV. It is not surprising therefore that we have differences of opinion on this; there is certainly room for both. They are both valid in their own directions, but it is an error to judge one by the ways of the other.

In this regard, when Loren says that LMT “became the book that many would point to for years saying that most cryptids were more folkloric than physical,” he is correct, but I feel sure that this only the case if LMT is read purely as a cryptozoological book. What I saw in this project – what urged me to make an edition for a wider public – was that Meurger’s thesis was so much more. We have a wealth of material on straightforward cryptozoology, but we have so few studies and even fewer scholars capable of illuminating the other phenomena that radiate out from a ‘monster’ encounter.

There is an influential opinion that the terms like ‘myth’, ‘mythological’ etc imply a negative connotation in the sense of something ‘untrue’ and therefore illusory at best and deceitful at worst. From the point of view of sociologists, anthropologists and psychologists, subjective ‘truisms’ can have immense power and extensive effect even where they intrude into everyday reality – one only has to think of the far-reaching consequences of dreams or religious faith – and in this case Meurger is trying to illuminate the ‘meaningfulness’ of narratives about encountering mysterious ‘creatures’ in the imaginative world he calls the ‘mythic landscape’.

Even if you don’t agree with Meurger’s conclusions, his work is a fine example of historical research, rhetorical analysis, and considered opinion applied to a major topic of Fortean cryptozoological interest. 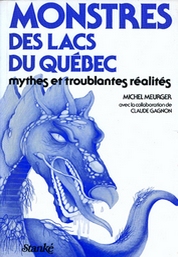