Today, a break from other things, to enjoy a guest column. A reader shares a roundup of Merbeing stories, found after reading about similar stories at Cryptomundo. 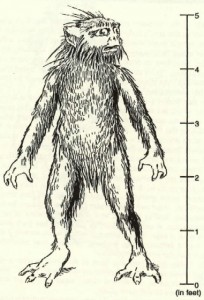 Had you ever heard of the Maymaygwayshi?

They are a type of merfolk of the Objiwa and Cree folklore, often described as child-like mermen. According to the Cree Indians, they are 3 feet tall elfish, round-headed, six-fingered tricksters. While some sources claim the Maymaygwayshi live in rapids and cascades, others affirm these creatures dwell behind rock faces by the water, especially those where cracks or shallow caves suggest an entrance. According to some natives, they have faces covered with fur, while others claim they lack noses.

There’s a Westerner account of an encounter with one. On May 3, 1782, Venant Saint-Germain was heading west to Fort Kaministikwia (today Thunder Bay), at the Western end of the Lake Superior, travelling on a canoe crewed by three men and an old woman of the Ojibwa nation. That evening the team camped in Pie Island and Saint-Germain decided to go fishing.

In the twilight, when he was returning to the bivouac, he spotted an unknown creature swimming in the lake, 150 or 200 feet away. The being had a chest similar to an eight year old child’s, brownish skin, short woolly hair (which Saint-Germain compared with the one of a “young Black”) and “extremely brilliant eyes.” It kept half of its body out of the water, with one arm raised and the other pressed on its hip, a posture traditionally attributed to the Maymaygwashi. The lower part of its body, although immersed, appeared to be fish-like. Saint-Germain called his companions —who managed to see the creature— and then ran to seek his rifle, but when he pointed the weapon towards the creature, he was intercepted by the Amerindian woman, who prevented him from aiming.

The being plunged slowly not to reappear. Then, the woman sharply reprimanded Saint-Germain for wanting to shoot the “god from water and the lakes,” the Manitoban Niba Nabais. She predicted that the creature would send a storm to them, an event that did not fail to occur. That evening, around eleven o’clock, a storm started which was soon of such intensity that the travellers were forced to draw their boat on a bank and take refuge on the heights of the island. The storm lasted three days, immobilizing them.

According to Saint-Germain, another traveller claimed that a similar creature had already been spotted close to the Pâté island, the place of residence of the Manitoban Niba Nabais, according to Ojibwas.

What’s interesting about the Maymaygwayshi, is that the North Minnesota Ojibwas strongly linked them with the Memegwicios, short hairy inhabitants of the Badlands, a fact that could imply we are dealing with something that strongly resembles a primate.

[The Memegwicios are mentioned in Mysterious America: The Ultimate Guide to the Nation's Weirdest Wonders, Strangest Spots, and Creepiest Creatures. in conjunction with the Dover Demon sightings. ~ Loren]

Now, reading your post about a dolphin-tailed mermaid reported in the Red Sea in 1805, I remembered the Henry Hudson account. Two of his crew members – Thomas Hilles and Robert Rayner – supposedly sighted a mermaid. The two sailors shouted at the rest of the crew to come and look. Hudson recorded it in his log as having a “tail of a porpoise and speckled like a mackerel.” She was “looking earnestly on the men” who gathered on the side to see her. The description Hudson wrote says she had very white skin, “speckled like a macrell” (mackerel), long black hair, white skin and a woman’s breasts – with the tail of a porpoise.

Dwelling on this subject, I stumbled on the following article published in the Inverness Advertiser for the 20th January 1832, about a “tame” mermaid spotted in Coigach:

Our contemporary says he has received a letter “from one of his correspondents on the west coast,” containing the “strongest assurances of the truth” of the circumstances narrated in the following extract of a letter, dated 14th current, the detail in which he had from the person who saw the Mermaid. He “was crossing in a boat from Ullapool, when opposite the Green Stone point, the crew discovered a figure, apparently that of a man, sitting upon a rock, and engaged in fishing. As it was unusual to find any person fishing on the Sabbath day, the men rowed the boat towards the object of their curiosity, and to their utter amazement found it to be partly the likeness of a human being, of which the uppermost half resembled a female, and was white as snow, and the other half was of a sky blue colour, and had fins and a tail like a fish. The monster was very tame, and the crew say that it did not seem to be afraid of them, and it had soft rolling eyes, and gazed at them for some time, occasionally turning towards some sea-maws that were flying above in the air!

Also, more recently, the New York Times published an article in 1886 about a mermaid sighted in Gabarus.

Apparently, mermaids were also surfacing in Canada during the XIX and XX centuries. At Point Grey, three fishermen allegedly saw a mermaid with yellow hair and brown skin rise her upper body above the surface and stare at them circa 1870 or 1880. Also, in 1967 BC Ferry passengers saw what they claimed to be a mermaid sitting on rocks at the entrance to Active Pass. Reports indicated that the mermaid had long blonde hair, the lower body of a porpoise and was sitting on the rocks eating a salmon. Photos taken by a man in an aircraft support the ferry passengers’ description. The Times-Colonist newspaper reported the sighting and printed the photo.

Also, there is a 1998 Sunday Times article about mermaids in the Karoo.

Finally, I discovered an excellent article about a connection between H.P. Lovecraft works and an actual South Pacific folklore…

… and it mentions Rein Mellaart’s interesting account [on Morotai during World War II], which was referenced in your The Field Guide.

Sources: Maymaygwashi; Henry Hudson; Coigach; Gabarus; Point Grey/BC; Karoo; and Rein Mellaart. [The urls for the sources were supplied by Xtrox, so if they don't work, they are not the fault of Cryptomundo. If you find a problem, let us know and we'll see if it can be solved. Thank you for your patience.]

The Field Guide to Lake Monsters, Sea Serpents and Other Mystery Denizens of the Deep. NY: Tarcher-Penguin, 2003. (with Patrick Huyghe)