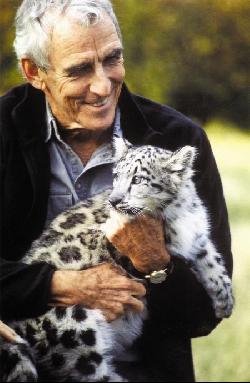 Peter Matthiessen, best known for his thoughtful, spiritual books such as The Snow Leopard and At Play in the Fields of the Lord, died Saturday, April 5, 2014, of leukemia, at a Long Island hospital near his home. He was 86. 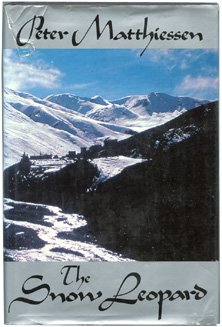 Matthiessen was well-known to serious cryptozoologists and Bigfoot studies researchers as being deeply interested and involved in the hominology field. (He also once wrote of his on-site look at the Loch Morar sightings.)

Peter Matthiessen attended the first modern conference on Sasquatch studies (captured in papers in Manlike Monsters on Trial and The Sasquatch and other Unknown Hominoids), in May 1978, at the University of British Columbia, Vancouver, B.C. The conference was filled with professors, scientists, and field biologists, some of whom spoke about the cultural implications and ramifications of the Bigfoot, Yeti, and Almasty. A few early figures in the Bigfoot/Sasquatch search also were there.

Besides Matthiessen, others at this 1978 gathering included Carleton Coon, Rick Noll, Rene Dahinden, John Green, Bob Titmus, Grover Krantz,  Tony Healy, Bob Walls, Bruce Bonney, Al Berry, Barbara Butler/Wasson, and Peter Byrne. Matthiessen would keep in touch with many whom he meet there for the rest of his life. The conference’s co-organizer, U.S.-Canadian anthropologist Marjorie Myers Halpin, UBC, died August 30, 2000, at the age of 63. The conference’s other organizer, Michael M. Ames, Professor of Anthropology, UBC, died on February 20, 2006, at 72.

Peter Matthiessen, in recent years, had given talks on the subject.  In Idaho on October 19, 2007, he spoke on the topic “A Naturalist’s Impressions of the Wildman.” He discussed his insights about Yeti and Sasquatch, in a lecture arranged by anthropologist Jeff Meldrum. 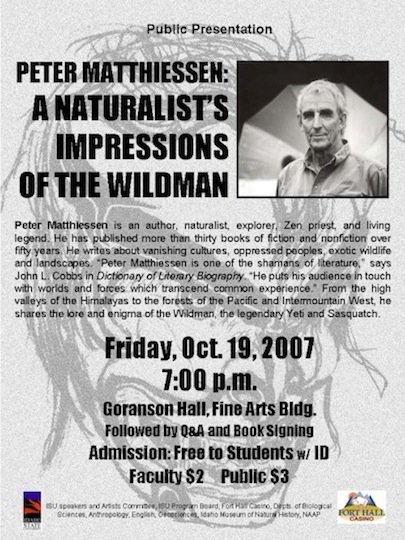 Those who have closely read In the Spirit of Crazy Horse recall that Matthiessen talked of the Dakota/Lakota traditions and sightings of their “Big Men,” the local name they gave for their Sasquatch. 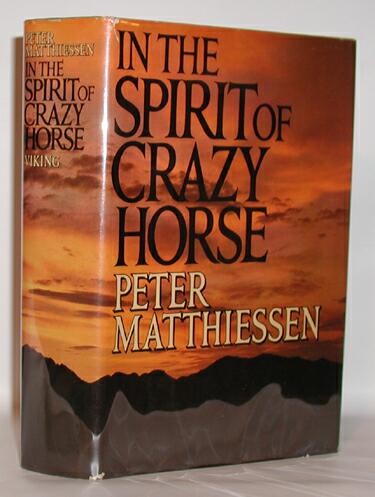 Peter Matthiessen (b. May 22, 1927, New York City, d. April 5, 2014, Long Island, NY) was an American naturalist and author of some repute for his historical fiction and non-fiction, having penned over 30 books.

Matthiessen was also celebrated as a literary visionary, although there is a revealing backstory. Along with George Plimpton, Harold Humes, Thomas Guinzburg and Donald Hall, he founded the literary magazine The Paris Review in 1953. In Doc about Harold Humes, a documentary that premiered in November 2006, by an Oscar-nominated filmmaker (one of Mr. Humes’s daughters), Peter Matthiessen admitted publicly for the first time that he was a young CIA recruit at the time he helped start the magazine, and used it as his cover.

Matthiessen’s thoughts on Bigfoot/Sasquatch/Yeti/Big Man were longstanding. He mentions Native American folklore and encounters with “Big Men,” a local expression for the Northern Plains Sasquatch, in his 1983 book In the Spirit of Crazy Horse. He had previously detailed his pursuit of the Yeti in The Snow Leopard, and he had a chapter on the Yeti in East of Lo Monthang: In the Land of Mustang, which is set in Tibet.

As a speaker at a Bigfoot gathering in 2009, I was able to meet and talk to Matthiessen, who was the keynoter. Those were some special moments, a rare treat, because his Zen Buddhist presence filled the space he occupied and beyond. His deep sharing of how intrigued he was by hominological topics was revealing.

Maybe the true high point of the conference was the banquet that evening featuring adventurer, wildlife author, and naturalist Peter Matthiessen as keynote speaker. Matthiessen is revered by wildlife experts the world over for his research on the snow leopard of the Himalayas. Matthiessen held the audience rapt with stories of his adventures. He discussed his own sighting of what may very well have been a Yeti in a remote and, at that time, previously unexplored Himalayan valley, his work with early Bigfoot researchers such as John Green and Rene Dahinden, and his plans for writing a book on the subject of the Sasquatch. It was truly a once in a lifetime chance to hear this man speak.

Peter Matthiessen, who was 82 at the time of this Texas appearance and quite healthy, gave an excellent talk, sharing Bigfoot material. He had not spoken too openly about his Bigfoot research since his 1983 book, In The Spirit of Crazy Horse, went into years and years of litigation.

The Oglala Sioux people are quoted (in his In the Spirit of Crazy Horse) about their relationship with their local variety of Bigfoot. The Lakota (western Sioux) call them chiye-tanka (chiha-tanka in Dakota or eastern Sioux) – chiye means “elder brother” and tanka means “great” or “big.” In English, though, the Sioux usually call him “the Big Man.”

“There is your Big Man standing there, ever waiting, ever present, like the coming of a new day,” Oglala Lakota Medicine Man Pete Catches told Mathiessen. “He is both spirit and real being, but he can also glide through the forest, like a moose with big antlers, as though the trees weren’t there… I know him as my brother… I want him to touch me, just a touch, a blessing, something I could bring home to my sons and grandchildren, that I was there, that I approached him, and he touched me.”

Matthiessen talked of Bigfoot but not in as great detail as he has already written about those in the Dakotas. At the banquet, it truly was enlightening to watch his nuances and shift in focus from the Dakotas to reports to the West, which often occurred more in tone than content. He also revisited his time in the Himalayas.

“National Book Award-winning naturalist-author Peter Matthiessen described a possible Yeti encounter in Tibet and said academia needs to keep a skeptical, but open, mind on undocumented species,” noted the Texas Observer in its 2009 review of that talk at the Texas Bigfoot conference in Tyler.

Matthiessen, the keynote speaker, is a tall thin man with sunken eyes and gray hair. As late-afternoon attendees sat outside discussing college football or sightings, he leaned against a railing, scribbling on a legal pad. His 1978 National Book Award-winning travelogue, The Snow Leopard, recounts how Matthiessen saw what he believed to be a Yeti in the mountains of Tibet. He had been brought to the Texas Bigfoot Conference by his friend, John Mionczynski, a wildlife biologist who in 1972 encountered Bigfoot in the Big Horn Mountains, which stretch from Wyoming into Montana. Contemplating whether to write a book on the subject, Matthiessen paused to muse on Bigfoot and his worldwide brethren.

“People have a need for story and myth,” Matthiessen said, watching a crowd form around Gimlin. “Most scientists are very skeptical. And they should be. But they shouldn’t have a completely closed mind about it. Remember the coelacanth, a so-called fossil fish? It was believed to be 200,000 years extinct and then turned up 20 years ago off the Madagascar coast. I saw some myself in a tank while visiting the Comoros Islands. So, you know, stranger things have happened than Bigfoot.”

“I’m all for mystery,” he said. “I think it’s going to be a very dull world when there’s no more mystery at all.”

The world is much duller without Peter Matthiessen in it! 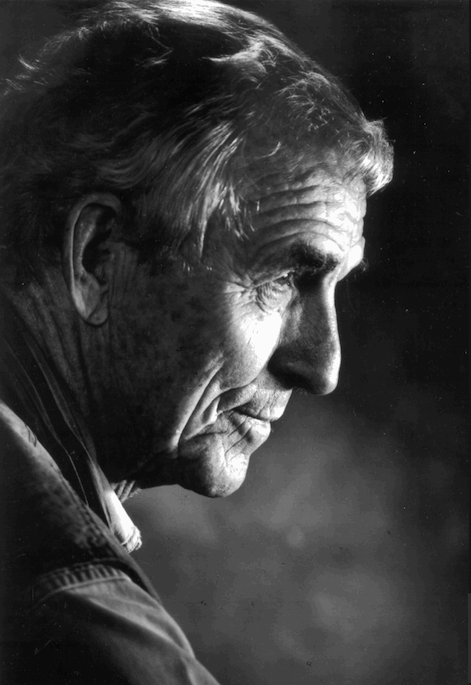 Previous Entry: Hank Hoax Dies: Bizarre Details Revealed in HuffPost Investigation
Next Entry: So You Want To Be A Cryptozoologist?