You are here: Home / Leprechauns As Proto-Pygmy Hominids

A Bit of St. Patrick’s Day Cryptozoology!
by T. Peter Park
I’d like to salute this year’s St. Patrick’s day with a cryptozoological reflection on a favorite theme of Irish folklore–the Leprechaun. Could Leprechauns be inspired by some sort of diminutive relict hominids? That was a suggestion I brought up eleven years ago, at the March 2006 St. Patrick’s Day luncheon of a local Long Island women’s club of which a friend of mine was “Queen” and had invited me as a guest speaker.
Leprechauns, as I told my audience, may not be just be a matter of legend and folklore. They may be something more than merely a charming, whimsical tradition repeated around Hibernian firesides from olden times. Rather, I noted, they are in fact as much a matter of occasional modern first-hand “close encounters” as any of the mystery hominids (Bigfoot, Yeti, *almas*, *kaptar*, *orang pendek*, *ebu gogo*, *nittaewo*, etc.) discussed by Loren Coleman and Patrick Huyghe in The Field Guide to Bigfoot and Other Mystery Primates (Anomalist Books, 2006). The Irish believed in Leprechauns because they sometimes actually saw them, just as people have actually seen the Bigfoot, Yeti, *almas*, *kaptar*, and *orang pendek*. The Irish even claimed to have seen them in the 19th and 20th centuries! Thus, I observed, Irish newspapers reported well-publicized “close encounters” with Leprechauns in 1938 and again in 1959. I summarized those reports in my Red Hat Society talk, basing myself on the accounts given in Jerome Clark & Loren Coleman’s *The Unidentified* (New York: Warner, 1975), pp. 57-58, and in Jerome Clark’s *Unexplained!* (Canton, MI: Visible Ink Press, 1999), p. 424. Clark in *Unexplained!*, p. 425, cited John Barry, “Fairies in Eire,” *The Living Age* 355 (November 1938), pp. 265-266, as his source for the 1938 County Limerick encounters.
In 1938, Dublin’s *Irish Press* reported, “Watching for fairies has leaped into sudden popularity in West Limerick.” By “fairies,” the *Irish Press* probably meant Leprechauns. Its reporter interviewed a number of men and boys who had seen and even chased groups of very short little men, who, however, “jumped the ditches as fast as a greyhound.” While they “passed through hedges, ditches, and marshes,” they “appeared neat and clean all the time.” They were 2 feet tall, with “hard, hairy faces like men, and no ears.” They were dressed in red, wearing knee breeches and short socks instead of shoes. This shows that the traditional red costumes occasionally persisted into the 20th century (Leprechauns usually wore red in traditional Irish folklore, green becoming more popular in the 20th century stereotype under the influence of the patriotic “wearing of the green”.) One of them also wore a white cape.
The sightings began when a schoolboy, John Keeley, met a short little man walking along the road at a crossroads between Ballingarry and Kilfinney, 6 miles from Rathkeale, in County Limerick. His story, however, met disbelief and amusement. His friends told him to go back and talk to the “fairy,” and he did so. He asked the little man where he came from, and was told, “I’m from the mountains, and it’s equal to you what my business is.” The next day, John Keely met two little men at the crossroads, while a group of villagers watched secretly behind some bushes. The little men were skipping rope, and “could leap the height of a man.” John approached them, and held the hand of one of them. The three of them–John and the two “fairies”–began to walk down the road, but the little men noticed the hidden watchers, and ran away. The next few days, more of the little men were seen and chased–but never caught.
A County Carlow farmer moving a large bush with a bulldozer in 1959 was startled to see a 3-foot-tall red man run out from underneath the machine, according to the November 9, 1959 *Belfast Telegraph*. The little man ran “about 100 yards across the field, over a fence into the field adjoining.” Three other men also saw the fleeing figure. Was the little red man, too, a Leprechaun, wearing the ancient bright red costume in defiance of the modern Irish patriotic “wearing of the green”? Or, since the question of clothing was not quite clear or explicit in Jerome Clark’s 1999 *Unexplained!* summary, was the County Carlow little red man really a red-haired grogoch, the Emerald Isle’s answer to Indonesia’s *orang pendek* and *ebu gogo*? 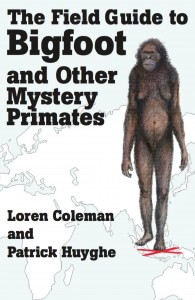 The cover here features a drawing of Richard Klyver’s concept of the Hobbit/Orang Pendek appearance.
As I noted, cryptozoologist Coleman and Fortean discussed various subtypes of mystery primates in The Field Guide to Bigfoot and Other Mystery Primates (New York: Anomalist Books, 2006, They described nine basic main types or categories of unknown hominids and other mystery primates: Neo-Giants (including most of the standard, “classic” Bigfoot, Sasquatch, and Yeti), True Giants, Marked Hominids, Neandertaloids, Erectus Hominids, Proto-Pygmies (including Sumatra’s *orang pendek* and the Flores *ebu gogo*), Unknown Pongids, Giant Monkeys, and Merbeings (including “mermaids” and *chupacabras*). In their Preface, Coleman and Huyghe summarized new primate and hominid discoveries since their earlier edition of 1999–including, of course, the discoveries, from late 2004 onward, of the 3-foot-tall *Homo floresiensis* “Hobbits” living on Indonesia’s Flores Island as recently as 13,000 years ago–who perhaps lived on into modern times as the small, hairy *ebu gogo* dwarfs of Flores Island aboriginal folklore. They noted that while the Flores “Hobbits” have often been connected in the media with Sumatra’s *orang pendek*, a more relevant connection might be with the more fully manlike types, such as Sri Lanka’s *nittaewo*.

Coleman and Huyghe do not specifically discuss Celtic fairies or Ireland’s “little people.” Describing their classification and terminology in their Introduction, they contented themselves with noting that “the term ‘Little People’ is too closely related to one type of folklore entity,” whose ethnic associations they do not otherwise specify (p. 13). In their geographical section on European mystery hominids, they discussed reported European True Giants, Neandertaloids, Erectus Hominids, and Merbeings, but no Proto-Pygmies. Harry Trumbore’s range map for the geographical distribution of Proto-Pygmies on p. 30, it is true, did show most of Europe, including part of their “Ancient Range”–but left Europe out of their Present Range, which includes Africa south of the Sahara, India, Sri Lanka, Southeast Asia, Indonesia, Oceania, northern Australia, and parts of North, Central, and South America–and Coleman & Huyghe’s accompanying text (pp. 29-31) did not mention a former European distribution.

However, I believe that European “fairy,” “gnome,” and “dwarf” legends, from Snow White’s Seven Dwarfs and the German *kobolds* to Scottish “brownies” and Irish “leprechauns,” do at least suggest a Proto-Pygmy population in parts of Europe well into historic times. Researching the background for my 2006 Red Hat Society St. Patrick’s Day luncheon talk, I came across quite a lot of material reminiscent of Coleman and Huyghe’s *The Field Guide to Bigfoot and Other Mystery Primates*! Irish “Little People” traditions, I found, describe several types of what Coleman and Huyghe might call Proto-Pygmies. Besides the Leprechauns themselves, Irish folklore also describes the *fear dearg* or “Red Man,” the hard-drinking Cluricaun, and the hairy reddish *grogoch*, the last being almost an Irish *ebu gogo* or *orang pendek*! 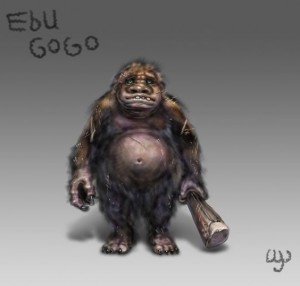 The Leprechaun, as we all know, is typically represented as a little old man 2 or 3 feet tall, dressed either in all bright red or all bright green clothing, who makes shoes for the other fairies and guards a pot of gold. Whether red or green, his clothing is generally an old-fashioned version of European dress, recalling mediaeval or Victorian costume. Red was apparently the most common original traditional Leprechaun costume color, but green became more fashionable in the 20th century with the modern Irish patriotic “wearing of the green,” and is now universal in American St. Patrick’s Day Leprechaun imagery. The *fear dearg* or Man in Red is a Leprechaun-like dwarf dressed all in bright red who loves to play nasty practical jokes, but also helps humans trapped in Fairyland to escape. The Cluricaun is a red-nosed Leprechaun-like dwarf who sneaks into people’s houses at night to drink all their wine and eat all their food while also racing and harnessing their dogs, cats, pigs, or goats at night–some folklorists think he’s just a Leprechaun on a spree! The *grogoch*, finally, is a hairy naked red dwarf 3 feet tall, unclothed but covered with reddish hair, who lives in caves or hollow trees, but can be persuaded to come indoors and perform Irish farmers’ household chores. The description of the *grogoch* reminds me quite a lot of the Flores Island *ebu gogo*, and sometimes makes me wonder if *Homo floresiensis* made it all the way from Indonesia to Ireland in  prehistoric times! 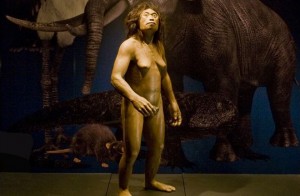