You are here: Home / Identify the Skulls: Answers Update

The identification of skulls is a good skill to acquire in working in the field of hominology, a subdivision of cryptozoology. I’m no expert, and I’m sure many of my readers have fine-tuned this skill more than I have. With that in mind, today, let’s play a little id game with a group of skulls.

Michael Swords is the archivist in charge of housing the late Ivan T. Sanderson’s Society for the Investigation of the Unexplained (SITU) collection for the Society For Scientific Exploration, who acquired it. He has done a remarkable job organizing the old SITU files, and is to be congratulated for his labor in this realm.

In a recent entry on the status of the assemblage, Swords wrote of various items in his sort. (I’ll have some more to say about that later, including that troubling Shipton business again. See “A Short History of the Shipton Snowman Track Photographs and the Tchernezky Cast,” and “Shipton Yeti Created Cast: Keel’s Misstatement.”) But when discussing the new shelving he’s been working on for the collection, Swords notes that

Sharp-eyed observers might have noticed a Gigantopithecus skull [reconstruction by Grover Krantz] and five pre-modern Homo-whatevers on the top of the shelving in the rear. They weren’t part of the collection, but I’m donating them to it. Better with SITU than my own stuff.

I thought it would be fun and a good challenge to try to id these. I took a segment of his photo of the room, and enlarged the row of skulls from that image. If Swords knows the proper answers, he can grade me and any comment makers below.

So, lets go from left to right.

This first skull is behind part of a shelf, so I’m not sure, but I’d have to guess this might be a skull replica of the “Peking man,” Homo erectus pekinensis (Pithecanthropus pekinensis).

Or what is shown could be a skull replica of an Australopithecus, like Lucy. Need a better image.

The second skull copy in from the left is difficult to id, as well. It might be a Homo erectus (Java Man or Peking Man), or more probable, an archaic Homo sapiens, as is the example above. Need a better photo. 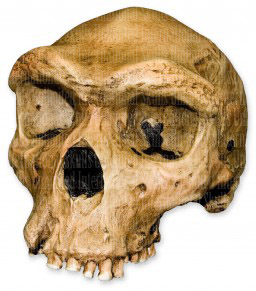 The third skull copy in from the left is definitely Broken Hill 1 (today called the Kabwe skull), the Rhodesian man (Homo rhodesiensis), which some paleoanthropologist have classified today as Homo neaderthalensis or Homo heidelbergensis. It was found in Broken Hill, Northern Rhodesia (now Kabwe, Zambia) in 1921 by Tom Zwiglaar, a Swiss miner. The brow ridges, plus eye and nose cavity shapes give this away, but it is the notch on the right side of the skull’s dental area that makes this a positive id.

The fifth from the left, the darkest skull, is a replica of the original “Old man of Crô-Magnon,” today located in the Musée de l’Homme, Paris. The initial Cro-Magnon find was discovered in a rock shelter at Les Eyzies, Dordogne, France. The type specimen from the site is Cro-Magnon 1. The French geologist Louis Lartet discovered the first five skeletons of this type in March 1868 in a rock shelter named Abri de Crô-Magnon. Homo sapiens sapiens.

The last skull model, on the right in the row in the photo from Swords above, of course, is the reconstruction of Gigantopithecus, as Michael Swords mentioned. Here Grover is shown with his Giganto model on the left, compared to a gorilla skull on the right.

Michael Swords id’ed the skulls later in the day, in reply to the above:

Loren has taken the opportunity to have a little detective enjoyment by figuring out the skulls on the top shelf of the one picture. The big one, as mentioned, is Grover Krantz’ reconstruction of Gigantopithecus. The others were plastic-like models purchased a very long time ago from Carolina Biological Supply Company [which I used in science lectures at WMU]. They turned out to be great size comparisons for Grover’s Bigfoot candidate.

Here are the skull identifications via Carolina:

1]. next to Gigantopithecus: Homo sapiens sapiens [ourselves], “Cro-Magnon Man” skull reproduction from the Vezere Valley in France.